Chicken broke her leg two weeks ago, when should I take of the splint?

Hi, I have a black star hen who was stolen right out of the coop two and a half weeks ago while I was on vacation. My workers were taking care of them, I completely trust them, but a thief came in the night and stole one of them while leaving the other two lose after ripping off the chicken wire leading to the run. My workers searched and searched for her, thankfully twenty-four hours later they found her at the corner store after receiving a call if we were missing anything, because the thief tried stealing for them too. My worker went, and there was my chicken, all beaten up and sad. When I got home, I noticed she wasn’t standing up or anything, she looked awful and I thought I was going to lose her.

Thankfully here in Mexico there is a farm animal vet at every corner, and that means special chicken vets. I took her to the vet and they did xrays, and her leg was fractured which was why she couldn’t walk. She also had a stomach infection she picked up while gone, leading to weird poops and a pale comb but that was taken care of with injections i had to administer myself for three days.

For the first three days she would not stand after the vet put her leg in a splint, simply drag herself with her wing, and from then on she started testing her leg more and more. Now she walks but with a limp, I think she’s healing a bit crooked, but just in two weeks she’s so much better than I could’ve imagined. I have her quarantined in the chicken coop while my other two are in the run, I wanted her to heal with her sisters there. Now she’s pissed off 24/7 because I’m keeping her quarantined, and she’s ready to fight her sisters and go find some worms. Yesterday I had the pleasure of watching her shoot across the coop and attack a house gecko before gobbling it up, but I don’t think letting her out is a good idea. I don’t think she’s ready though, she’s been splinted for two weeks and I want to know when I can take the splint off/let her be with her sisters?

Poor baby was stolen in the middle of a molt and also had feathers yanked out, but is looking much better! Trust me, she looked way worse when she’s usually such a beautiful hen! 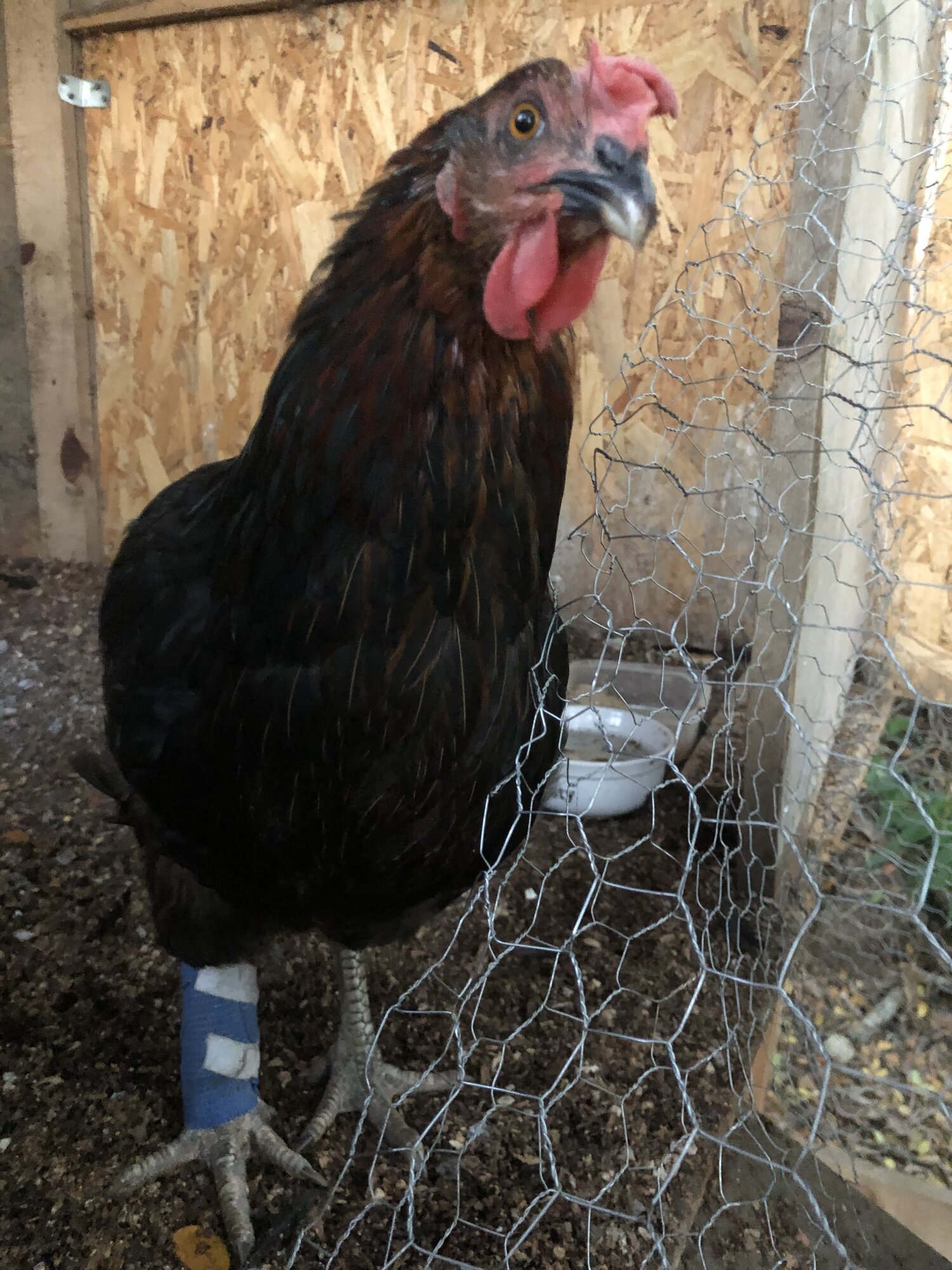 It’s really your call, you can take it off and see if she limps or is unable to use it at all. I still would keep her separated for another week after the healing process to make sure nothing gets re-injured or damaged further. You can have her be with the flock with the splint, but I don’t recommend it in case she can’t get away or if something happens. I hope your girl gets well soon!

B
Posey Broke Her Leg