Hey everyone! I’m new to the chicken world and I find chicken genetics to be super interesting but also confusing. I’ve tried doing research online about genetics of feathering and egg shell color but sometimes I read opposing statements on different websites. My question is: does anyone know of a good chicken genetics book? I’m looking for one that explains which genes are dominant and recessive on feathering and egg color, information on breeding for quality, cross-breeding, and plenty of pictures and good illustration. Thanks in advance!

You might find these interesting. The first is kind of technical, may be close to what you are looking for.

The second one is a 2012 thread on here where your question about books was asked.

The third you may have seen, it is a fun calculator to play with. There is a bit of a learning curve and it is kind of simplistic but I learned a lot from playing with it. To me the hardest thing about using it is to come up with the tarting genetics.

I don't believe leg feathering or egg color have dominant genes. Both of these traits are skewed by each parent and do not turn on or off, as with dominant or recessive. These two traits blend the parent genetics. Like egg color, a dark egg parent crossed with a blue egg parent begets green eggs. Or a white egg crossed with dark egg begets tan. Feathers on legs may indeed turn off or on but if feather leg in ancestry you'll still have stubs. It's not a total off switch and must be bred out over generations.

Each parent will contribute one gene to the chick. Which gene the parent gives the chick gets from that gene pair is random. If either parent is pure for the blue egg gene (Both their genes at that gene pair are blue) a pullet will lay a blue based egg as the chick is guaranteed to inherit at least one blue shell gene.

Maybe graphically will help. Consider O as the blue egg gene and o as the not-blue (white) gene. If one parent has O,O and the other has O,O or O,o or o,o. The chick will wind up with either O,O or O, o and lay a blue-based shell. It will get at least one blue gene.

If both parents are O,o then the chick could wind up with O,O, or O,o or o,o. So a pullet might lay a blue-based egg or a white-based egg. It's just luck.

If both parents are o,o (no blue egg gene) the the pullets will all lay a white based egg.

That may sound complicated but it is pretty basic, pure dominant/recessive genetics.

Some of those 13 genes that contribute to brown are dominant, some are recessive. Some will only act if another certain gene is present. There is even a sex linked gene that bleaches out some brown. Most brown is put on top of the after the base shell has been added, you might think of this as a paint job right at the ed of the egg-making cycle. If you scrape the brown or green off you can see the base color. Or when you crack the egg and remove the membrane so you can see the inside of the shell you can see the base color. But there is one gene that can tint the shell all the way through. It's not very dark but it can keep a white egg from being pure white. A blue egg will still look blue with that gene.

Brown is a mess. How those dominants and recessives get passed down and how they go together can give you a lot of different shades of egg shells even from full sisters. Sometimes you can get some big surprises.
H

Thank you to everyone who replied!! Ridgerunner - the links you posted were exactly what I was looking for and your explanation went right along with what I read and it’s starting to solidify in my mind, finally! I had a basic knowledge of genetics from college biology classes but I was thrown off by some of the things I’ve read online, posted by people who misunderstood genetics. Thanks so much for your help!

Sittin on a rock

I just saw your post, if you are looking for books still, here a 3 that deal with color that I have on my shelf. Each is a bit different, but I refer to all 3 from time to time.

Sigrid Van Dort's is really good with a lot of straight forward info and illustrations but it is spendy, but very good, I like Brian Redder's book a lot, and Grant Brereton's is helpful too. 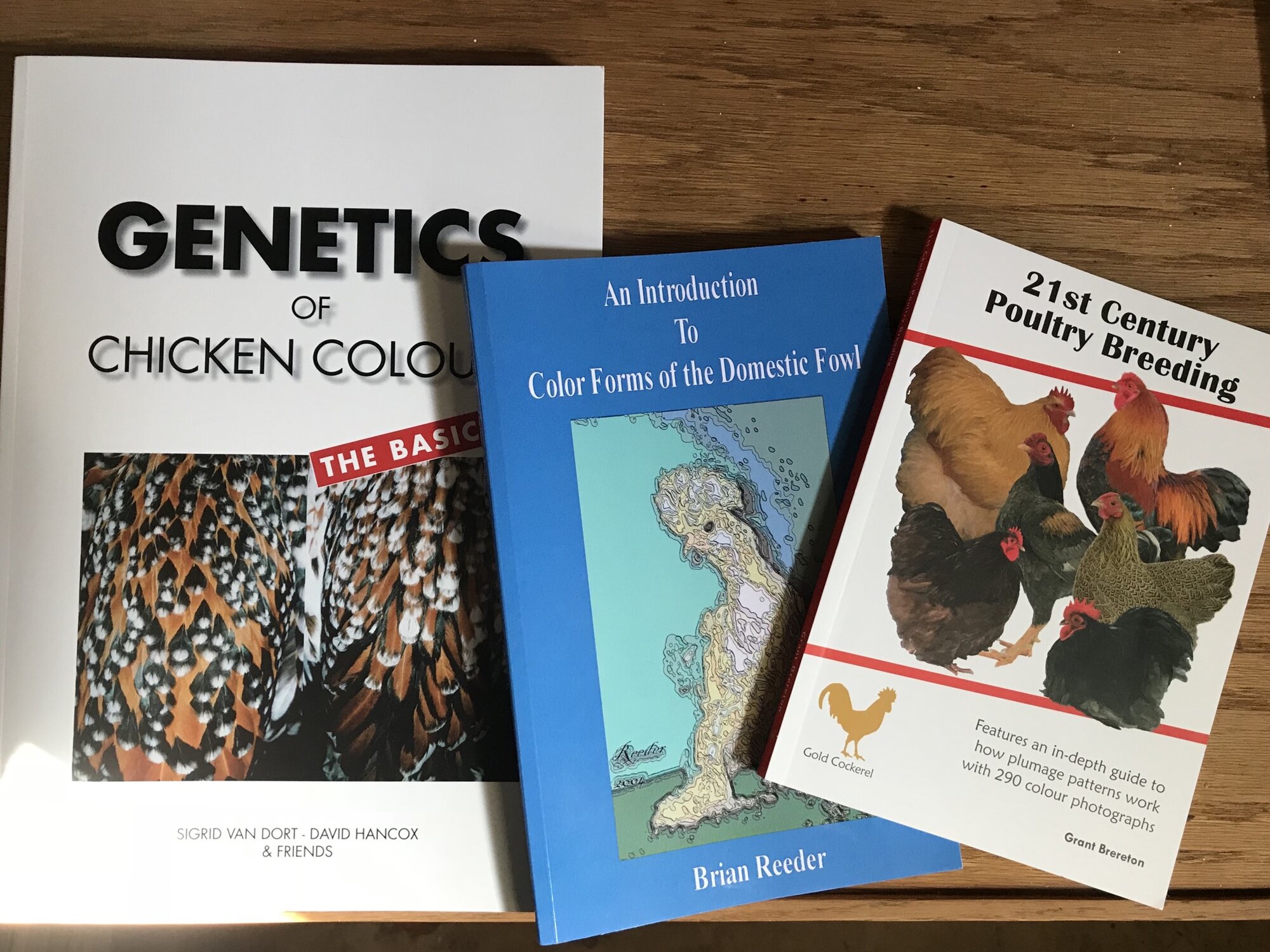