The battle:
The 3 SLW got into their heads that the coop nesting boxes were not up to snuff and so took to laying their eggs in the duck hut. The duck hut is only temporary till the duck pen is built. So I closed off the duck hut to the chickens during the day (since my duck always lays her egg early in the am, before the hens are let out). OK this worked for about a week. Now the duck won't lay in her own nest, but out on the ground near the coop. Those darn SLW are now finding anywhere to lay their egg but the coop. I only got 5 eggs yesterday so I knew that they were at it again but where. I found one egg today in-between two trash cans that I had brought in the yard to clean up the yard with. I know the egg was from yesterday because I was watching them this morning.
So back to opening the duck hut and letting them have it to lay eggs in. At least I will be able to find them then.

*But what will the future hold*
My plans are to build a duck pen. We are re-homing the chicken killing dog this weekend. I want the added protection of my good dog to keep cats and other land walking predators out of the coop, so we are planning on re-building the dog house under the coop itself (it stands 2 feet off the ground) and letting her have run of the backyard. I really hope that I don't have to build a nest box off the dog house too.

I too have lost the battle. I collect an egg here every day from my sneaky Icelandic pullet. This shelf is 4 1/2 feet of the ground and she has to get around screening blocking it. 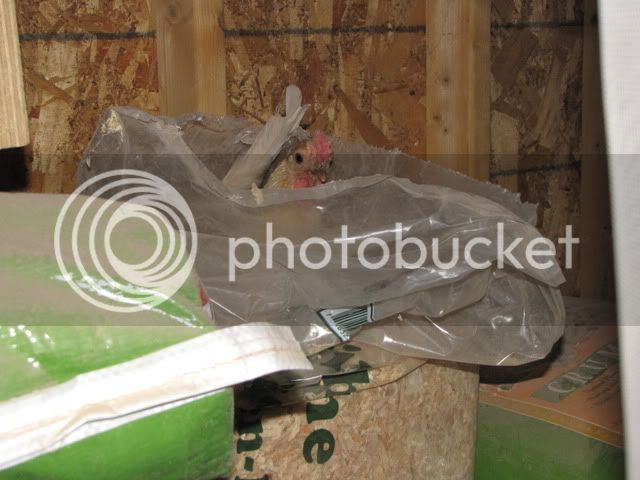 She's too much of a diva to use a lowly run of the mill nest box.

M
Why can't they lay at the same time?
2

D
my chickens are still eating their eggs
2 3 4

WHEN TO INSTALL THE CERAMIC EGGS...
2