We have a flock of 8 chickens, 1 rooster, and 2 ducks in a large coop with attached run. I don't know the exact dimensions, but it's not a pre-purchased chicken tractor, it was custom made and it is definitely spacious. Flooring is concrete to prevent raccoons from digging in (a problem we previously had), then covered generously with shavings that are changed regularly. There is a small tank for the ducks to swim in and a roof on top with rafters the chickens like to sit in. Just to give a general picture of their living quarters, if that matters. We have been told to get some sand for them to dig in, and that is next on the agenda.

Anyway, the chickens are losing feathers. It is most evident on the hens instead of the rooster, but he's losing some and I don't think the ducks are affected. I don't think it's boredom or that anyone is being picked on since it's so many of them and they don't ever fight or anything like that. Most of the birds seem to just generally have all over patches where they clearly don't have as many feathers as they used to, but one bird in particular is missing all the feathers on her rear end.

I've been doing some reading and it seems there are two main concerns: mites/lice or lack of protein. They're fed a layer feed + all sorts of kitchen scraps so I don't think the protein is the issue, but maybe? That leaves mites/lice. Do you know if that is what it sounds like or if there is a way to confirm? Is there anything else that could be causing this that I am currently unaware of? They seem healthy and active otherwise and are laying eggs like normal.

Is it normal for most of them to start at once? And for one chicken to have an entirely bare behind?

I would think mites and lice. Check them over.

How old are they?
Can you post pictures?
What are you feeding? (Brand, protein percentage, how many scraps) 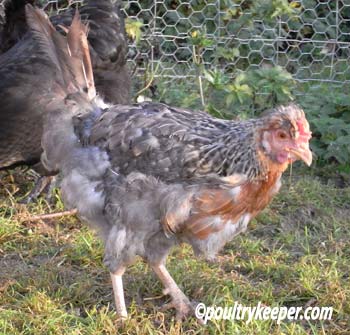 Are the bare patches filling with spiky feathers like this: If so, they're probably just moulting. It's very much the right time of year for it.

All six of my hens are molting, only my orps lost butt feathers but growing in nicely. Hopefully it's not mites/ lice or anything.

dehartma said:
Is it normal for most of them to start at once? And for one chicken to have an entirely bare behind?
Click to expand...

Yes, that can be normal. It depends on if they are the same age.

M
Loss of feathers on back- help!

P
Chicken losing feathers on head and neck...what is going on?