Chickenspeak: a story about Priscilla, Queen of the Coop

This is a little story I am writing for one of our members, who operates Sterling Hatchery in Alaska, and who has a darling Polish who was attacked by her fellow brooders. My version is fictional- you'll have to ask her about the real Prissy!

Priscilla Queen of the Coop

When Miss Prissy was introduced to the brooder flock she expected to be greeted graciously, but it was not to be. She knew she was beautiful, because her human mother had told her so, but for some reason the other pullets attacked her head feathers the moment her feet touched the pine bedding. Not only that but they crowded her from the light cone of the lovely infrared bulb and cheated her of her rightful share of chick starter and even water. She was three weeks old, and so were they, and they should know about etiquette. 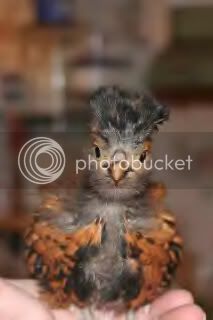 It was so rude, and Prissy had to run for cover, ducking and weaving to avoid their vicious pecks. She was relieved when Mother Tori swept her out of the brooder and into loving arms, but equally confused when told that, in time, she would have to go back. Maybe she could eat and drink and *then* go back, she thought.

But how to enter the protocol of the sister flock? Prissy called to a young roo who had temporarily been placed in a nearby cage after a careless fight with a prince of the flocks, but his explanations were more gobbledygook than chickenspeak. A rumor circulating among the 'special cases' cages suggested he might have damaged more than his tail feathers. Annoyingly, he seemed overly interested in her after their 'conversation', but he disappeared a few days later, amid rumors of human guests and stew.

Later one evening when Mother came to huggle her, as she always did, Prissy was more than eager to crowd her human hand and peck for reassurance. She was devastated when Mother scolded her for a hurtful peck, and Prissy crowded deep into her bosom for reassurance.

Then Mother T, for that is what Prissy liked to call her in silent reverie, began to sing. Prissy didn't know who Joe Cocker is, but he must have been a chicken because the words were perfect for Prissy and she memorized them, every one. Caught in a gentle sway as Mother T sang, Prissy nearly fell asleep, but she forced her young brain to believe what she was hearing.


The next day after a sweet awakening under her private lamp and a good feed, Prissy again found herself in the air for a song and a huggle, followed by a careful lowering into the pine shavings. At first Prissy stood very still, hoping not to be noticed, and that seemed to work for a while. Mother T kept her right hand flat by her side, and Prissy heaved a sigh of relief.

Not for long! The entire contents of the brooder box forged in her direction, swarming her, climbing on her and ripping out at least three of her head feathers before Mother T could cup her body and lift her far out of harm's way as the other girls sniped at her legs and tried to jump up at her belly. This was beyond rude and Prissy swallowed hard, because someone had mentioned that chickens that don't assimilate with the flock find themselves gone. She wasn't sure what 'gone' was, but she knew she wouldn't like it. In fact she wasn't clear on 'assimilate' either.

Prissy could see the brooder from her cage through a window. She had lots of room to run and peck, and she found herself charging the door over and over in an attempt to reach the others. When Mother Tori noticed this she brought Prissy something called a parakeet mirror, which had a little bell hanging from the bottom. Prissy loved the image in the mirror, and learned to ring the bell, which sometimes brought Mother T in for a huggle. Extra huggles were something Prissy needed. Prissy wondered why the pretty pullet in the mirror would approacher her, but not cross necks, or bawk at her. Mother T spent long periods watching Prissy and one day she 'aha-ed' and left chuckling. Prissy preferred her mirror friend to the others now, though she wanted conversation of the chicken kind.

The next day Mother T gently lowered a small box into the brooder, upside down. Prissy noticed a bell-like sound and a mouse-sized door in one side. After much gesturing and straining of her neck, she bent well down to look inside. It was dark in there and she backed off, muttering, only to return over and over. Soon she noticed an image in there, and concluded that it was another mirror friend, so she spent her time telling the first mirror friend about the second one, not understanding why the three of them could not be together. Once, Prissy stuck her neck inside the box, demanding that the new friend join them, to no avail. What a divine flock they could be, she thought, and longed for them to join her.

Two days later Mother T gifted Prissy with her first roost, after noticing Prissy atop the box calling for all and sundry to join her flock. Prissy loved the roost because it was higher than the box and gave her greater bawking distance. The ends were triangular panels, and if she kicked the roost at ground level it would flip over onto another side, and yet it always looked the same. It amused Prissy at several levels, and allowed Mother T to speak to her about many things, to stroke prissy on the neck and to encourage her to exercise.

There was a continuing problem when Prissy saw Mother T's hand- her excitement still led to pecking, and Mother had to deny Prissy huggling when it happened. Over and over they experimented with each other, and though it took a long time, Prissy learned that affection and treats depended on being gentle. In fact the expression 'Gentle, Prissy' often preceeded an approach by the much-beloved hand.

Prissy learned that there are human roos, she hadn't seen one but she overheard nearby voices, and one of them was far deeper and louder than Mother T's. Though humanspeak isn't her strong point, she had learned much from Mother T and she was dismayed to hear certain phrases

"So, why did you bring her here anyway?"

"She was the only one left in the chick pen when I went to get feed and electrolytes and I feared for her, Babe."

"I know, I don't understand why the brood went at her, why does she let them *do* that?"

"They're chickens, T, you know they attack anything different'"

"Yes, well, I just thought I could make it work."

Mutterings continued, they must have been walking away and Prissy craned to listen, without success.

By now Prissy was a month old, and very lonely. The birds in the brooder had been moved, and though she could hear chickens in the distance, she could not get close. Mother T huggled her several times a day and took her to the plank floor to exercise, but it was very quiet. Sometimes she brought carrot heads, or an apple so Prissy could play with them.

The mirror in the cage and the other in the box intrigued her though, and one day as she roosted in the cage, she heard both bells tinkle, followed by the most amazing sounds- sounds she remembered from her own hatching- little pee-peeps and tiny coos. She shook her now-feathering neck quite forcefully and hopped down, strutting because after all, it is a chicken's job to strut.

The moment one of her feet appeared at the little door in the box, Prissy was startled to see a baby beak briefly outside the aperture. She squawked, pulled back but then bent down, blinking. The beak appeared again, and then another, though both withdrew to the sound of baby solicitations. Prissy was vaguely aware of Mother T looming over her, and she called to the beaks the same way she had called to the brood weeks before, though at first they did not respond. So Prissy demanded that they answer and to her astonishment and the merriment of Mother T, they did!

"Gentle, Prissy," Mother T reminded, and Prissy looked up and accepted a stroke before lowering her head and summoning the beaks again. By now the human roo had joined Mother T, and whispered to her,

"I'll start the other run today if this works." And he kissed her neck and left.

Prissy knew that her future depended somehow on this, and her beating breast showed how much she wanted these babies. She called them again and again, and received a mixture of fearful peeps and longing coos. The Mother T wiggled a winger in front of the hole and the babies came out. They have feathers like my mirror friends, Prissy thought, but left them alone.


"Meet Sunshine and Vesper, Prissy," she explained, "they're from a second hatch where you were born, and you must be gentle."

And Prissy was. If anything she was a bit fearful of the two, after her experience with the sullen brood and she kept her head feathers well away. It was a relief to have a little one push against one's breastbone and cheep for warmth. Prissy showed them the lamp, the water, the feed and danced around them for hours. She wasn't half as relieved as Mother T, who had a second home arranged for Prissy, but who more than anything wanted this bird.

Sometimes it works out. When it doesn't, things go badly. As time passed and Vesper became a sister pullet, Sunshine turned out to be a roo. He became a princely addition to the flocks and has his own run with these, his own girls. But Prissy became Queen of the Coop. I mean, what other pullet had her own roo and her own sister brought especially to her?

It was a new day for Mother T and her human roo, too. Seems they now breed Polish.

The little story had to have a happy ending, of course.
A lot of you have had problems with your shipped chicks this year, so Prissy has to conquer...heh

Thanks for sharing that beautiful story.

I love stories like that, the ones that make animals seem human in a way.

So beautifully written - thank you.
This could be published.
My hope is that before too long, our species becomes more compassionate toward our feathered friends.......stories like this would help open eyes...and hearts.
JJ
Last edited: Apr 6, 2008

and p.s. That has to be one of the cutest photos ever!
JJ

Thanks- Isn't that a gorgeous photo? It' from Sterling Hatcheries, Mother T is away for the week-end and I'm wondering how`Prissy is doing...
Last edited: Apr 6, 2008

That is so beautiful, thank you for sharing.

N
Hens not getting on

M
Advice for my older Hen