Okay, so the chicks arrived this morning. Two of the babies were DOA. The rest are all a eatin' and a drinkin' and a peepin their little heads off. They don't even seem to be really chilled because they'll stop under the light for a few seconds and then run off to do something else....like peck at the red arrow of their thermometer.
Now for the problem. I asked that hooligan's silver laced cochin be marked so to be able to tell it from my brahmas. We weren't worried about her other chick, a JG, being marked (no feathered feet). They marked 2 of the feather footed chicks!(my roos)!

One of the deceased ones was a runt and hardly no dark markings at all, so I'm fairly certain it was one of my light brahma pullets. I ordered a dark brahma roo and a buff brahma roo.
UPDATE: I was wrong! The two marked chicks are my buff and dark roos! Now's more than ever it's imperative that we find a way to spot the cochin. My SO and I have been staring at pics of the two chicks, brahma vs. cochin for about an hour trying to find a difference. I've e-mailed Teri @ Ideal for help.
Here's some pics. I initially forgot to put the paper towels down, but it didn't seem to be a problem. We are using the large flake pine shavings and the only thing these guys seem interested in eating is their food! I've already had to top off the feeders! I see them pick up a flake from time to time, but they spit em right back out and go back to their feeders. Not real good pics. I'll get more later. Hooligan, I PMed you and I hope you bought plenty of chick starter; because your JG girl stays in the food dish!
Hooligan's JG with her buddy 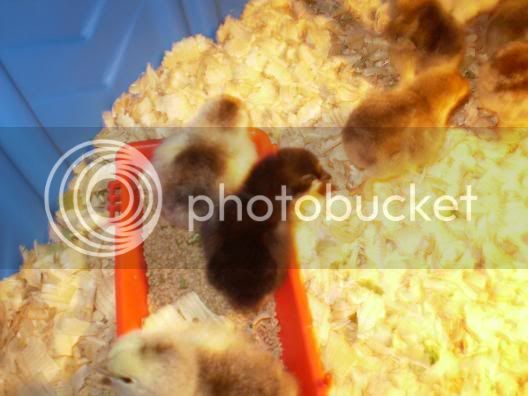 She's in the feeder again! 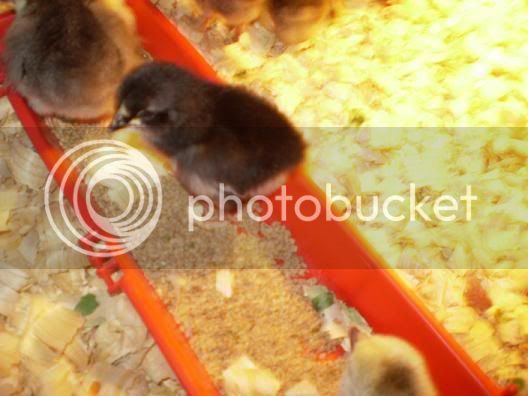 Half of the gang in their food! (Notice the JG is at the feeder again? LOL 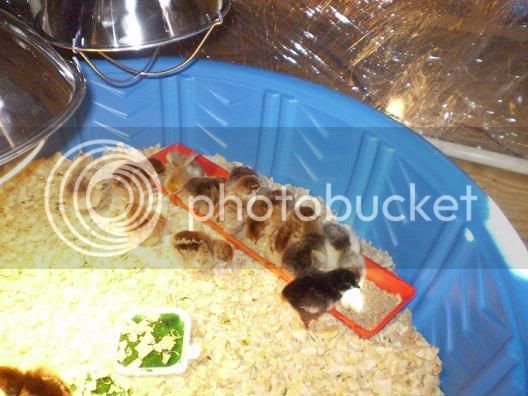 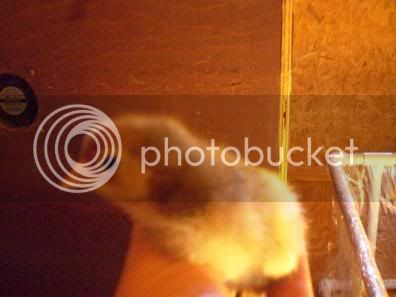 Sorry I can't help here.. we are still trying to figure out what type of chicks we have ourselves!! But I can say that your babies are adorable!!

Look at their combs. Cochins have single and brahmas, pea.

Here are baby pix of our Mottled Cochins from last May...not sure if they'll help you or not...

Good luck figuring out who's who!

I can see the pix...first time ever, must be bc they are working on the 'net here at work!
I can't wait to get my beebees!!!
What are you feeding them? It look smaller than my crumbles, which I think look big

Hooligan,
It's chick starter that I bought at a new feed store in town. They usually sell it in 50 lb. bags, but sold me ten pounds for a start. It's a brand name, but I'm too frazzled right now to remember it. They seem to do just fine with it. We just got back from town. I broke a couple of traffic laws trying to get our errands done and get back to the babies! Not a problem when you've got a cop in the car with you

Willsmama, thanks for the reply. I'm in love already. Good luck with figuring yours out.
Dawn, thank you! thank you! thank you! for posting those pics. My SO and I will use the pics and Kev's advice to guide us when we try to figure them out. I did notice one has "eyeliner" that extends from the outside corners of it's eyes almost to the ear opening. Do you think?
Kev, a big thanks to you too.
Anyhow, up so early and running around. I'm exhausted. The chicks are fine and I'm going down for a nap.
Any more imput on the cochin dilemma would be greatly appreciated.

Okay, I heard back from Teri @ Ideal, prompt response as always. They are going to credit my account for my two lost chicks.
Teri advised me to look for the darkest chick with the darkest legs and the single, prominant comb. That should be the cochin. I'm still having a bit of trouble even finding the comb, but if I go thru the chicks one by one hopefully it'll become obvious.

Hooligan, your JG is still sweet. I'll try to get better pics tomorrow. My SO just went to check on them for me, while I napped, and reported everyone is just fine.

Woohoo!
Glad all are doing fine. My girls will be sooo spoiled!

Try checking the JG to see what a single comb looks like on a chick and looking at both of the sexed brahma cockerel's combs to see the difference. If necessary, smooth down the fuzz on sides of the comb to see it better.

Good luck and enjoy your new babies, both of you!

Kev,
I sent you a reply! Thanks again!

Our certainy level is now about 98%.
My roos have names! Apollo and Zeus.