I posted before about my 6 chickens asking for help with sexing and breed. Now the chickens are about 10 weeks old and look like real, grown-up birds! I'm still not sure about breed; they were sold as New Hampshire Reds and kind of look like it now (except for one). I'm pretty confident 2 are roos, but not as clear with the other 4. I thought it'd be fun to post again with more pictures! They grow up so fast!

The two suspected roos; huge combs and wattles compared to the rest, one is getting curved tailfeathers. The one on the left was obviously a roo from a young age (slow wing/tail development, early comb/wattle development) but the other didn't start showing roo signs until much later. Interesting! 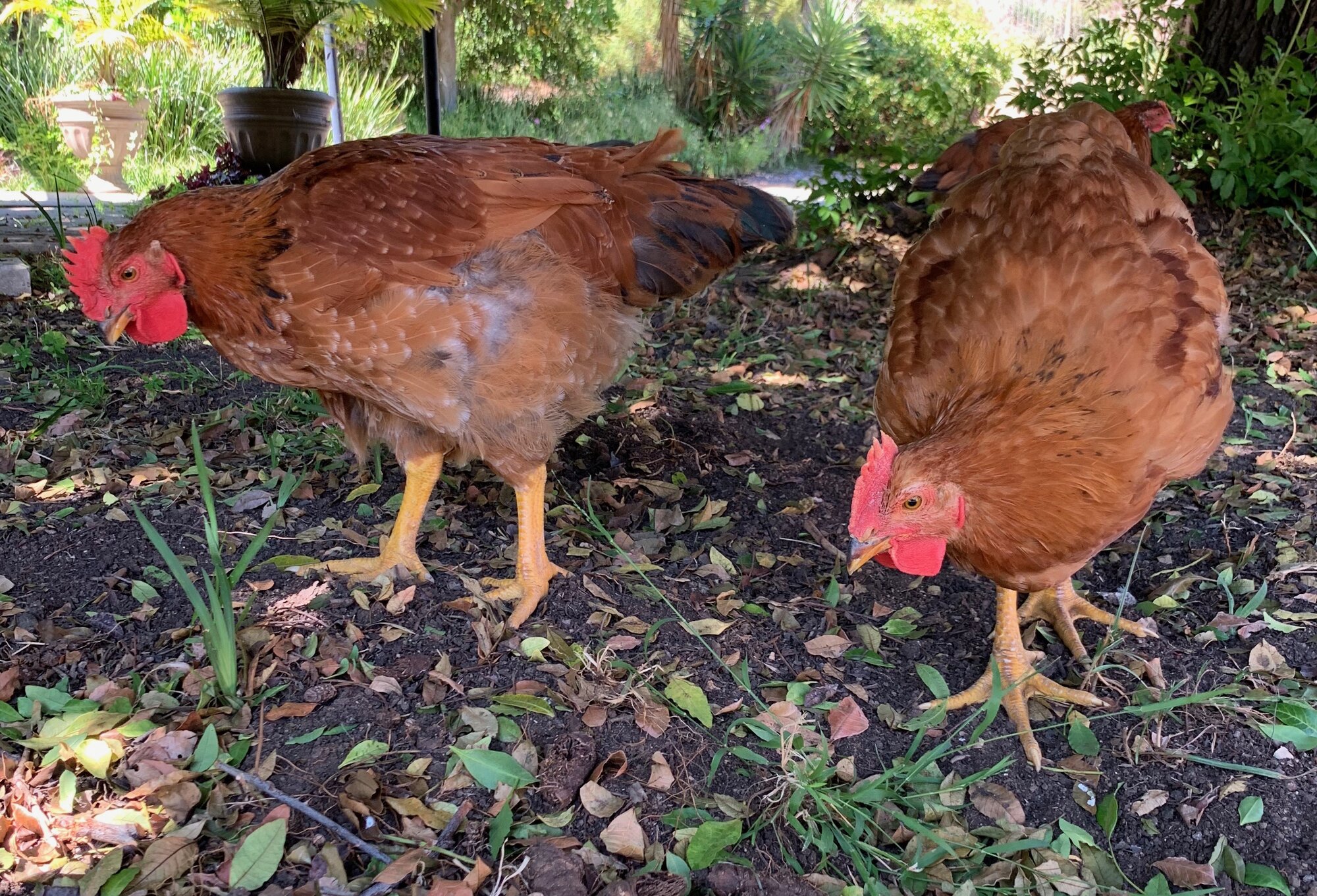 Pretty sure this one is a pullet 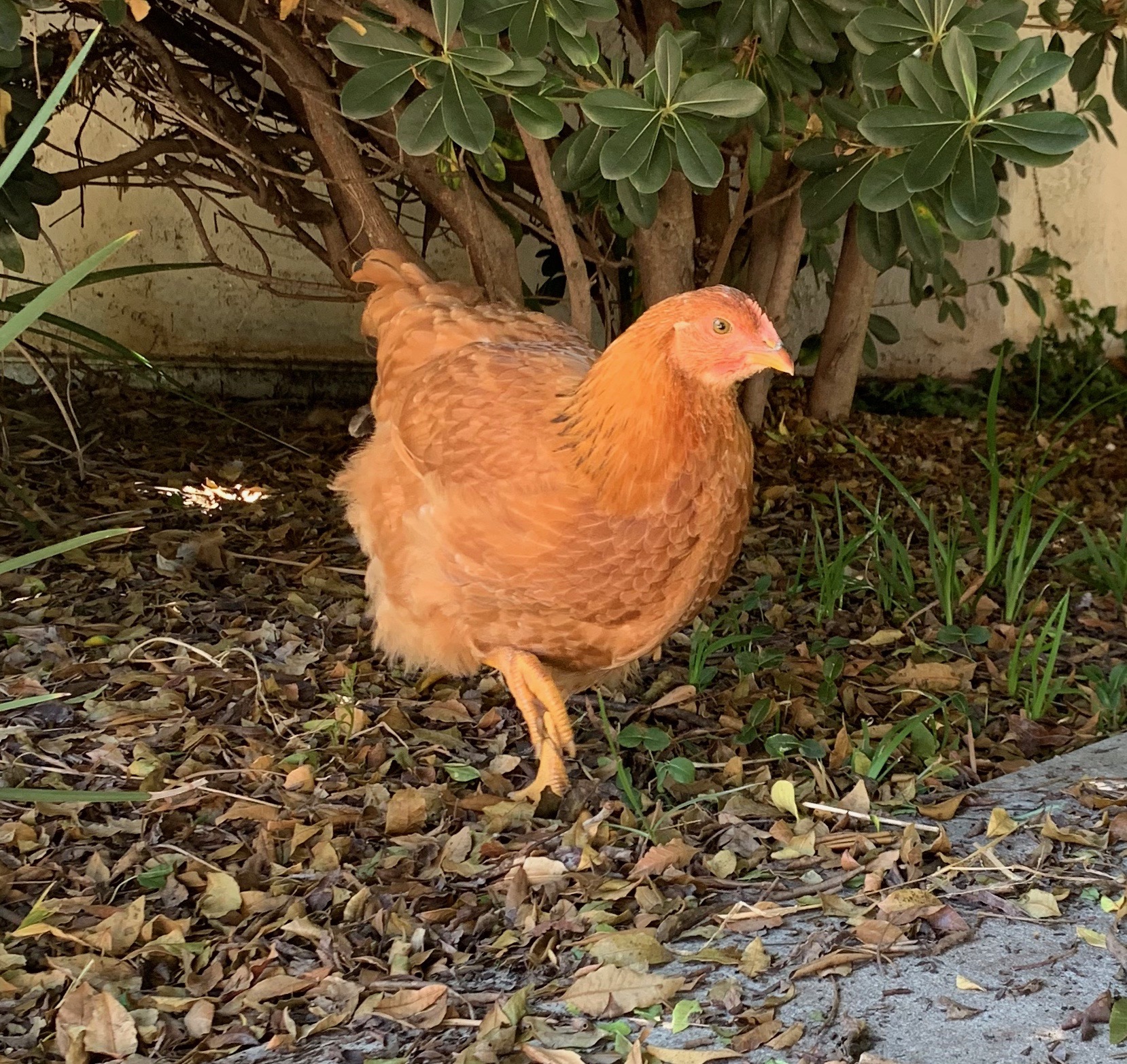 This one too, I'm pretty sure is female but no idea what breed she is 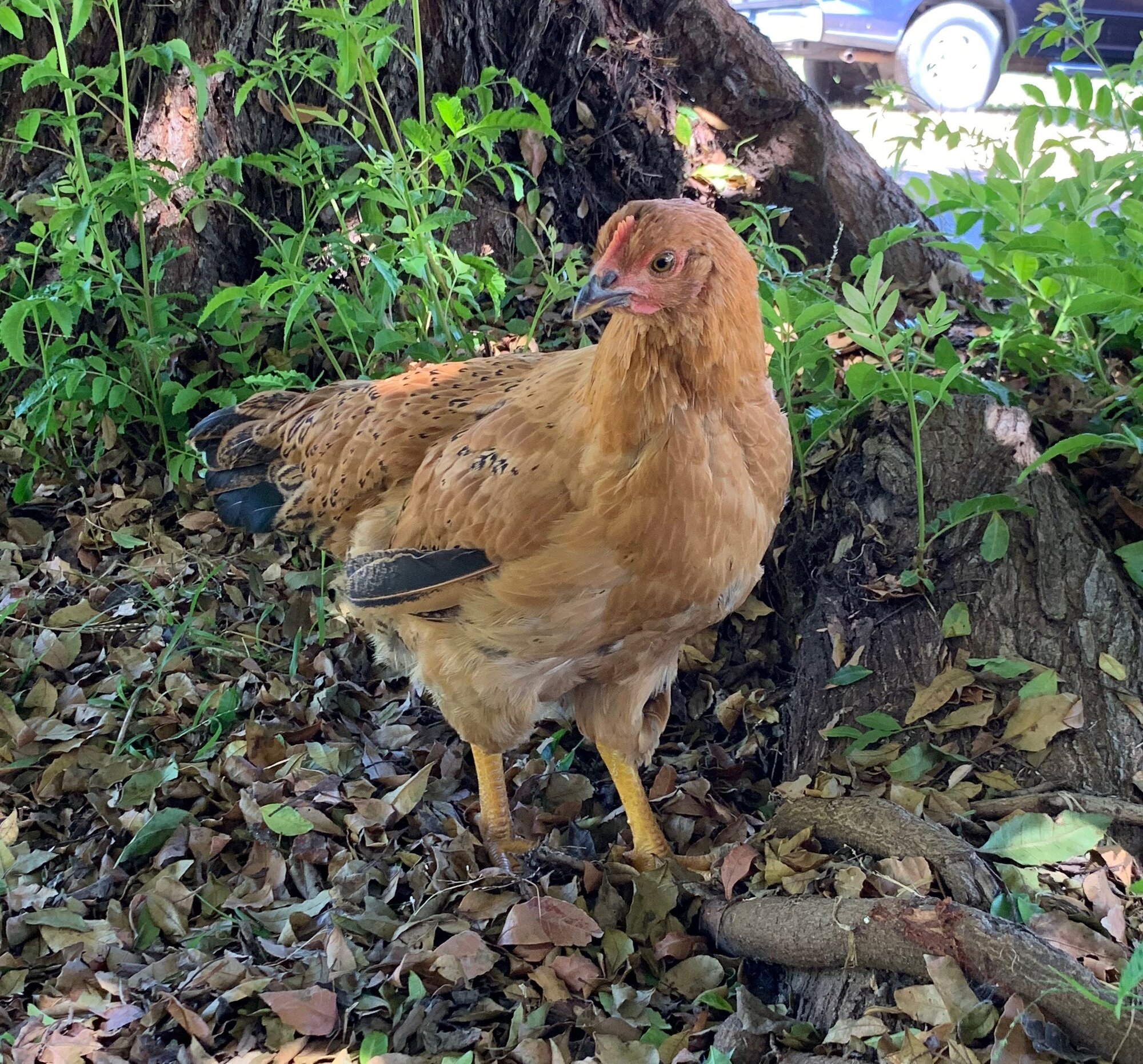 This one I think is a pullet but sometimes I wonder...... 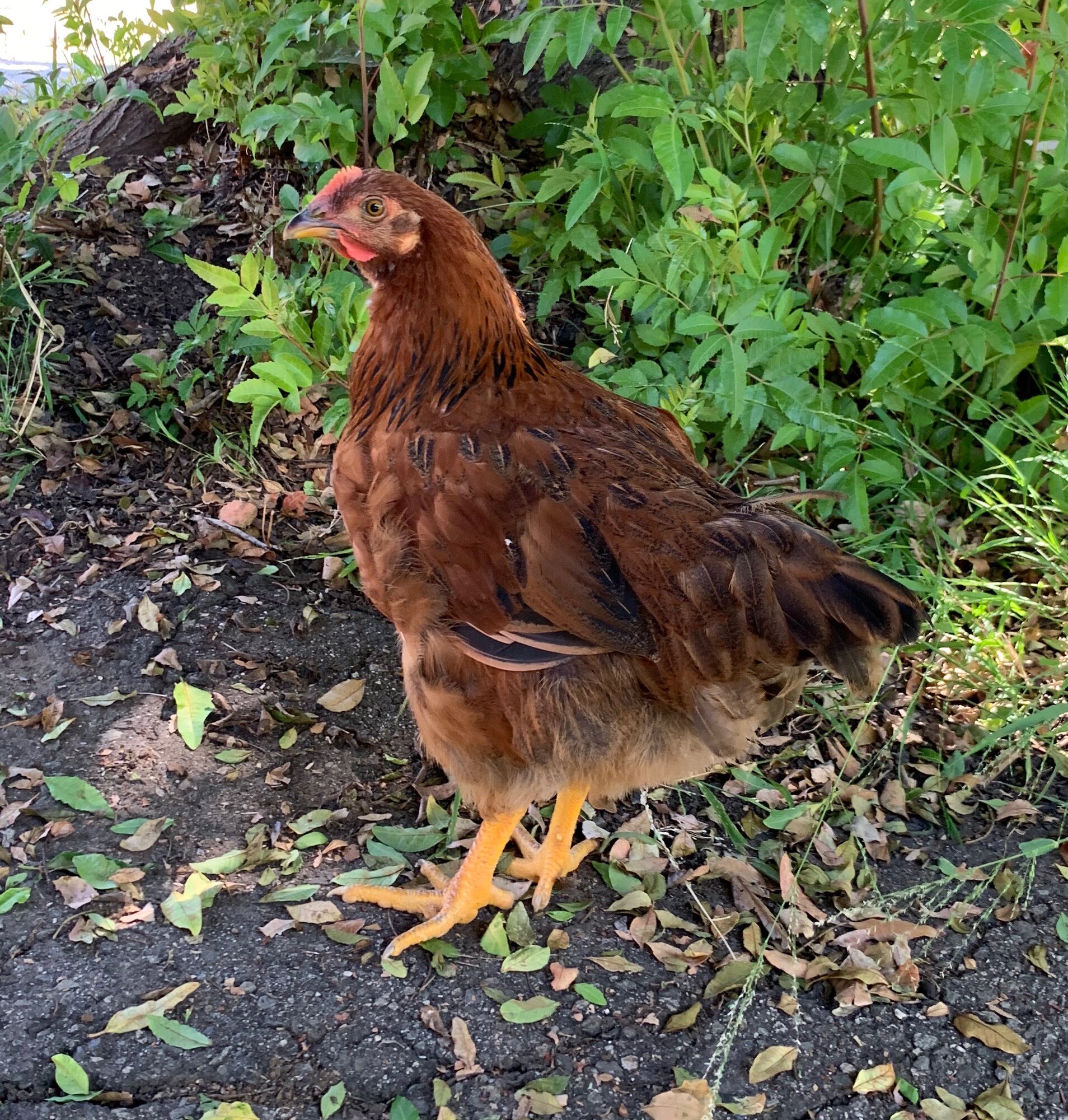 The "wild card" chicken! I've gone back and forth on wether its a cockerel or a pullet. I was pretty sure it was another boy, but comparing it to the other 2 roos now, maybe not? 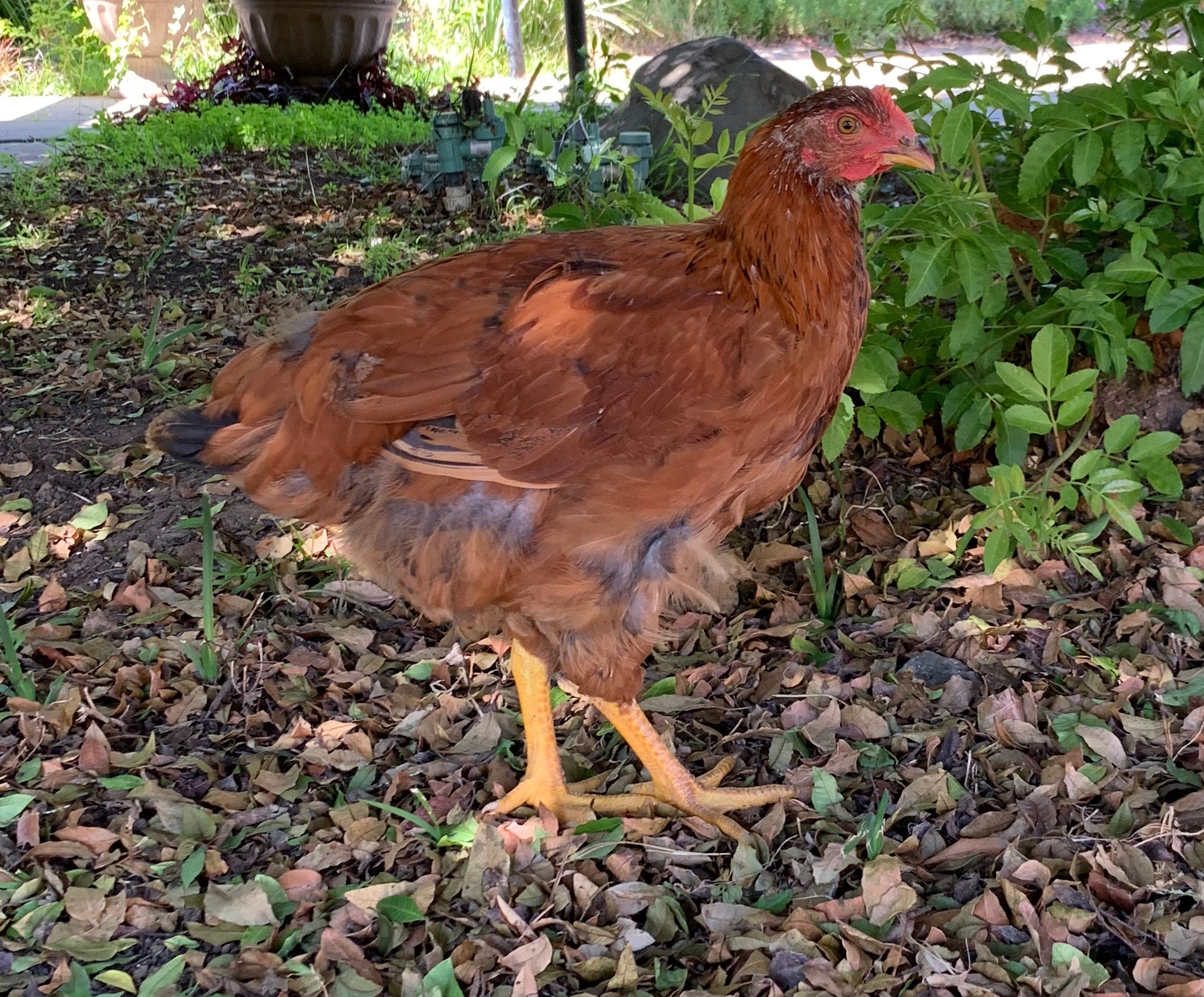 They look older than 10 weeks. I think they are mostly mixed. The second and maybe the third pictures show pullets, the rest are males I believe.

oldhenlikesdogs said:
They look older than 10 weeks. I think they are mostly mixed. The second and maybe the third pictures show pullets, the rest are males I believe.
Click to expand...

Almost 9 weeks ago, on April 9, they were probably less than 2 weeks old. Photos here:
https://www.backyardchickens.com/th...new-hampshire-reds-but-i-have-doubts.1359444/

So they might be 11 weeks, but not much older than that.

They grow up so fast!

I don't know what to say about breed--some do look rather like New Hampshires, except that they have more black than New Hampshires are supposed to have. The one in the third photo is beautiful, but has me puzzled.

Thanks for the input! Yeah they're probably closer to 11wks, it's hard to keep track of time haha. I think they look like mixed breeds too, maybe New Hampshires mixed with something else? Except for #3.

I'm gonna be pissed if 4 of them are roos! We bought them as sexed pullets with a "90% accuracy" and I'd understand if 1 or 2 were roos, but 4 out of 6?! Makes me think they were a straight run selling as sexed pullets. Never buying from that feed store again, that's for sure!

mintdeer said:
I'm gonna be pissed if 4 of them are roos! We bought them as sexed pullets with a "90% accuracy" and I'd understand if 1 or 2 were roos, but 4 out of 6?! Makes me think they were a straight run selling as sexed pullets. Never buying from that feed store again, that's for sure!
Click to expand...

Unfortunately, I'm seeing a lot of posts with that kind of complaint; I think a lot of feed stores are a bit careless with chick labels.

I think ordering directly from a hatchery has a higher chance of getting what you pay for.

It's odd, when I was younger we always got our chicks from a feed store (a different one than this) and never had this problem. I recently got another batch of chicks from a local "hatchery" that's just some guy's farm lol but he'll replace any roos so I'm not as worried about the outcome.

Unfortunately there's been a shipping ban on birds into Southern California due to VND the last few years so I haven't been able to order from a hatchery. Luckily it was just recently lifted so I think I'll try ordering from a hatchery for my next batch!

Just thought I'd post an update here! The two in the first picture ended up being roosters like I thought, but the rest are all pullets! We were going to keep both roosters, but one was very aggressive so we gave him away and kept the other.

Thank you for the update.