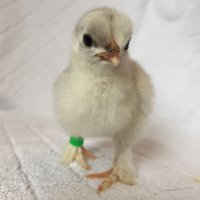 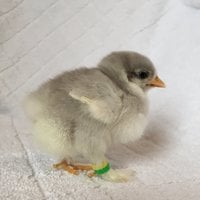 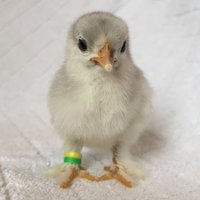 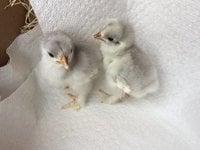 Hi all, two of the chicks we recently got in our “bantam feathered feet” assortment from Cackle are a pretty light gray/blue color. They have longer necks than the bantam Cochin we got, and longer wing tips too. But their body shape is not like the Mille Fleur D’uccles we have (one gray one has a longer neck and stands more upright it seems...). Ideas?

Hmmm - not sure I did the photos correctly. The attached file is the same chick as the top picture: Chick 1, who has two green leg bands. Chick 2 has a green and a yellow leg band.

Chick 1 stands very upright and has a long neck. Chick 1’s wing feathers are also sticking out/away from the body a bit more. Chick 2 is more squatty/round. But their faces and coloring are the same. Same breed?? Or maybe chick 1 is a cockerel and chick 2 a pullet?

Yay! More Cochins! I have one little black Cochin chick and had been hoping for more. Thanks! What color Cochin would you say these are? I’m confused on the difference between blue and splash (the two colors I’ve been looking at in pictures)...
Thanks!

Thanks Crazy for Chickens! Im so excited to see how all the chicks' colors develop as they grow. They are just all So. Freaking. Adorable.

Just a guess, but the one with green band (longer neck) looks either self blue D’uccle, or maybe porcelain. The shorter rounder chick looks splash Cochin.