come see the newest member of our family. 1 pic

We just got a new puppy. His name is Sheldon and he's six months old. My hubby has been wanting one for a looooong time. and since they are normally so dang expensive we never got one. My hubby wasn't terribly interested in papers and all that. he wanted a certain color at first but with that color being one of the more expensive ones.. he *settled* for a brindle one. We got him fairly cheap, only a few hundred dollars... way less than normal..(even from this breeder) he's not house broke and he is older. so that is why he was so much less than normal. We are happy with him and love him. we are working on crate training, not jumping on our littlest DD and house breaking. he hates the crate(bark bark bark bark bark bark bark.) unless he got to run run run run run run before being put away lol. he's a lot of fun. but very tiring.

I'm just glad hubby got what he wanted

i have my two and now he's got his. he only wanted this.. and well, a boxer. but right now.. we just don't have the room haha. 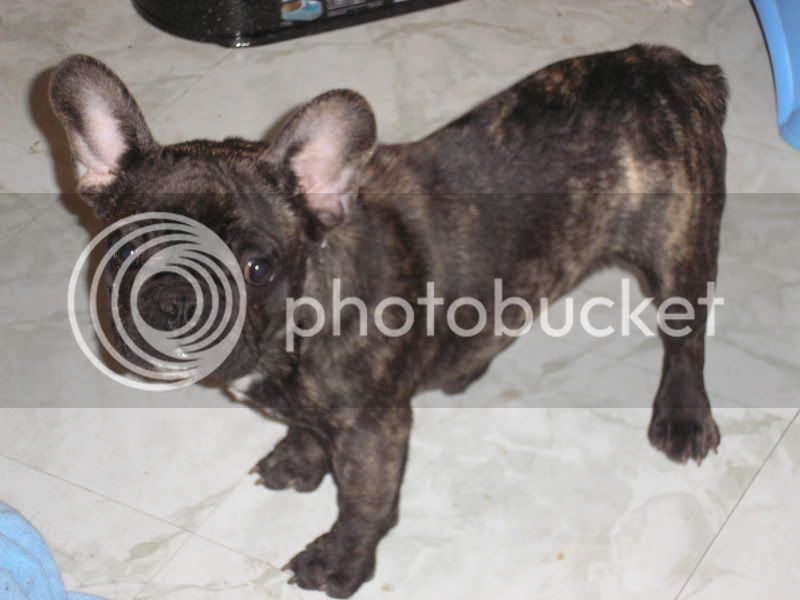 Adorable! What is he?

Quote:
It is a French Bulldogs aka Frenchies. He is an adorable dog.

Wow, cute dog!! How big is he and how big they get?

frenchies are adorable, i was at a dog show the other day and someone had 13 of them, i want one!