I decided to build a coop for our very cold winters here in Montana.

I've never had chickens at very low temps so I pick a couple of hardy breeds - Astrolorpes (2) and Aracaunas (2). They have short combs and I feel that's important in temps that are going to be below 0F.

The coop is basically 10mm (3/8") OSB and the walls, floor and roof are three-ply, the voids are filled with recycled shopping bags to trap air for insulation. I would guess the R-factor isn't very high - maybe a 15 or 20 or so, but with supplemental heat and a heated water bowl, things should be OK I feel.

I SoCal, we lived at 6,000 feet altitude and had a lot of snow although below zero temps were rare, so I went a little further with the coop as far as heat and retention, this time.

The coop stands at least 4 feet off the ground over a secondary area where the chickens can spend their day under shelter - (that's where the food and water are anyway) with screen on one outside wall, the other two outside walls are solid wood and the fourth wall opens to the run.

This blocks the wind and yet they can get some sunshine even in the darkest days of winter. We will close off the open screen too when snow happens.

I built a run - I call it a 'playground' for the chickens and since there are only four of them, I figured that a 10 foot by 4 foot run was big enough. With the under-coop zone, the playground is actually 14' x 4'.

The whole idea was that we'd move the coop, then the playground every few days so the chickens can have fresh grass to eat and a new place to explore and eat whatever insect lifestyles they find. I tow it around with my Suzuki Quad-Runner in Low range - and it goes just fine.

I think we won't move them at all when the snow falls. We can keep the playground empty of snow by closing in the run screened area. I've already cut some 1/2" OSB and sealed it with a non-poisonous sealer against the snow and wetness.

So far, everything's going good - we had chickens before, like I said and were very successful with them and not one 'strange' death among them.

Right now, we get four eggs a day - two greenish-blue and two are brown. At first we only had two no-shell eggs and that was from one of the Astrolorpes. We are watching here - she had a little trouble getting into the egg-laying groove.

I can imagine the time they laid their first eggs, they thought "Boy! I'm glad that's over and it'll never happen again"!!! I can't imagine going into labor every day and delivering an egg.

One thing we did for our chickens in SoCal was to add some 4-Way horse feed to their ration in the winter. It contains a lot of molasses and sugars help them maintain body temperature. They eat it like candy - which it is, I guess.

I can post some pixs and/or a video if anyone is interested, but I imagine a lot of moveable coops are posted and I may not have anything special to show. 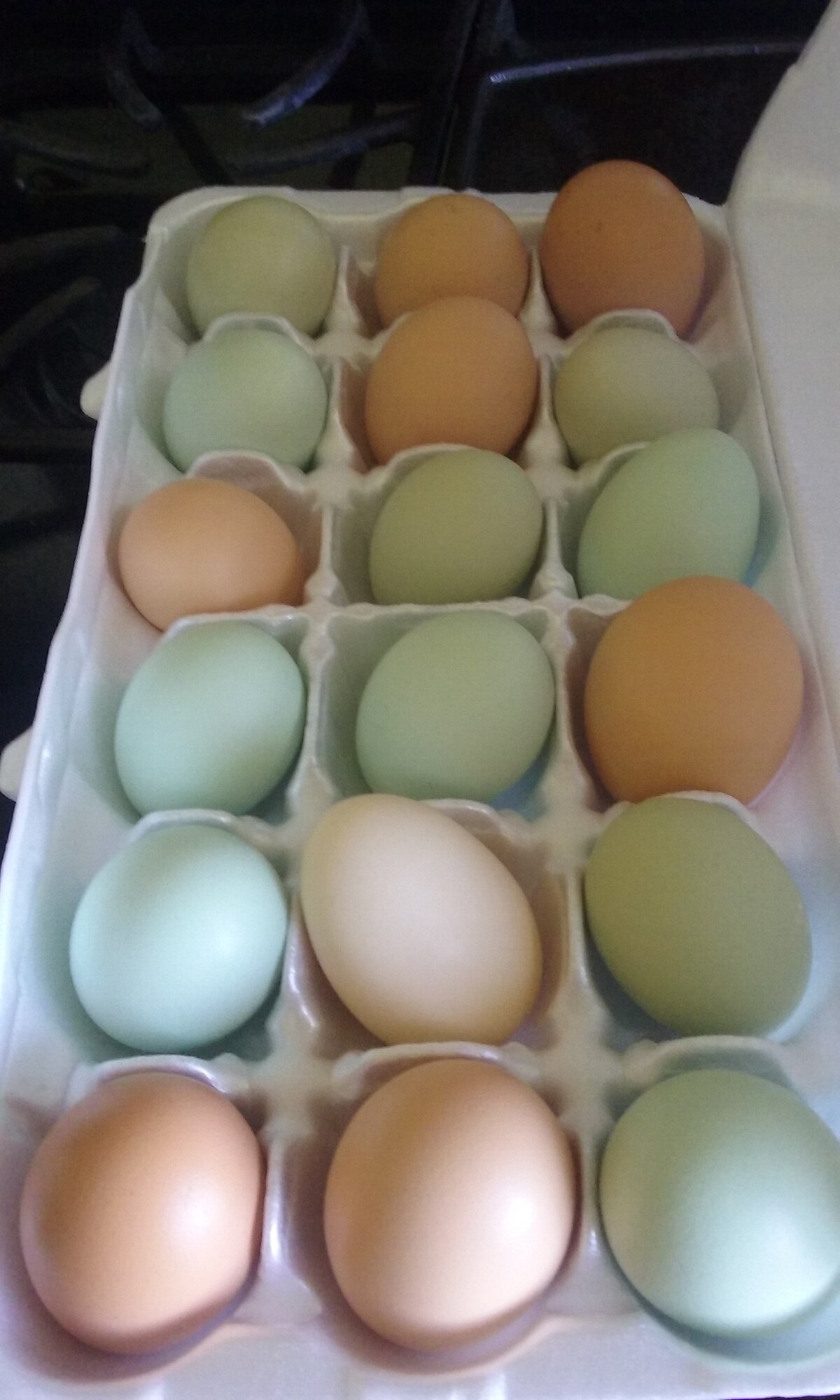 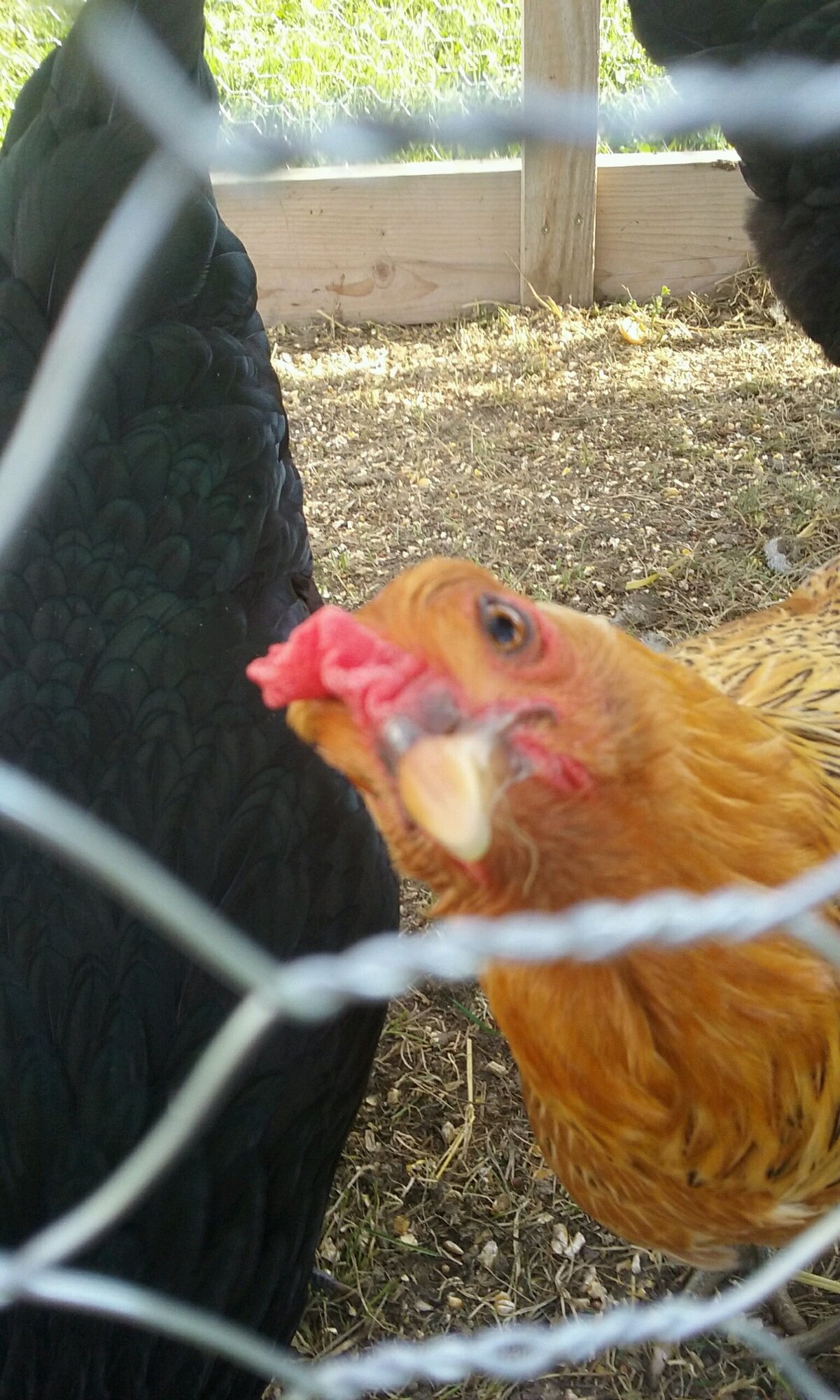 Welcome to the flock! What a lovely color palette of eggs. Go ahead and show us your mobile coop, we love to see how everyone does it. They're all a little different and folks tweek them to meet their needs. You may give someone an idea they hadn't thought of.

OK - here's a very non-professional video that includes a little of me and the back yard which was still messed up from the last winter. Winters are tough here - and I have to run tractors and other vehicles over the yard to get the firewood in and things like that.

Hello, and welcome! Glad that you joined! Nice looking egg's there! Good luck with your flock!