I'm sure there is a post on here somewhere, but I looked and couldn't really find anything. How do you keep your Cornish crosses? I'm thinking about getting some soon and don't have anything prepared for them yet, but could be able to make something soon. What do they need to have within that 8-10 weeks I have them?

Hi.. it's good to see you choose to raise your own chickens. We raise them inside our barn in a small area when they are day olds and make the area larger as they grow. We raised them for my daughter for her fair project. Just like day old chicks they need heat. So that stays the same. I'll attach some pictures. Also as they grow keep the waters and food raised up to the level of their backs. It makes them stand up to eat and drink. They will lay and eat and drink if they are allowed to. That will make them get sores on their breasts and possibly get infection. 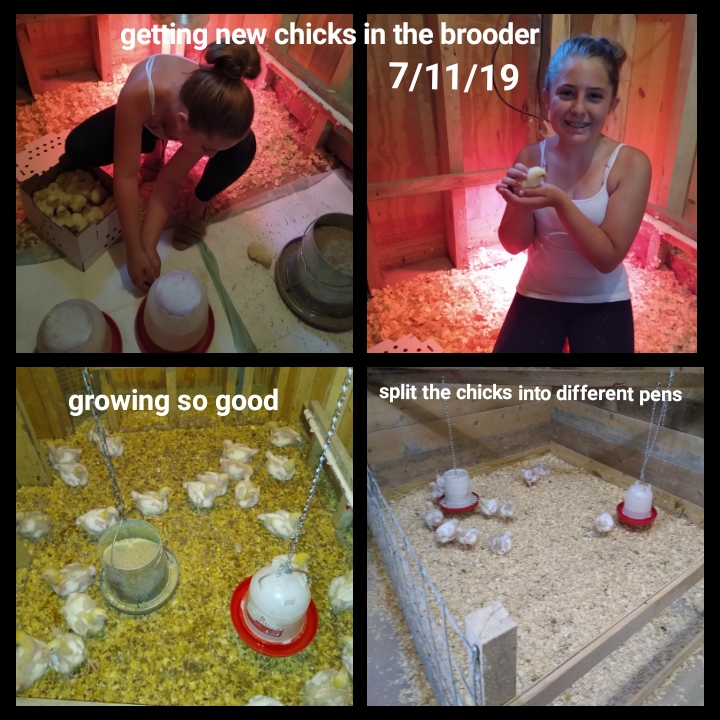 Thank you!!! Do you keep them in that same pen when they are full grown? If so, how big is it?

lereg said:
Thank you!!! Do you keep them in that same pen when they are full grown? If so, how big is it?
Click to expand...

We take half out and move them the another pen. The first year we raised meat birds we used half the pen until they outgrew it and then opened up the other half. They eat and drink constantly. Like little pigs.

I have a whole video series on raising Cornish Cross, from delivery to the freezer. If you are interested:

I've been growing out CX in an urban setting here in western wa for several years now. I think I've grown out more than 200 birds total at this point. if you want to read along through my "blog" on BYC, you can copy and paste the address in the signature part of the post (I couldn't make it a link), or do a search "Trials and Tribulations of Suburban Meat Bird Production". I've learned a thing or two that works for me, and I do things way differently than I did starting out.

these birds grow fast and poop a lot, those are the two main challenges right there.

well before a grow out, I line the runs with a mix of dirt and well composted compost, add some partially broken down wood chips. I lay this out way in advance so that it is crumbly dry, about 6" deep, basically like a version of the deep litter method.

I have completely given up on heat lamps, I'm pretty sure they are the cause of many of the issues people have with CX. I use a version of the mother heating pad. the key here is that the chicks are in the dark all night long, which forces them to take a natural break from eating, and develop more normally (no leg problems!). you'll hear plenty of folks saying that you need to feed them 12 hours on, 12 hours off or they will end up with leg problems. these birds do so much better having a normal sleep cycle rather than light 24/7, I could write a book about it.

The other major difference I do now is I use nipple waterers from day one. I take the chicks out of the box they are sent in and introduce them to the waterer, first thing, and before you know it, they are drinking from it, it's quite amazing. this approach to watering eliminates most of the nasty microbes.

Also, I raise the water and food, and increase the distance between them as they grow to force them to move. if they don't have to move, chances are they will turn into lazy blobs that can hardly move.

Within a few days I begin expanding their range. I like to give my chicks plenty of space to move around, given the opportunity, they will frolic, and it's pretty cute. of all the strains of CX, it appears that the COBB 500 is the liveliest strain, more active, less issues.

At some point over the first few weeks, they start plowing through food and in turn managing their waste can becoming challenging. that nice dry dirt mixture I started with develops a mat on top. once I see that form, I remove just the clods and huck them into the composter. the combination of chicken manure with the soil mix I started with makes far better compost than anything I can buy!

I start them out on chick starter but pretty quickly within 5-10 days move them to grower (imagine a normal chick going through all the phases that a heritage breed goes through in 6 months, over just 9 weeks, each stage being very condensed). I feed pellet grower for about the next 5-6 weeks and then move to a finish formula.

the choice of feed is really up to your tastes. I like scratch and peck organic feed as a starter, I use pellets from a company called Conway for the grower (they sell direct from the source at wholesale prices 40 cents a lb for organic is pretty good). for the finisher I use Scratch and peck organic grower. it's more pricey but makes for a nice lean and tasty bird that is super healthy.

I got a yard bird chicken plucker, which is awesome (if you try plucking them yourself you might give up eating chicken all together, lol). I do all the butchering as well. ICE is your friend during the butchering, dropping the body temp fast is the key to not toxing you and your family. from doing my own butchering, I can say that all the steps I've taken have resulted in fewer and fewer issues. I now lose hardly any birds, I don't see the inflammation and edema around the heart that I did early on and I see zero leg problems. no matter what though, the last 10 days of their life is more tedious, you have to stay on top of the manure removing and spread them out so they don't overwhelm their environment. by about week 9, they really need to be harvested or you risk losing some to premature death. (some folks really like a much more stringent feeding regime and claim you can keep them alive much longer but I've come to accept that these birds are an unusual cross the leads them to produce vastly more growth hormone than the average bird and they just have shorter life clocks, so I don't see any reason to push it.

at harvest, at about the 9 week mark, I am seeing dressed weight of between 7-10 lbs.
good luck with your venture, it can be a lot of fun and learning.

Thank you @Birdinhand. Wonderful advice. And I'm gonna check out that feed!

Vantic said:
I have a whole video series on raising Cornish Cross, from delivery to the freezer. If you are interested: