My daughter's dog would love to get in with the chickies. Here he is in his new chicken costume to fool them. 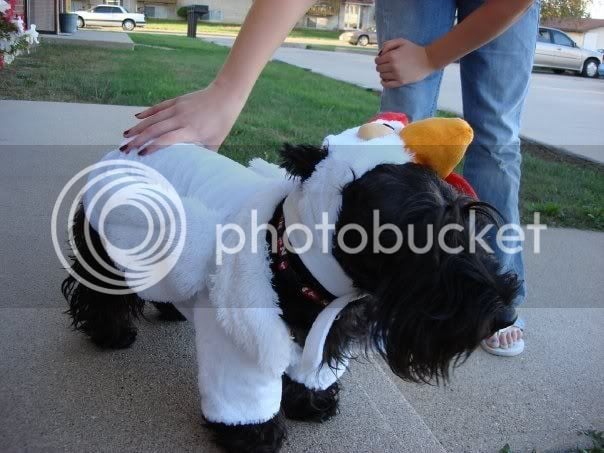 DD says it's for Halloween, but I know it's so he can sneak into the flock.

that's one of those Scottish Chickens! did you incubate that or order?

great, now i have another breed i need!

Goodness! That is absolutley the cutest thing!

Quote:
LOL Actually, he was on petfinder.org. DD is in college and was looking for a dog. I found him on petfinder at a pound near her school. She went and adopted him. The people who dumped him there even left his registration papers. DD called the breeder, and the woman was just furious. She tries to screen puppy purchasers and has them agree to return the dog to her if they are not satisfied with the dog. The bozo couple that bought him must have been too lazy to drive the 2 hours to her house, so they dumped him at the pound. DD has had Sam for over a year now.

Now that is one Scottish chicken I need to have in my coop!!!! One of those Scot Dumpy chickens!!!!!

I saw that costume at Target yesterday and ALMOST bought it, but I think my dog would kill me in my sleep if I put that on her.

What a handsome boy! He's obviously a good sport, too!

Cleaning up after my chickens is bad enough. Based on the size of that Scotts Dumpie I don't even want to think what a mess a coop full of them would create.