Hi everyone. I was curious to hear your stories/opinions/anecdotes and even statistics of anyone has them on dogs protecting their flocks. It is well known that Great Pyrenees protect livestock, including chickens. But I have a Border Collie who also seems instinctively protective of the flock. Border Collies are working dogs, but not necessarily protective dogs, as far as I know, by nature. Mine was raised as a pup around the chickens since we first got her at eight weeks old. I only let my chickens free range when both the dog and I are out there. I control the dog’sposition In the yard by throwing the ball. If one chicken is off by herself, I make sure the dog makes a couple visits over there. If I hear a hawk, I send the dog through the most visible spot on a fast run. Her presence seems to be keeping predators away so far (we have many). But I also noticed she seems protective. We had an HVAC mechanic over a couple weeks ago and when he leaned over to say hi to a chicken, she went crazy. Our neighbor has a Bullmastiff, who is a BIG, but friendly dog. He could easily kill a chicken with one move of his giant head, even if unintentionally. Thankfully he’s a bit slow. He occasionally gets into our yard and when he does, my dog ZOOMS across the yard between him and the chickens, circles around him, and puts her face right in his. Pretty cool. Anyone else?
Last edited: Apr 13, 2018

I watched my previous dog chase off a neighbor's chicken killing dog. He didn't stop biting at the butt of the strange dog until he was completely off our property. He was an Australian/Boxer mix and he was very protective of the poultry. The chickens loved him too. It wasn't uncommon to see several hens grooming him at the same time. 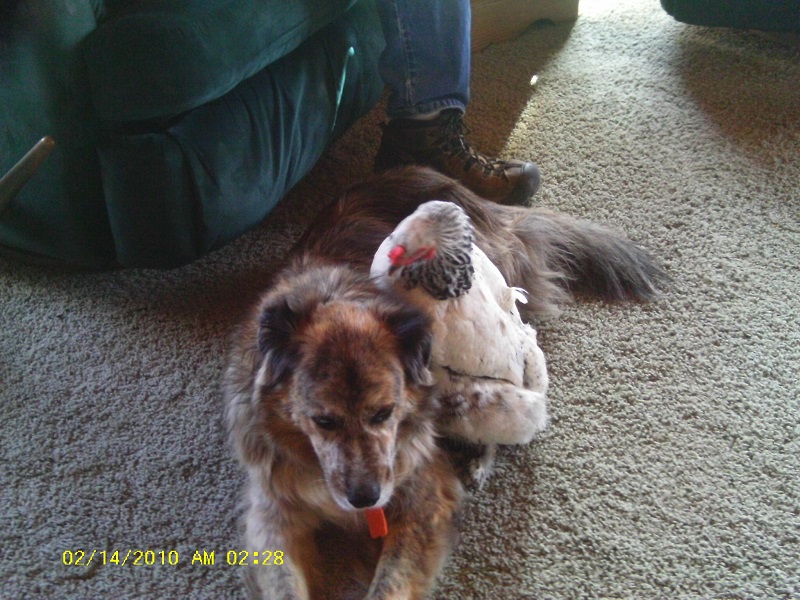 Unfortunately the small dog I have now is scared of the chickens.

But some dogs can be good protection for the flock.

We started yesterday. I have 3 GSDs but only worked with two and really the female is good to go. The younger male got the leave it and would watch them. They were not bothered by the dogs and didn't move away either 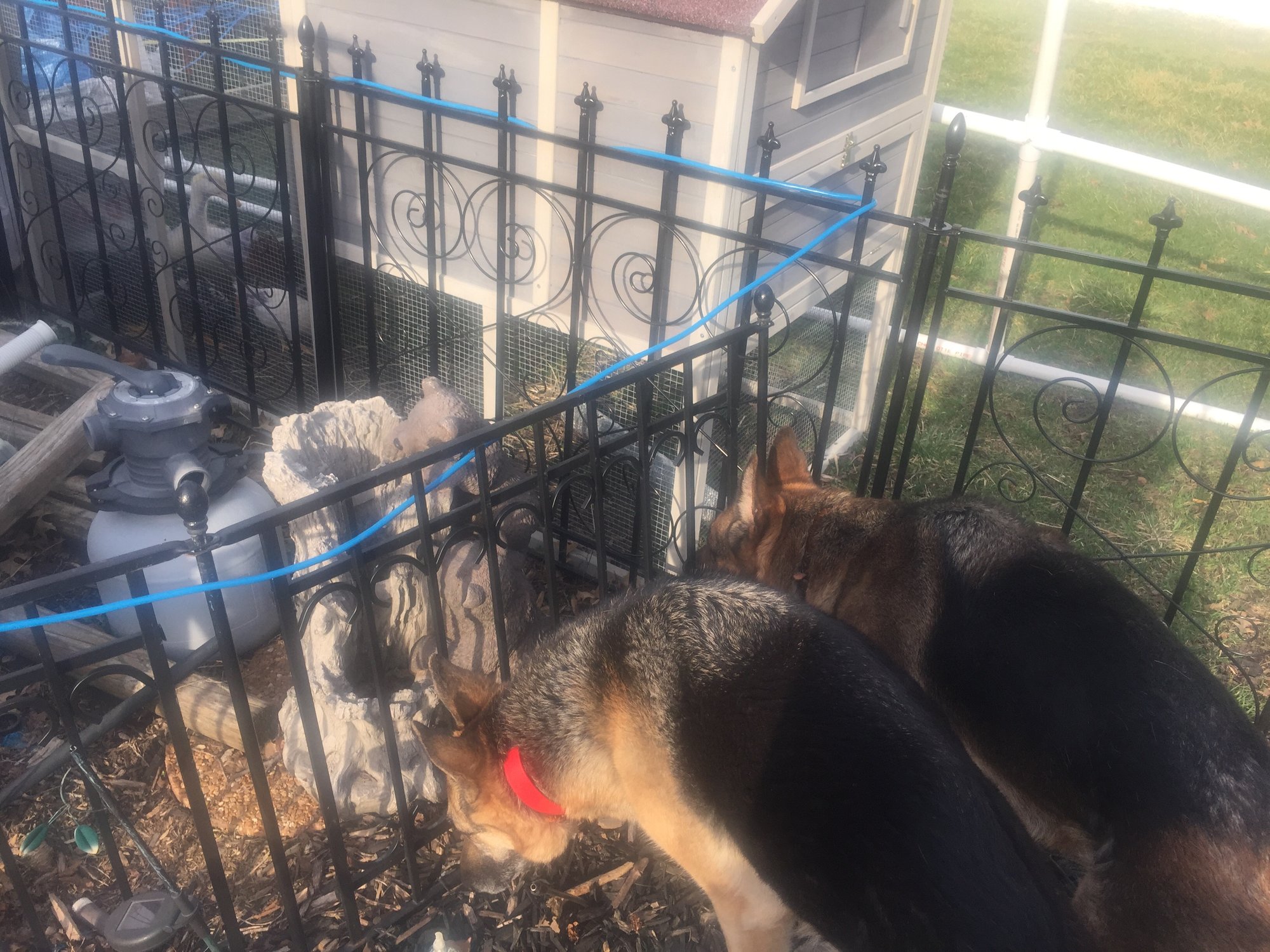 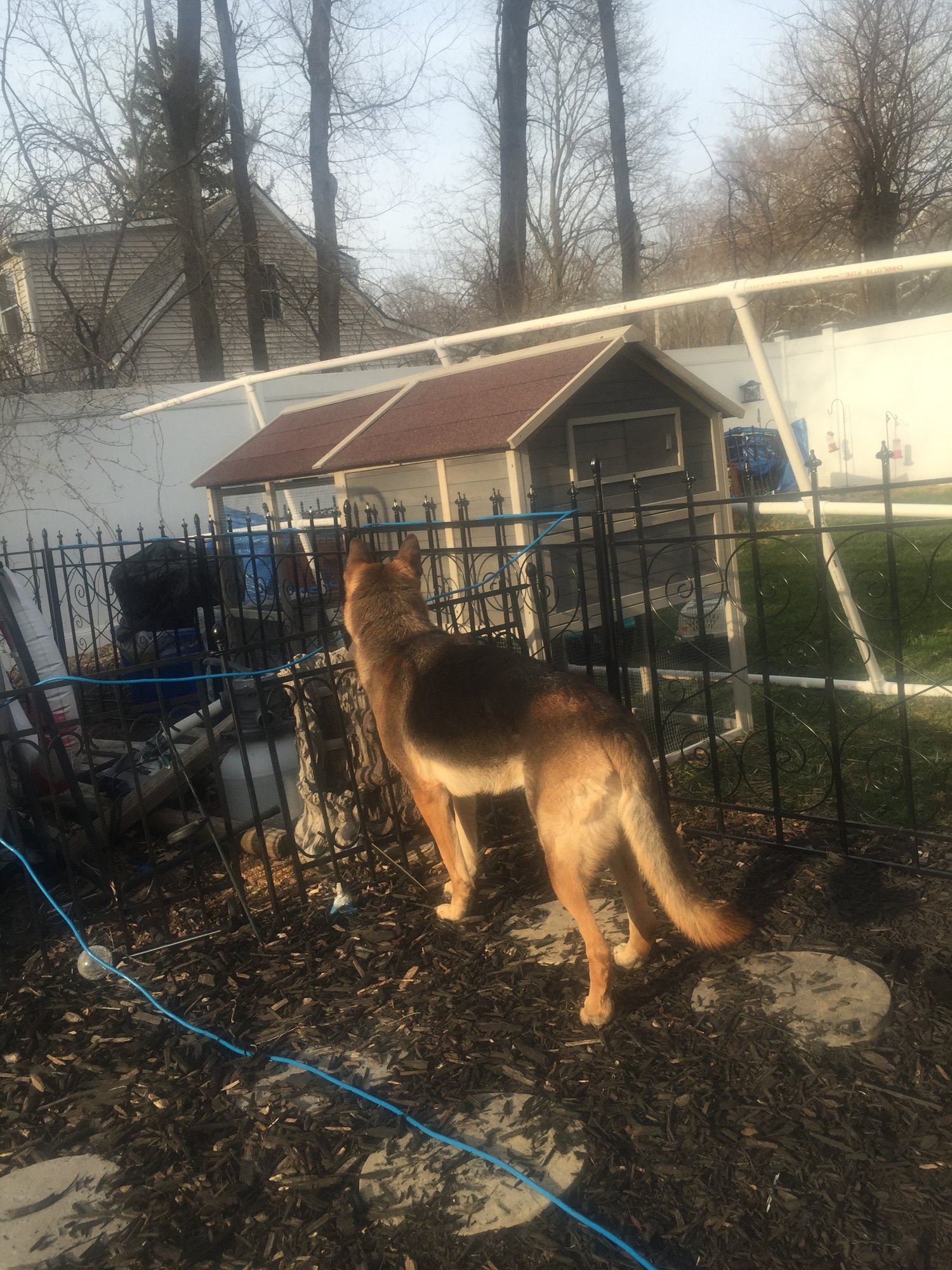 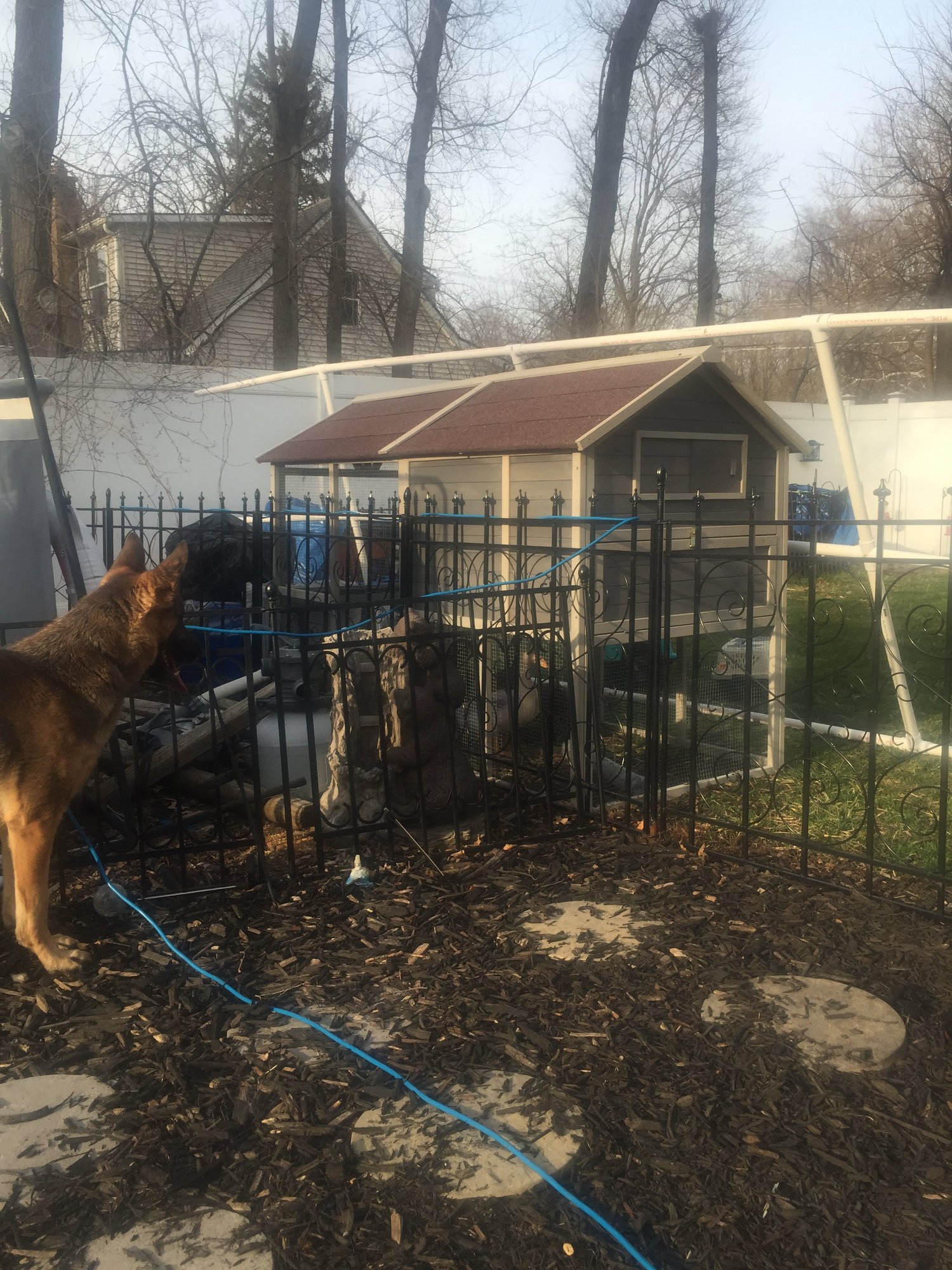 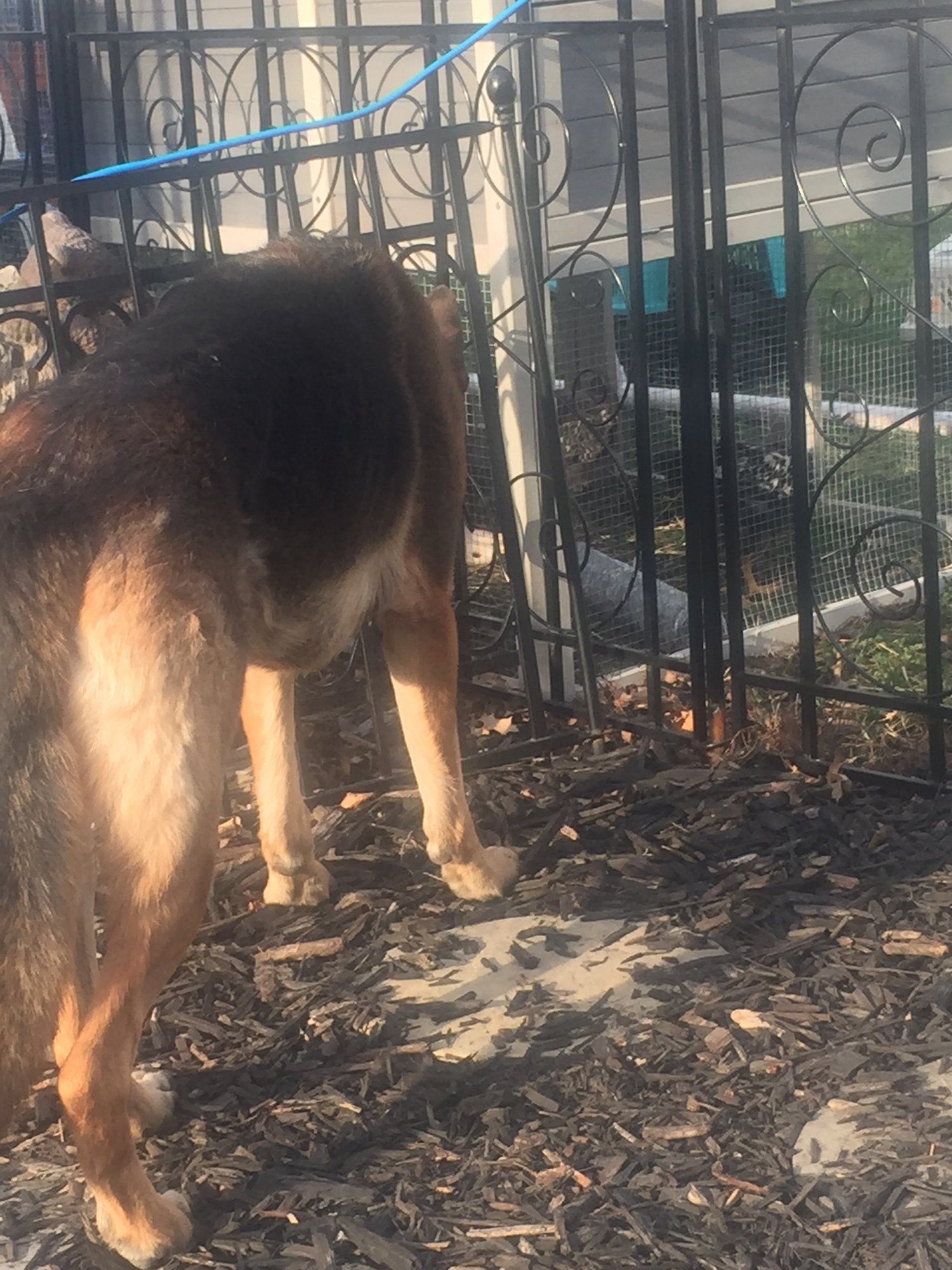 How cool is that! Loved the dogs!

No fabulous stories here, but.... my Border Collie, Lexi, loves loves loves her flock. She runs out to their gate and stands there excitedly smiling until I let the girls out.
One time an HVAC guy was over while the hens were out. Lexi does not like strangers at our house, but had calmed down and had stopped barking. That is, until the guy sort of leaned over to talk to a chicken. Lexi went ape. It was hilariously cute.

I just got woke up from a deep sleep to multiple animals arguing. My guess is raccoons. I have never flew outside so fast. The trees are so thick that I can't see but I know they are there because I have a german shepherd sitting along the fence staring at the tree. Every now and then he comes to get me and runs back to his spot, he will remain out there the rest of tonite. 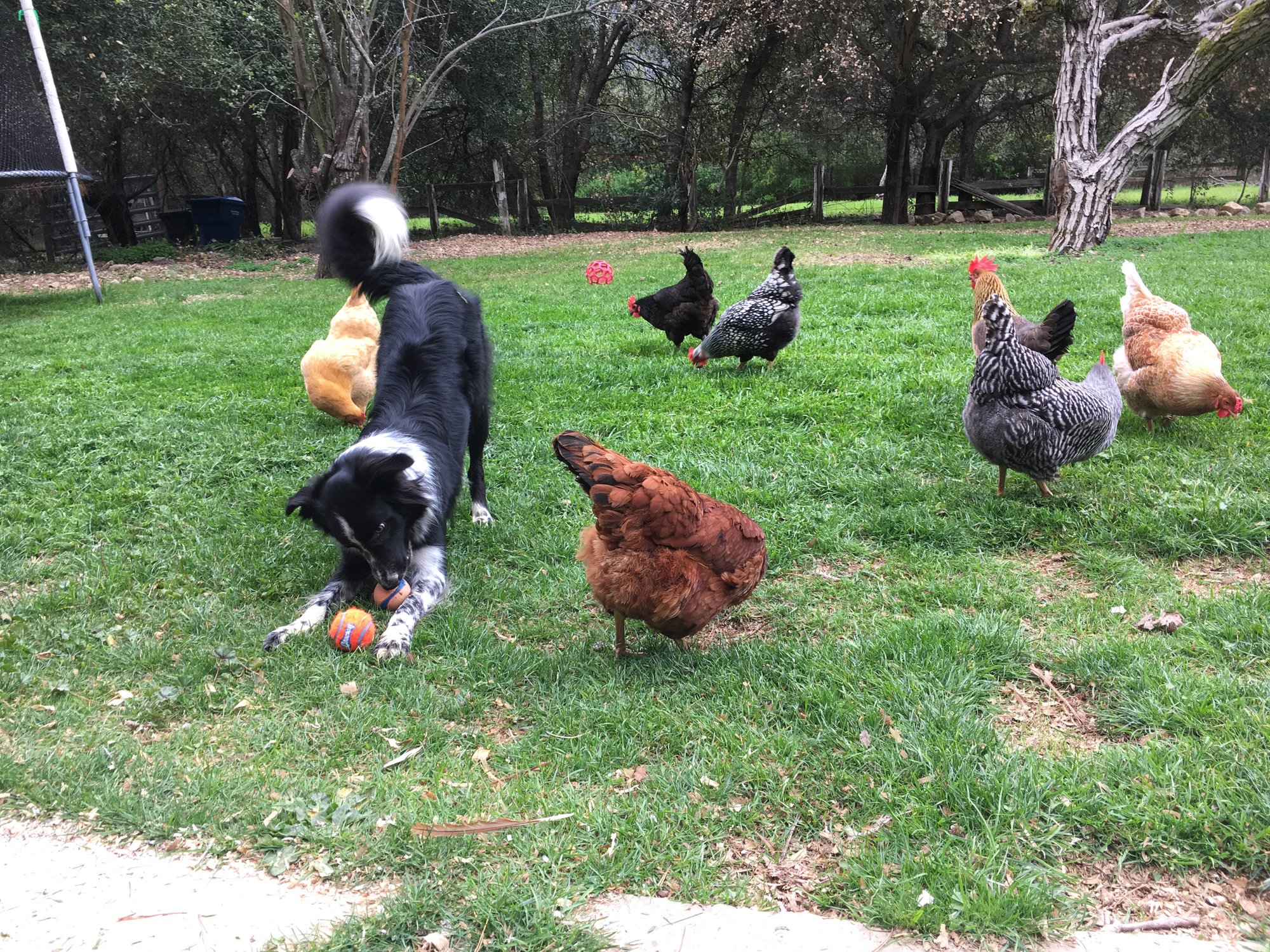 Standing with free-range flock of front yard. Had three flocks at same time they stayed on about 3 acres. Childcare duty. Scoob liked this but would rush out to chickens in a flash. Worked great when pens all within 100 feet of house.

Chickens living totally free-range with roost on front porch. Scoob made that possible.

I have done a lot of experiments over the years, even as an adult. The dogs liked to participate. Butt check as I checked for wing feather replacement pattern.

Raccoon taken in live-trap. A later catch Scoob destroyed a trap getting at raccoon inside. He killed most raccoons by simply by catching them in open field.

First fox Scoob caught and actually killed. Had bad mange. He caught another in good health roughly one year later. He learned to be quite and sneak up on fox as it hunted. If he could get it in his jaws fox would be done for. Lucy is now the old salt, but here she is a junior member keeping watch. Son and rooster on front porch still alive owing to efforts of dogs. My family has always had a lot of dogs, hunting breeds mostly, that were protecting our chickens without us really thinking about it. We did a lot of hunting for furbearers such as Raccoons and Red Fox. The fox were taken more for entertainment from my perspective but keeping their numbers down did protect chickens. Opossums, mink and weasels were seldom a problem either because our free-range dogs dispatched those that came near home or barnyard.
Last edited: Aug 4, 2018

I had to run to the store last night pretty close to dusk. The store was closing. I left the chickens in the run, turned on the electric fence and told my girl to watch the chickens. 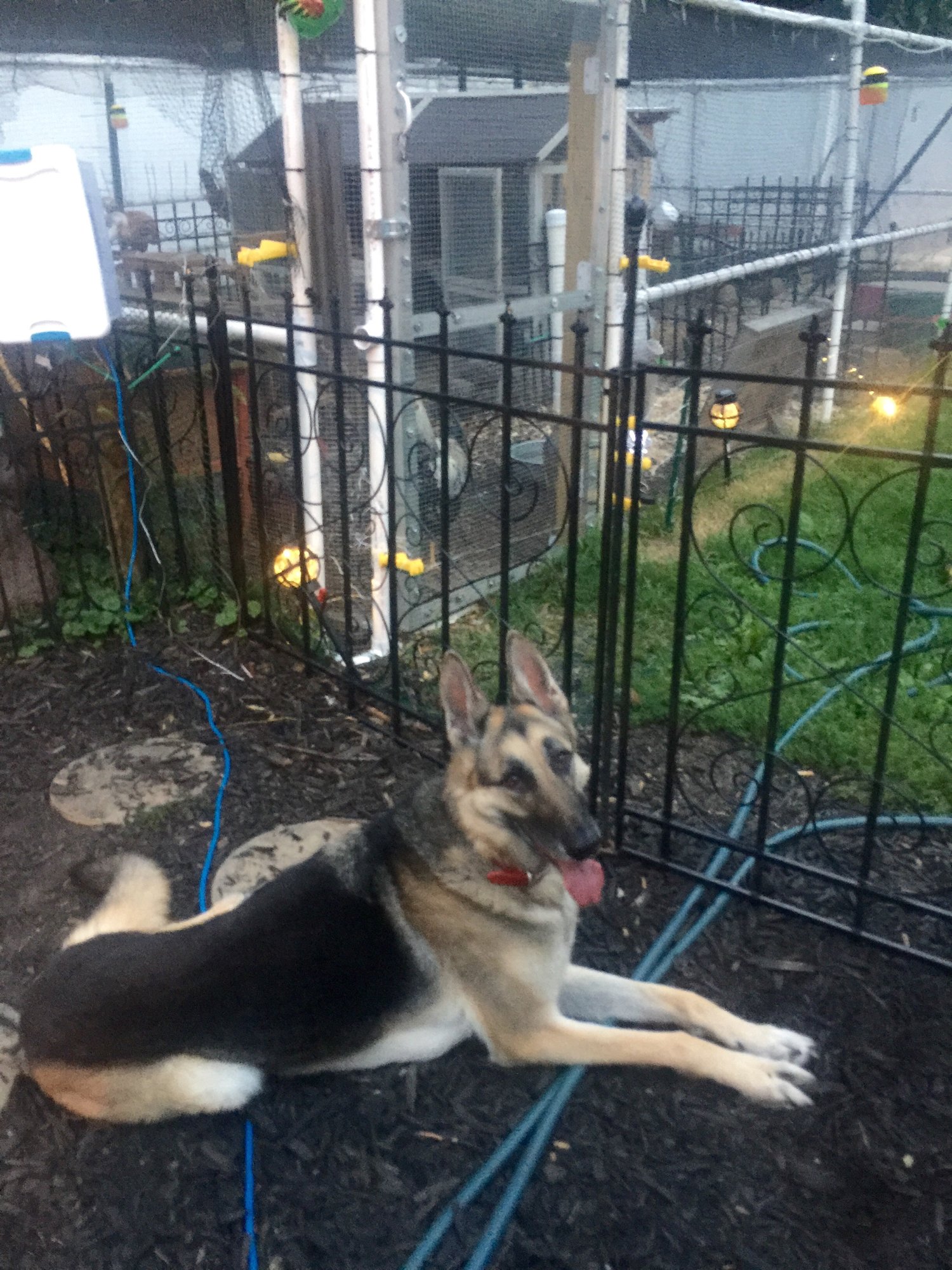