They are eight weeks and no crowing.
update: first three above these four are (in front) IMO cock
last one of these four is IMO pullet
BUT YOU TELL ME?
Thanks for responding to first part of this, finally found camera cord...getting more tomarrow too
Update: You can see the body very well in these, the comb color is pinkish, not red but thicker than the other.
Last edited: Jun 28, 2009

It's that last one that makes me feel it is a rooster. I have 11 week old EE's and none of mine has a comb that red or that large!

last one is actually smaller than the first.
the first is the one i meant to say that is the friendliest.
the last is the one that seems to not like being held/hates camera/its comb is different than the first, thinner, not fat, its not really red red...well, heck, i have no clue then.
actually i should say that at first the first pic one used to be the top dog but now the little one (last pic) is jumping on the first and trying to be more dominant, even though smaller.

Whoops.. I can't see much in the smaller pictures and I thought that it was the same chicken. I see now that they are different. Sorry. I do stand by my answer that the last one is a roo.

and yes they are on my couch, notice the tolete paper, actually they only landed one. how in the heck do people make their pictures bigger?

Need a tail shot of the bottom chicken.

I'm gonna guess pullet up top but I'm really not sure about the bottom.

HELP ME, HELP ME........everyone here keeps asking and I keep telling, IDK. PLUS rooster can't stay, boo-hoo. Darn it- supposed to be all pullets!

I'm seeing all girls at this point...although it's hard to tell with the small pics.

Looks like all girls to me at this point!!

Just to ease your mind, here's a pic of my roo at 12 weeks. Look at the tail, you can already clearly see those curly top tail feathers coming in. 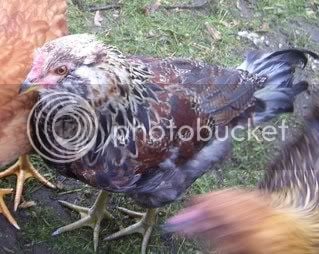