Election day jokes! No politics and no sides to pick just stuff to make us laugh

This isn't for politics or for picking sides but just something to give us all a reason to laugh today. They do say laughter is the best medicine so I thought I would provide the first doses today. Just keep smiling through the madness today and remember today the political adds will cease and the holiday shopping ones have not yet started. I heard it through the grapevine we might get a WHOLE week off.

Some one liners I liked

" To err is human. To blame someone else is politics."

The Supreme Court ruled there cannot be a Nativity scene in Washington, D.C. this Christmas. This isn't for any religious or constitutional reason, they simply have not been able to find three wise men and a virgin in the nation's capitol. There was no problem however finding enough asses to fill the stable.

Ok I could not find anything else about politics that I thought was funny, cynical yes but not funny so I will go to chicken jokes now.


[FONT=times new roman,helvetica]Q: What happened to the chicken whose feathers were all pointing the wrong way?
A: She was tickled to death![/FONT] 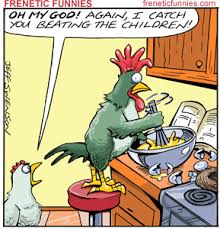 An election is coming. Universal peace is declared, and the foxes have a sincere interest in prolonging the lives of the poultry.
~George Eliot, Felix Holt,


How come we choose from just two people to run for president and 50 for Miss America? ~Author Unknown


Politics is the gentle art of getting votes from the poor and campaign funds from the rich, by promising to protect each from the other. ~Oscar Ameringer


We have, I fear, confused power with greatness. ~Stewart Udall


The problem with political jokes is they get elected. ~Henry Cate, VII
Last edited: Nov 6, 2012

Ah the news can lead you on ups and downs all day long but it almost never makes you laugh.

(I really like this one)
President Dubya was awakened one night by an urgent call from the Pentagon.
"Mr. President," said the four-star general, barely able to contain himself, "there's good news & bad news."
"Oh, no," muttered the President, "Well, let me have the bad news first."
"The bad news, sir, is that we've been invaded by creatures from another planet."
"Gosh, and the good news?"
"The good news, sir, is that they eat reporters and pee oil."

And last but not least

A young reporter went to a retirement home to interview an aged but legendary explorer. The reporter asked the old man to tell him the most frightening experience he had ever had.
The old explorer said, "Once I was hunting Bengal tigers in the jungles of India. I was on a narrow path and my faithful native gun bearer was behind me. Suddenly the largest tiger I have ever seen leaped onto the path in front of us. I turned to get my weapon only to find the native had fled. The tiger lept toward me with a mighty ROARRRR! I soiled myself."
The reporter said, "Under those circumstances anyone would have done the same."
The old explorer said, "No, not then -- just now when I went ''''ROARRRR!''''"

Here's a poem I wrote about the election.

Twas the Day of the Election


Twas the day of the election
of the year 2012,
to watch the candidates for presidency
as into speeches they delve.
"On, Romney!" "On, Obama!" the crowds roared with one voice,
as they waited to see
who was America's choice.
Would it be Obama, who had proved with his four-year-long reign,
that he was the cause of immeasurable pain?
Or would it be Romney, who had been so bold
as to say he could fix all the problems of old?
The people anxiously stared at the clock
as the candidates flew over each stumbling block.
And as for the candidates, how fiercely they fight
as with quips they strike out at each other this night!
O the fraud! O the spats! O the villainous cheating!
That their followers commit
while continually bleating
that their candidate's the best,
there's no hope for the rest,
and that their party is so very blessed
to have such great people
supporting the evil
of abortion, same-sex marriages, and the dreaded 1 percent!
So take a seat,
and prepare to greet
our new President at the end of
this arduous meet!
By Georgie V.

P
New and need some advise

Did I ever tell you about my cordless drill plucker?