woke up this morning to see a chick hatched and then I realized the chick had an exposed navel with a little bit of stuff coming out of it. First I tried to push it back in with Preparation H and then I sprayed it with Bactine and tried to put Triple Antibiotic ointment on top of it. I was going to use this batch of chicks for 4h showmanship so I don't want it to die. I don't know what else to do. Please help

This sounds like the yoke sack didn't absorb all the way. I would just leave it alone and it should either absorb the rest of the way of dry up and fall off. Just be careful if the little guy/girl is in with other chicks because they will peck it and that is not good. I had one to hatch out and this happened and the little guy didn't make it because they pulled the rest of the sack out. Then I was given a RIR female chick and they knew it wasn't going to make it if she stayed in with the rest of the babies. After I brought her home I examined her closely and saw that she had some dried crusty stuff on her bumm area and first I thought she had pasty butt but it wasn't it was the yoke sack that hadn't absorbed all the way. I kept it clean and it did fall off but just make sure the little baby eats and drinks and is warm.

Good luck with you little one!

Oh and we named our liitle rir Lindy and she is gorgeous little girl that is growing like a weed and happy.

update:
chick seems really lethargic and does not want to walk. Hole is not coming back together and little red piece of umbilical cord or intestine seems dry. I think the area around it is swollen I wonder what I am doing wrong. Does not want to drink ether just wants to sleep. the good news is it is very vocal when you pick it up. Is there anyone else who can reply to this post with further advice. I am getting very worried.

Gosh im sorry ur little one is sluggish. Try to give it some vitamins mixed in water. Try using an eye dropper to get some into her mouth just be careful it doesn't go into her windpipe. Just enough to wet the beak and try some yogurt. I would even try some sugar mixed in water if u don't happen to have some vitamins to put in the water. 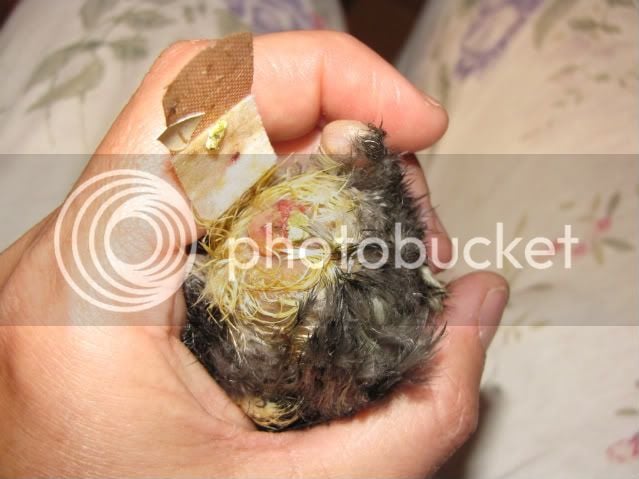 I had this happen on my first hatch ever. (since learned the temp was low) This chick tore itself trying to free itself from the egg. I pushed what I could back in and covered it with a band aid because the others were trying to pick at the injury. The band aid let it heal and kept the other chicks from bothering it. I changed the band aid several times a day, and kept the area clean. This chick healed and was fine.

Hi there, first thing you want to do is prevent infection... because if the yolk sac gets infected it can kill the chicken. I had some success saving a couple of chicks who had your exact problem this summer. I'll tell you what I did. Hopefully some of it helped them... they are both running around happily today.

I used terramycin / oxytetracycline I bought at TSC. It did a good job, and was very cheap. If there's no TSC nearby try other farm stores, feed stores or a vet. It comes in a plastic packet with instructions printed on the outside.

Medicating a baby chick is quite easy if the chick knows how to drink, IF it wants to eat and drink. Just mix up some water and powdered antibiotics according to the packet instructions, put it in a chick waterer and put it where the chick can get it.

If the chick doesn't want to drink or do anything else, it's still pretty easy to medicate (and my chicks were like this). Prepare some liquid antibiotics (terramycin, or oxytetracycline) - make it several times stronger than the label says. You only need to make up a couple of tablespoons of water, enough to put in a tiny bowl, jar or dish. You'll need just enough oxytetracycline to make the water look pale yellow - a very small amount, like you were salting french fries. Just add a little and dissolve it, if it looks too yellow tip out a little liquid and add some more water. You want to hold the chick securely and comfortably, and then dip the chick's beak in the dish of medicine for about 1 second, as if you were showing it water for the first time. Then let it lift its beak out of the water. If you did it right (and if the chick is relatively awake) it will lift its head up and "drink" down the stuff it has found in its mouth. Give it 3 or 4 of these tiny drinks, a couple times a day, for 3 or 4 days. Make up a fresh batch of medicine each morning, because the mixture gets stale after a day. Give the chick access to some plain water in case it starts to feel better and gets thirsty. I fed my chicks moist food to make things simpler for them.

You could also try giving one of these booster drinks to a chick who wants to drink, just one time, to get a bunch of antibiotic into its system before you give it the normal-strength medicine in a chick waterer.

An antibiotic should help with your chick's redness, swelling and listlessness.

Also, keep it in a clean, warm place (with clean, fresh litter) because you want to keep dirt or poop from getting onto its open navel wound and making things worse.

In a few days it should start to scab over, it will be covered with a yellowish hard crust which looks icky, but is just the first step in healing the hole. (do a sniff check to make sure the chick tummy smells ok, if there is infection you will smell a stinky smell

) If the chick has beat its infection, the crust will eventually fall off and the tummy will look ok underneath it.

If there is a huge, open hole (like as big as an M&M candy), it might be best to try some stitches as well.

For putting on the outside of the wound, the best topical antibiotic I have ever used is called "animax". You can get it at a vet; we first used it when we had a cat with an abscess. It's much more effective than the bacitracin / neomycin ointments they sell for first aid. help idk what this is and idk wats wrong almost looks like an umbilical cord something like that and it's stuck to an egg
Last edited: Mar 12, 2013 Does this chicks navel look ok?