He matured early, crows regularly, and has something to crow about. Has been kept with a single pullet his whole life and is extremely overprotective of her. Keeps her under the deck in case of hawks, herds her away from me, and comes running if she starts squawking.

He was started dropping a wing at me and got me in the ankles a couple times. A whack with a rake or a little chase seems to knock his socks off for a while. He doesn't mess around when it comes to protecting his lady (although he fails at defending against empty buckets).

As he is only 15-16 weeks old, he should be something to write home about in a few months, let alone in a YEAR when he is full grown and fully matured. He is a good looking boy who free ranges in the yard sometimes and always brings his girl back to their shed at night.

I kept him planning on integrating him with the other "flock" but he did not appreciate meeting the other cockerel through the fence the other day, even though they shared a shed at night (separated by mesh) for months. And I have much nicer cockerels that are growing up that I will keep instead.

He would be a GREAT free range rooster as he takes his job seriously. I have caught him mounting his girl already weeks ago and he really is all ROOSTER at this point.

Obviously he should not be with litle kids, but anyone who needs a good Roo to protect their flock, he is your man.

And if that does not work out, he could live up to his name (Crockpot) and I bet he would taste delicious. 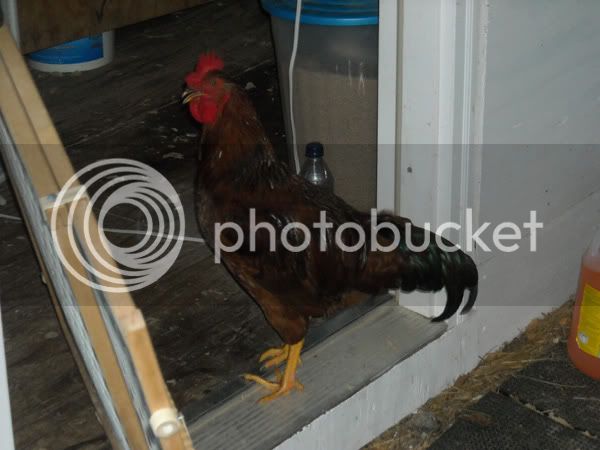 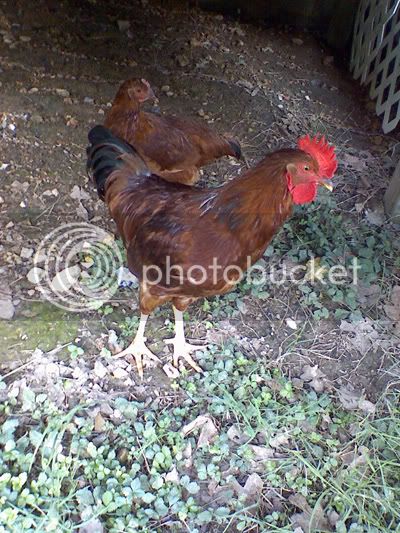 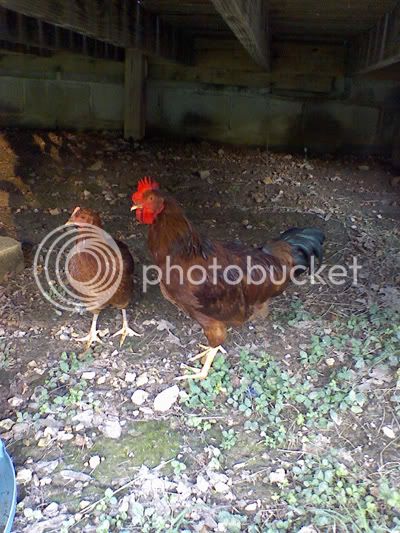 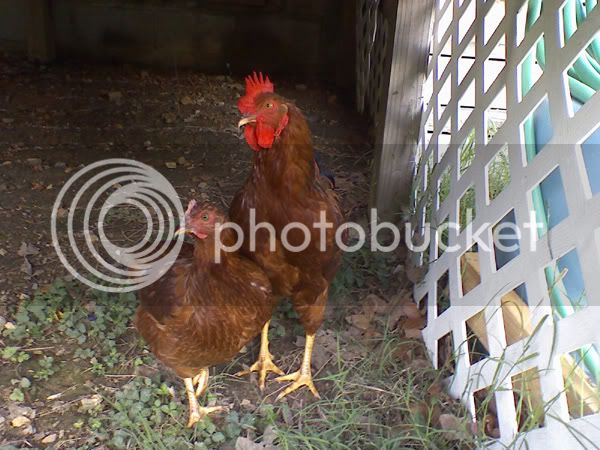 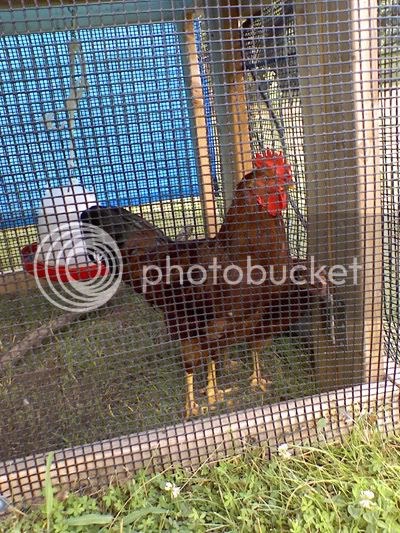 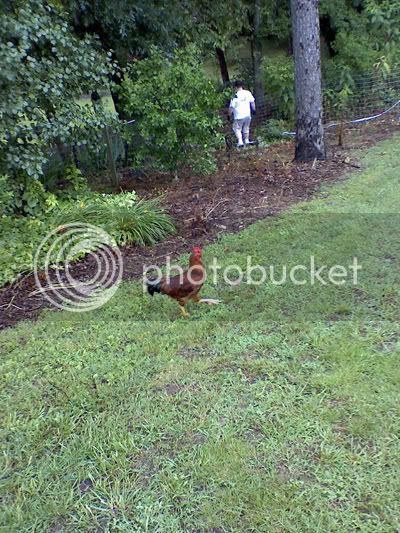 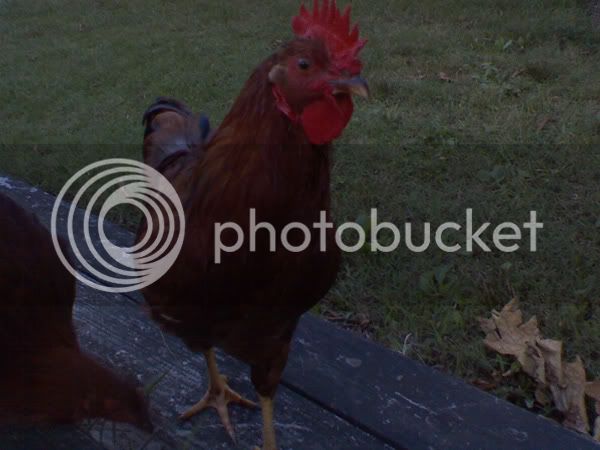 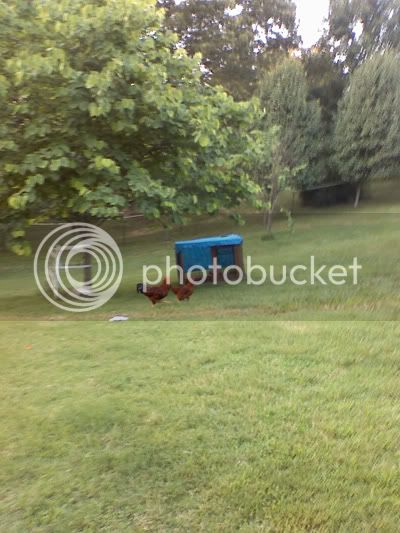 His age is correct, I bought him from a local feed store, from a local breeder (not hatchery), March 10th. He appeared to be 1 week old then. He is now 15-16 weeks old.

FREE to a good home. Would prefer a home that will try him out but am open to him becoming dinner as well.

sounds like he's just doing his best to be a good roo... I'd hope that you would consider letting him go someplace w/o other roos and take his lady friend with him since they've been together since chick-dom.

If I had room for some extras I'd be willing to buy them both so they could stay together.

I would love for him to go to a good home where he can be as cocky and protective as he wants to be. I am a first time chicken owner and first time roo owner, and he is definitely just too much for me.

I am not really interested in rehoming his lady friend....she is the sweetest chicken I have. Nothing like polar opposites with those two......but I would consider it in the right situation, although she would not be free....

Here is another picture of Crockpot. 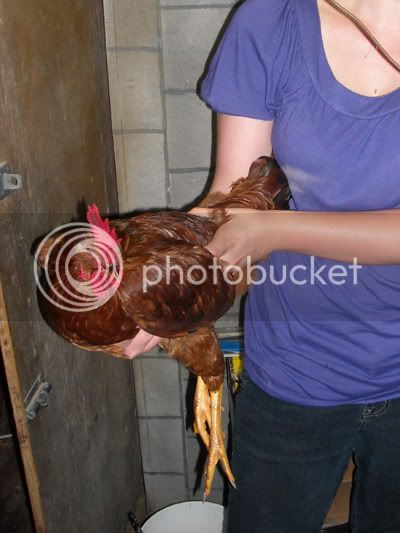 And another of him guarding his lady in their pen....sometimes he doesn't go in on the first try (I let them out of the garage in the morning, they follow me to their pen on the other side of the yard and then go in there to spend the day). He won't leave her in there by herself, he just paces around the outside of the pen until I go back to let him in. I often let them out in the 1/2 acre yard to free range a couple hours every day or two. 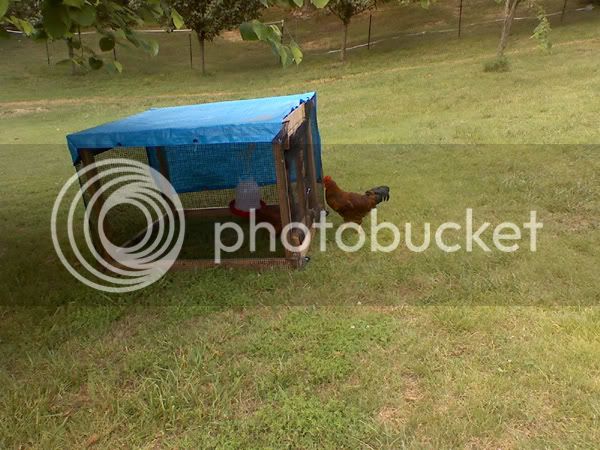 At night I let them out and they follow me back to the garage to go into their night shed. Crockpot goes straight to the shed and jumps up on the box fan, waiting for me to pick him up and put him away. They have a partitioned area behind the solid door, that keeps them separate from the "babies" in there. 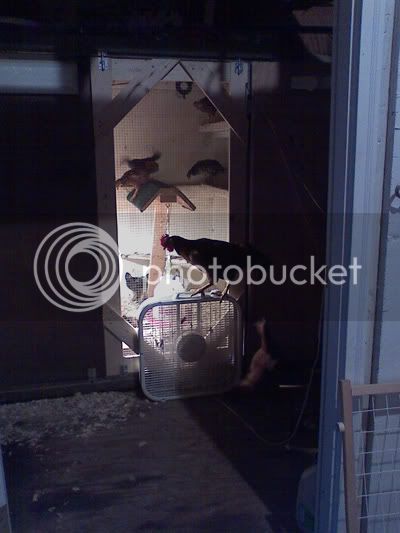 Another pic of him on the lookout for hawks while his girl pecks around. 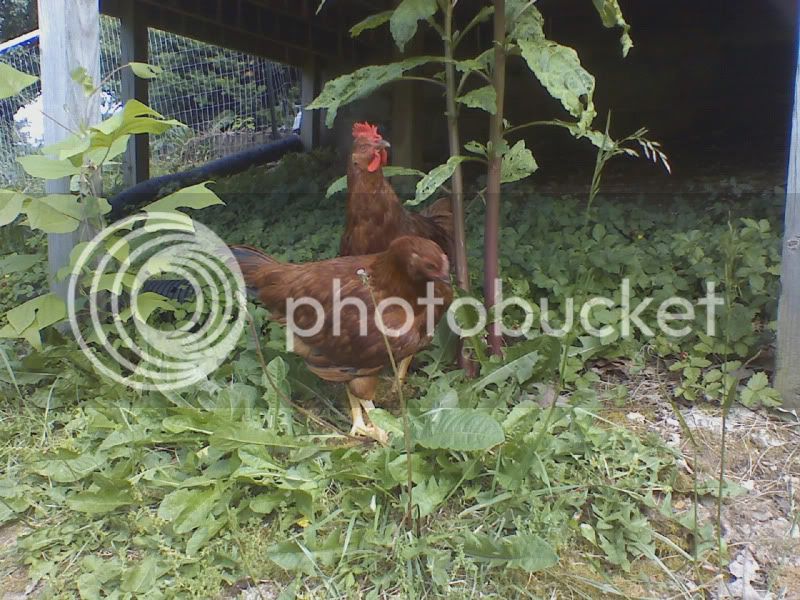 And one of him standing guard with his lady friend. 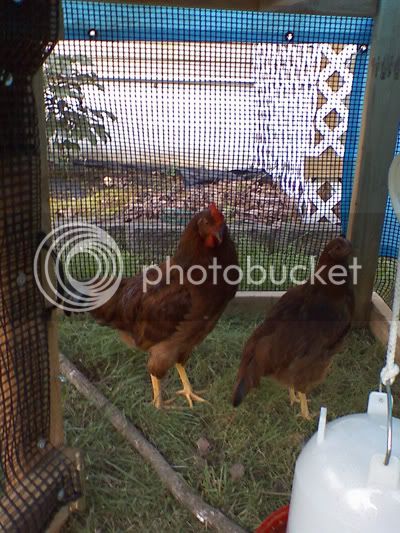 So basically, he is just a good rooster in a bad situation. I pick him up in the morning to get him out of the shed, and pick him up at night to put him away....but sometimes that is easier said than done! He might even be great in a regular coop situation where he had a pop door access and did not need to be handled, but I have only one coop and there is no way that he could be added to that "flock". And he needs more than just a single lady, I think he wears her out.

Doesn't anybody want a nice, good looking, PROTECTIVE boy for their girls? I also have a video of him crowing if you want to know what you're getting yourself into

looks like you've got a really great set up for them there.

Still looking for a new home.

Evil Rooster did not want to go in their pen today....after herding him around the yard for 10 minutes in my pajamas, I locked his girl up and left him loose. When I went to leave for work it was a torrential downpour. Although there is a large deck (10x20) that is maybe 30 feet away from the pen, he was standing in the rain, completely soaking wet and dripping, next to the pen so he would not have to leave his girl alone.

Somebody must need a Rooster that will take care of his girls like that? If she had been loose, he would have herded her under the deck and kept her there until the rain let up. He would be a great Rooster in the right home (not mine).

You have a very typical (and beautiful)RIR. They are great with the gals, but get alittle protective and pecky as they get older. I just had to get rid of one that was Identical to yours. Free to good home too. Shame I couldn't keep him but I live in a subdivision and he was starting to get pretty loud. Is it just the protective behavior that has you wanting to get rid of him? Maybe you should really consider keeping him? Get him a few more hens to build his confidence. I was told that they will mellow out with age and confidence. When they are unsure of themselves they tend to be alittle more aggressive.

Part of my problem is nowhere to keep him and a brood of girls. I have only one coop.......and two other groups of chickens! I will be having to build a new coop for the 2nd set, but they are in my large brooder (3.5x6') and will be good there for another month or two (or three or four.......) for nighttime only. That still leaves Crockpot and his lady. i have thus far kept them in a partitioned area in the brooder and their small tractor during the day, but that won't work forever and definitely does not allow for any more ladies for him. The way I have them now is temporary for lack of anywhere better............they were supposed to integrate with another "flock" the same age, but it never worked out...I'm sure I could get the girl to integrate, but Crockpot and the other roo will never tolerate each other, judging by the behavior over the last few months. I have left his girl with him for company only.....

If someone wanted to come build me another coop or figure a safe and easy way to keep him and some girls....I'll keep him

He has an attitude but I have a Rooster Rake and have been letting my big shepherd mix (on a leash) help me bring him in at night. He is not "evil" just overly protective....it may improve with more girls to spread it out over....if only I had somewhere to keep more more more.

It does sound like you have your hands full! I sympathize with you, been there done that, LOL! Good luck. Hopefully you will also find a good home for him. I ended up finding a swap meet close by and took both my roos there, just this past weekend. Both found good homes. Although getting rid of my Barred Rock was alot easier than my RIR. They do seem to have a reputation. I found out about it here on BYC. Try looking in the Swap Meet section for one in your area, or post asking about one. Or heck, HOST one! They seem to have a good turn out if you give about a months notice. The one here had people making 2 hour drives. And it was alot of fun. This was the first one I went to. I took my daughter and met alot of nice people from BYC. So we all shared the same interests. There was a table set up with snacks and drinks that everyone volunteered to bring. I also came home with a QUIET bantam OEGB roo!

Any plans to come to Ohio?

I've got lots of girls looking for a great man...

You could try putting him in with the other flock. The males will fight it out, probably on and off for a few days, then one will become more dominant and things will settle down. When they freerange, they'll keep their distance and it should work out. It's just hard to have them fighting, but once they're over it, they'll be fine. It usually works best when they are first put together outside, that way they have space to get away from eachother when necessary.
You must log in or register to reply here.
Share:
Reddit Pinterest Tumblr WhatsApp Email Link