Hello everyone! We've been making some plans on changing up our layout and just curious if we could get some fresh ideas.

Up until this spring we kept a large herd of boer goats and our farmyard was setup to reflect that. Now that they are gone, we'd like to take the opportunity to change up the farmyard a bit. Or maybe keep it the same but have some additions.

In addition to that, we also will be building a new home hopefully in the next couple years.

Right now our critters we plan on keeping are our two horses, chickens, turkeys and maybe someday we would like to have a milk cow(s) and peafowl.

So the main reason why I'm thinking of changing up the yard is the position of the hen houses. Where they are now...is not exactly easy to get to, due to the corrals and the corrals being connected to the pasture. We usually go through the barn, which is not idea. Plus, we just never see the chickens, which isn't much fun. One big hold up is that there is power going to them, which is a huge QOL and probably wouldn't happen right away if we moved them.

We would also like to add a round pen, fruit trees and to keep in mind an area for peafowl someday.

Also would like to use the open space just north of the barn/hen houses, instead of having to mow it....

I've kind of added idea to what I've been thinking so far (assuming there's not some ingenious spot to move the hen houses that I've missed and they stay where they are).

Just looking for some other ideas or opinions, the corrals can/will be changed anyway because they are designed rather poorly and aren't well suited for large animals.

We have lots of open space and it should be easy to plan this but I apparently lack that ability to think up something new. I'm better with working with what I got lol.

Sorry for the long ramble! Thanks for any insights if you're able to understand any of it! 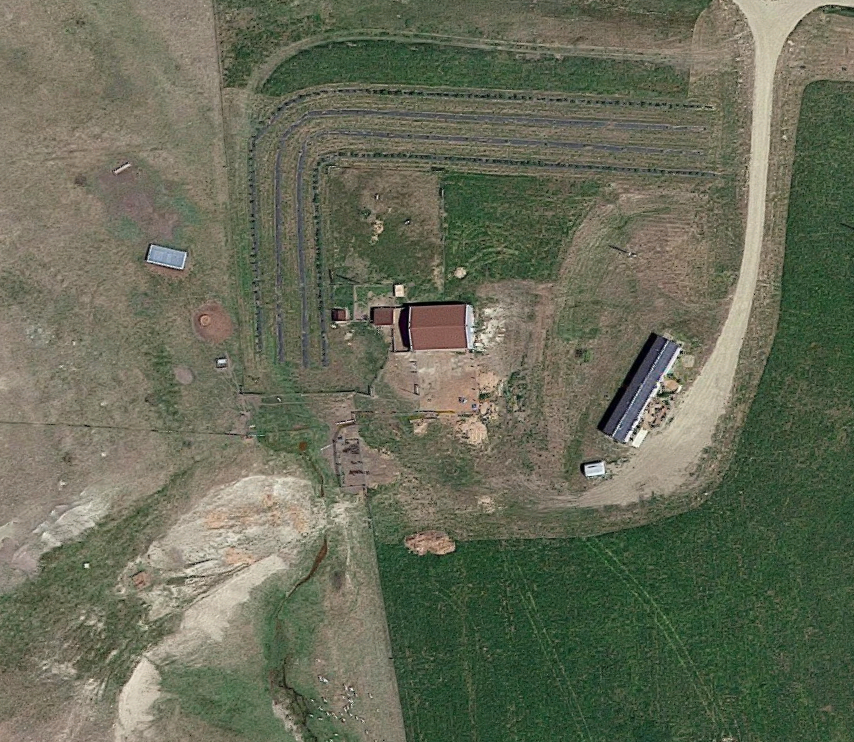 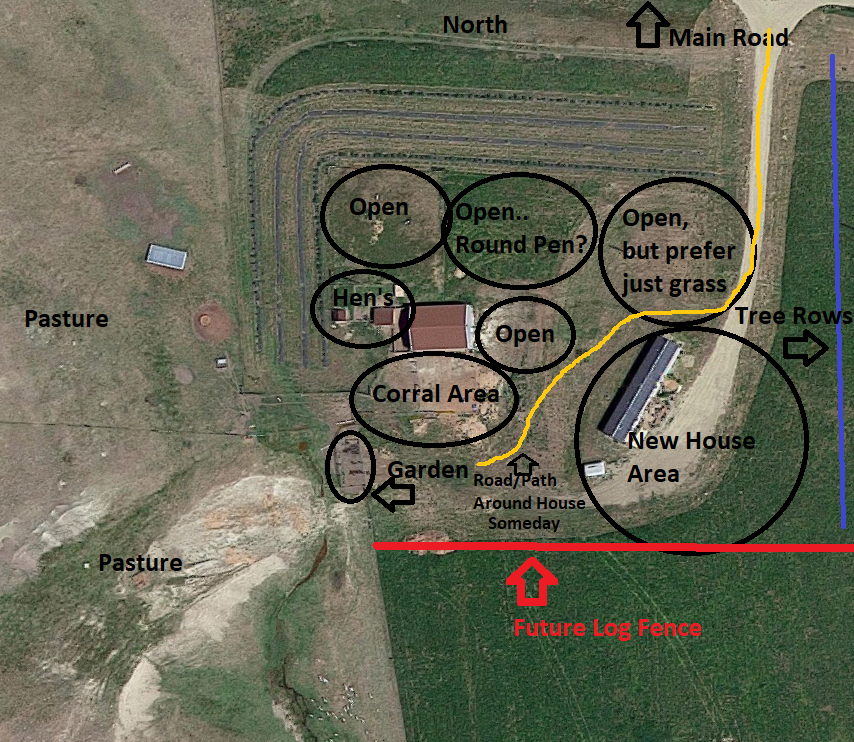 Very nice property! I see your in North Dakota, snow country! Chicken coop being close is more than quality of life when you get all that junk!

I was thinking if you, 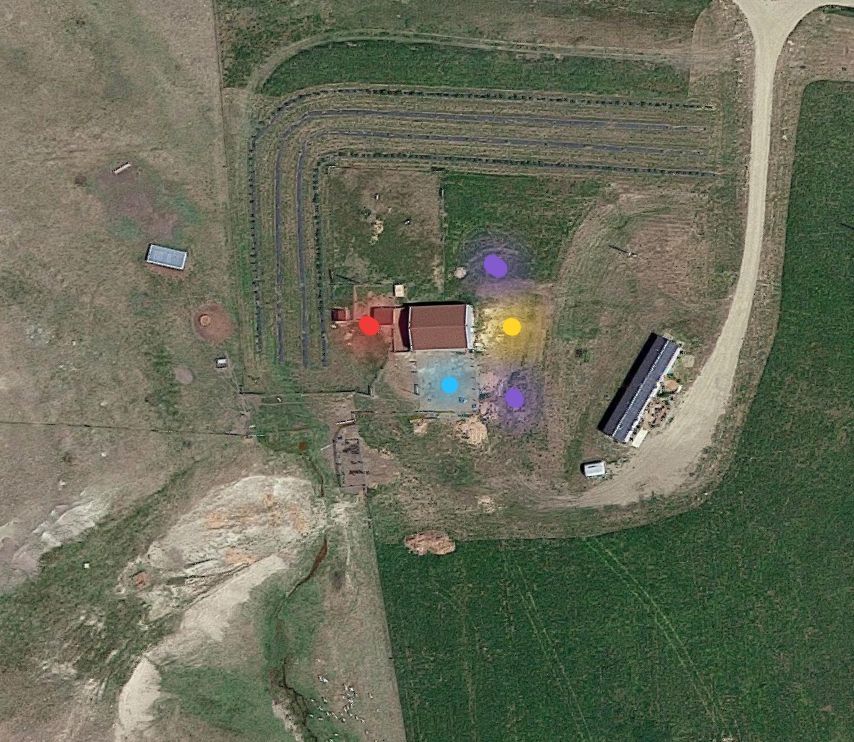 put the hen houses where the yellow dot is the corrals could be moved to where the red dot is, so the round pen would for where the blue dot is and leave you room for possible expansion into peafowl in the purple? Then the hens would be closer, still have power, the corrals and round pen could all be connected to eachother, the pasture and the barn. The peafowl might be better closer for ease or furthure for noise depending on your preference.

Thanks for the ideas, I'll keep them in mind. I forgot to mention that this whole set up is kind of on a hill side, which does make it more complicated.

Yea sort of out of my depth, but i saw you had no other replies so i figured id give it a shot. Im pretty good with rearrangement but ive only had one horse so also out of depth with converting to the larger animals. Are you getting out of boer goats for anything other than personal reasons? Ive wanted dairy goats for a long time but my property flooded and isnt quite rebuilt well enough to move in with young children yet.

We had too many for it to be enjoyable. That and since getting married, we kind of live in two places, due to my wife's job. So we no longer had as much time to give them as we used to.

We may get a few again someday.

Tuhmu said:
I forgot to mention that this whole set up is kind of on a hill side,
Click to expand...

How much of a hill side?
A pic from the ground showing the slope might help.

It's not too much, I don't have the best pictures at the moment. I'll have to snag some more. 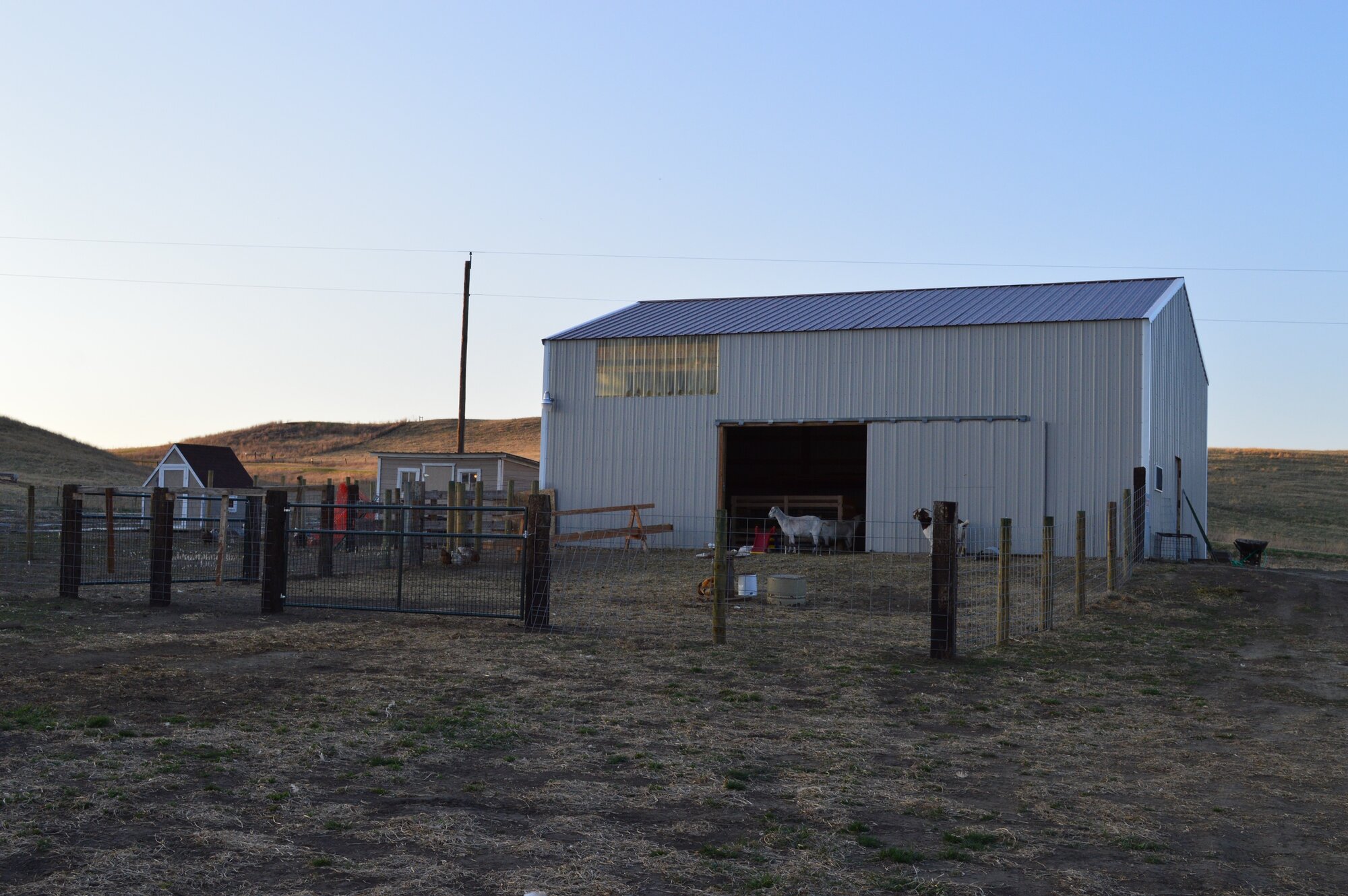 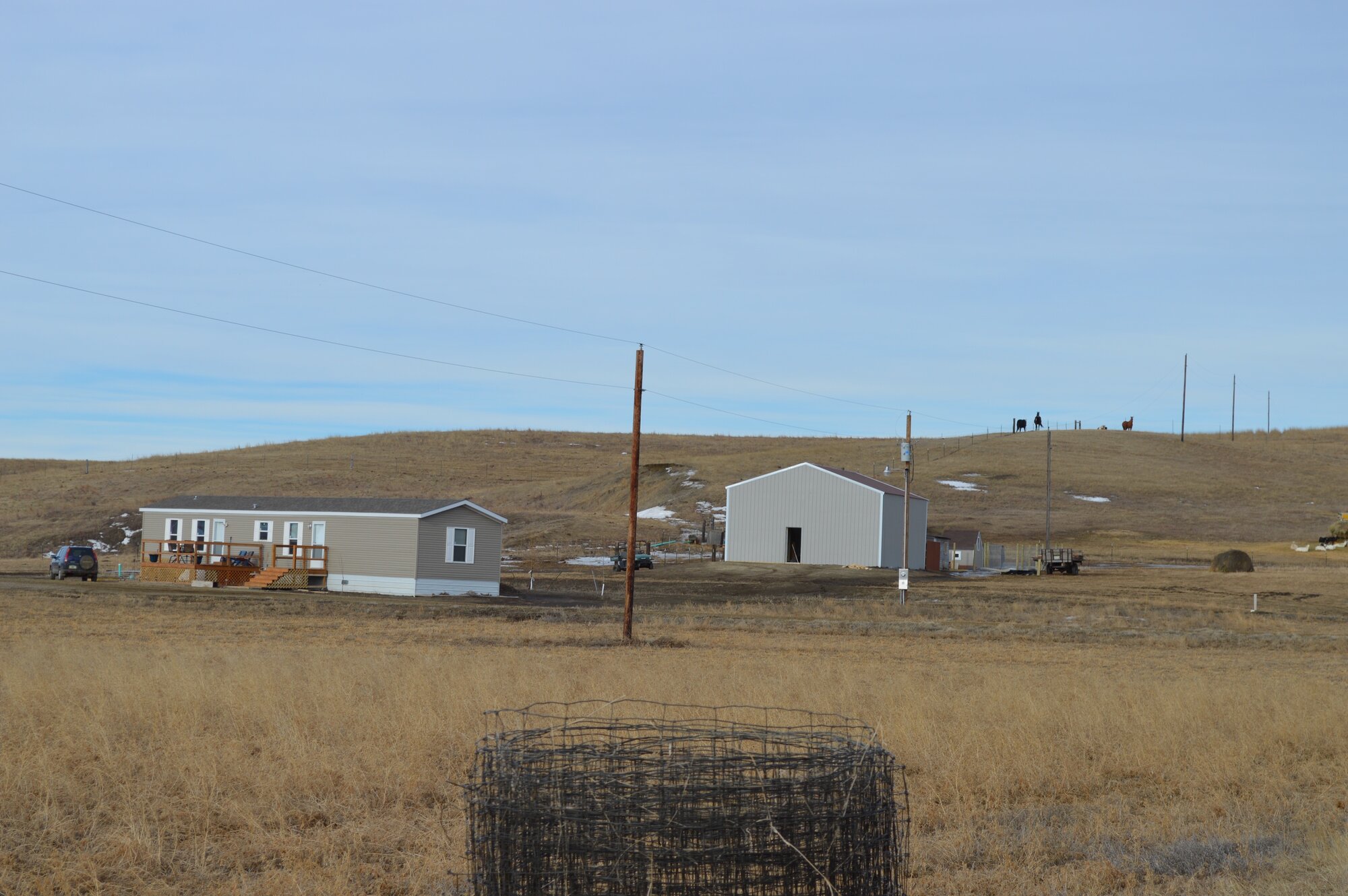 Any problems with run off from the hill?

There is right now actually with the snow melting. It comes down behind the barn(north side), then splits around the house. We are going make a diversion or dam there this summer.

Tuhmu said:
There is right now actually with the snow melting. It comes down behind the barn(north side), then splits around the house. We are going make a diversion or dam there this summer.
Click to expand...

Perfect time to dig swales and berms, when you can watch the water paths.
Other than the the hills probably aren't an issue except with running fencing.
You must log in or register to reply here.
Share:
Reddit Pinterest Tumblr WhatsApp Email Link