I hatched a clutch of 10 chicks from one of my hens back in April. As most chicken owners fear, the majority of the clutch turned out to be male; 8 of the 10 chicks. All of the chicks have been raised together and have never been apart in seperate enclosures, but I've recently noticed that the cockerels interact aggressively with each other. 2, 3, 4, or even 5 of the cockerels will engage in what appears to be fighting behavior at once. They'll grab anything that they can get a hold of being wattles, combs, feathers, and earlobes until one remains "victorious" . At the end of the day, they make their way into the coop and roost side-by-side like nothing ever happened.

I raised a clutch of 6 last year, and 2 were male. They never behaved like this and that whole clutch is still housed in the same enclosure, happy as can be. Is the aggression of the cockerels like a phase, and they'll grow out of it? Should I seperate the little dudes? Wait a bit? What should I do? 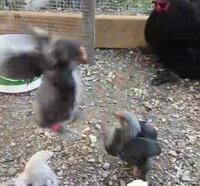 They are probably working out the pecking order. Some fight more than others. I wouldn't separate unless you see blood. Some roosters can peacefully cohabitate, and others will fight to the death. They are all different.

I had the same problem last year - too many roos - and couldn’t find homes for four of them. My dad and I ended up building a bachelor pad for them on our property across the street. At first, there would be bloody fights, once every three weeks or so for a few months, but they haven’t gotten into any fights (at least any that drew blood as far as I know) for several months now (knock on wood). So I’d just play it by ear and as long as they don’t seem to be fighting to the death (or severe injury), they might just need time to work it out. Good luck!

Just noticed these guys are little! Mine were at least 3 or 4 months old. Your littles might just be play-fighting right now (I‘ve even seen my young pullets take part in play fighting). Guess it depends on how long the ‘fight’ lasts.

EmilyRobb said:
The attached pictures are screenshots from a video that I took of 2 cockerels going at it as videos can't be uploaded
Click to expand...

Vids need to be uploaded to youtube, or similar platform, then linked here.

What are your long term plans for all these boys?

@aart long story short, I had 2 birds breed with some crazy genetics and it resulted in the possibility of like 12 phenotypes so I'd like to raise them until they're maybe 6 months old, so all of their feathers and coloration and patterning are solidified more or less and then I can determine which members of the progeny have the genetics that I want to keep. Others will be put up for sale. They probably won't get sold so they might go to a rescue place or just be given away for free. My bantam cochins don't have much meat so it's not really worth while to kill the dudes

Will my cockerels ever get along?