Finally out of the laundry room! haha

My wife was getting sick of chasing fly away chickens around her laundry room so I finally got the coop to a point where they could move outside... Still needs a few things but I think the birds are much happier out there! 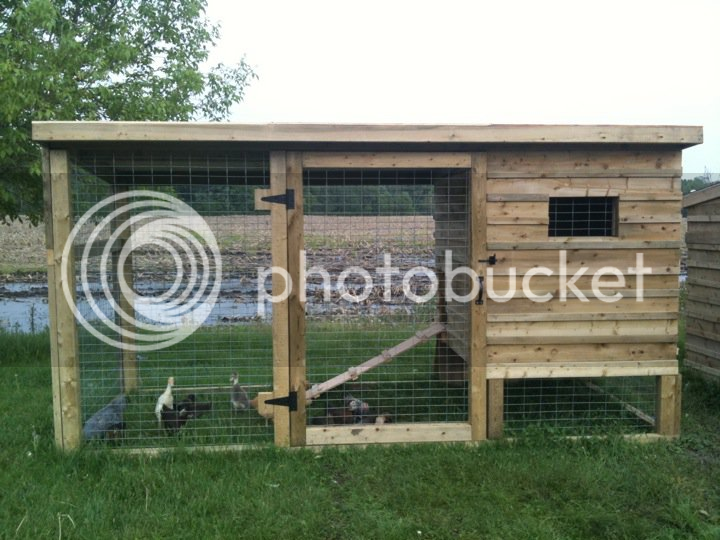 I'll try to post more pics later in the week!

looks great! you might want to consider adding some hardware cloth around the bottom, we've heard horror stories about chikens getting pulled through chicken wire by racoons. the coop really is beautiful!!!

I love love love your coop very much! Very rustic horizontal board and batten. I see it matches the adjacent building to the right. Where are you located? What a beautiful view your chickens have! They will make short work of that "lawn" in their chicken run.

I imagine there will soon be a predator or two lurking around looking for an easy meal - and I can just see a raccoon paw reaching through that 2x3 welded wire and grabbing one of your girls. Can I recommend you wrap the bottom 24" of your run with much smaller 1/2" x 1/2" hardware cloth?

What size is your coop? Looks great! I have a bad wing due to a surgury problem. brusied nerve healing slowly so just in the planning stage.

Hey gang, thanks for the replies! I've been away for work and couldn't get back to this thread until now!!!

looks great! you might want to consider adding some hardware cloth around the bottom, we've heard horror stories about chikens getting pulled through chicken wire by racoons. the coop really is beautiful!!!

Thank you very much Ginger C! I tuck the chickens away into their coop at night so hopefully that won't be much of an issue.... Not sure if the racoons would be around much during the day - haven't seen any of them anyways. Once they get a little bigger, I'm going to let the chickens out of the coop so they can poke around the yard and field during the day anyways so the 1/2" hardware cloth won't help them much if they aren't in the coop.

Quote:
I thank thank thank you very much Kichohana! lol I made it to match my dog run that's right next to it..... 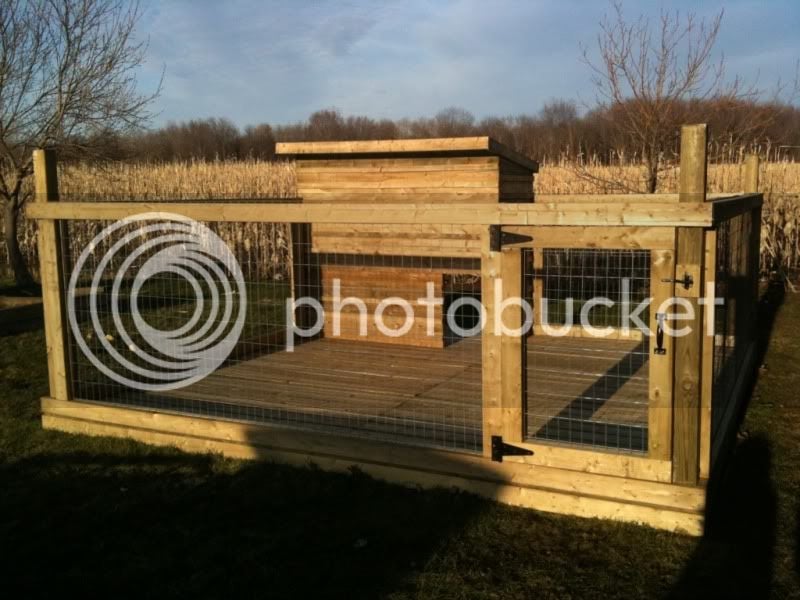 Like I said to Ginger C, I've been putting them to sleep in their little house at night, and we have two big labs in the kennel next to them, who have done a good job at keeping cats and coon's away from the yard so far, so I'm hoping that'll keep up. As for the grass, it's already taking a hit, which I knew would be the case - still trying to decide what to put down on the ground once the grass is gonezo... maybe sand? The birds are still a little on the small side so I'm not going to let them "Free Range" until they can take care of themselves a little better, and until they know where home is.

Wow you do nice work

and I like how you compensated for the hinges to mount them.

You might start seeing some coons now that the chickens are present. I agree I would add hardware cloth. I'd add it to the windows as well & put an apron on the bottom. Guess I'm paranoid. Here's my coop & its 20 ft from my house. I figure if I leave town are am not there the predators seem to know & they will do what they have to for a meal. Integrating a "new" bird -- not sure which route to take?

Ducklings in laundry room with backdoor access - is this a good idea??
2