I have a few questions that have cropped up in the early days with my first batch of little guys (er, gals... one can hope!). I have wanted to do this for years and finally live in an area where we are able- but that happens to be a in a country where we don't (yet) know the language! So I'm hoping someone can help me, because my Dutch stinks!

We adopted 2 one-week old Brahma chicks and 2 two-week old mystery chicks on Saturday. The little mysteries came from a private owner selling Cochin chicks, but she showed us a separate brooder full of kinky-feathered chicks and we went with them. I've included a picture, does anyone have any idea? Are they most likely frizzle Cochin? Or maybe Polish? They are super bossy little things! 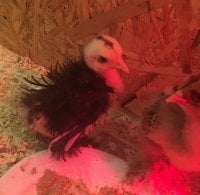 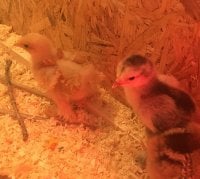 Everyone is doing great so far, as well as I can tell. No pasty butt yet, seem comfortable around their lamp, love their roomy brooder. I am trying not to let my "chick brain" (as my husband calls it, I am a worrier!) get to me, but I'm a little concerned about grit.

I fed them half a hardboiled egg on their second night because I thought one of the Brahmas seemed weak (now I realize it's probably just that she and her sibling sleep more being younger... darn chick brain!). Of course AFTERWARD I read that grit was needed with the egg, so I cut out a piece of grass/soil and chucked it in, but none of them have touched it. There's no chick grit anywhere here and the closest will be a one week delivery from the UK. I bought a box of chicken grit but am hesitating because it has added calcium from oyster shells.

Is it better to risk the calcium and pound some chicken grit with a hammer for them? Should I keep bringing in dirt and hope they try it? Should I go with parakeet grit (though all the various bird grits here also seem to have calcium)... should I get some sand from the pet store? Order the chick grit and wait a week? Chill out and just not feed any more treats? I apologize because I know these grit questions come up a lot, but I'm annoyed with myself and hate to think of the egg sitting in their stomachs!

Other than that, the two-week old chicks seem to be in a little bit of a stand off. Generally everyone gets along (all four eat, drink, sleep together), and there's plenty of space, but occasionally the elder two will fly at each other. No pecking or attacking happens, just a bit of a face off. I am understanding this as them being a week more mature than the Brahmas and beginning to determine who's boss with each other. They seem fine with the one-weekers, though occasionally one will herd one of them over to the food or out of her way, etc.

We have been thinking about adding a Silkie and/or a Wyandotte of similar age this week to complete our flock, but I wonder now if I shouldn't upset the balance? If maybe the Cochins/mystery gals will go after newcomers since they're already showing assertive behavior? Or if we should do it ASAP while they're still young?

They're little darlings is what they are.

Thosetwo are definitely frizzled somethings. Polish chicks often have what's called a vault, a bit of a cone head which gives them a puff...So I'm going to call cochin.

You don't need grit for just a bit of egg. Egg digests very easily, which is why people will use it for sickly chicks.

I would wait for the good stuff. They may protest but they'll survive without non-eggy treats. You don't want to risk the calcium.

And they're jousting! Isn't it cute? I'd add the other baby chicks now, but you might should keep them in the same room the first day, then put them in the brooder. Watch them and make sure they aren't too rough. Otherwise, a bit of jousting is normal. It gets better/worse as they get older...I have some four week-olds that are absolutely silly with it.

Nothing wrong with being attentive and asking a lot of questions! Tell your husband you learn more that way. : p

Your babies are super cute! The grit is really only needed if you are feeding harder stuff like scratch or seed down for them. The soft egg will pass right thru them so don't worry. I would order the chick grit from the UK just to be safe since all the other stuff you have found has calcium added.
The chicks will play fight a lot, mine like to dive bomb each other, its normal.

Thank you for helping me through my grit anxiety!

And for IDing the Frizzle Cochins. I am super in love with these little chicks. It's been a fun first week. My one and a half week old Brahmas have already outgrown the 2.5 week Cochins, seemingly in just the last day, and they were quite a bit smaller five days ago.

So far the Brahmas are the calm, gentle ones and the Cochins are the literal and metaphorical poo stirrers.

We just added in two tiny one week old Bantam Silkies and one of the Cochins is being a bit hard on them. Lots of feet pecking, jousting, running over and eating/drinking right from underneath their beaks, and the occasional random peck to the head. So far the Silkies have tolerated all of this well, eating and drinking, and semi-integrating into the other 4. They seem to find comfort with the Brahmas. It's still a little worrying with the occasional loud peep from the new babies. We checked on them every couple hours throughout the night and I'm staying home today to make sure they aren't taking too much of a pecking. I actually dreamt of the lot of them last night (protecting them during a robbery, keeping them safe from a hawk... o m g). I think all going well, these are the last additions for the foreseeable future... !

Uh oh, how bad is smooth grit for young chicks?
2