featherhead007 said:
I'm having trouble with my Rock garden today. They keep running around all over the yard. (And I mean RUNNING) No predators that I can see anywhere!

They are having fun! Chickens love to run sometimes!

Aurora has chosen a different chair this evening. She has been on sentinel duty all day today. 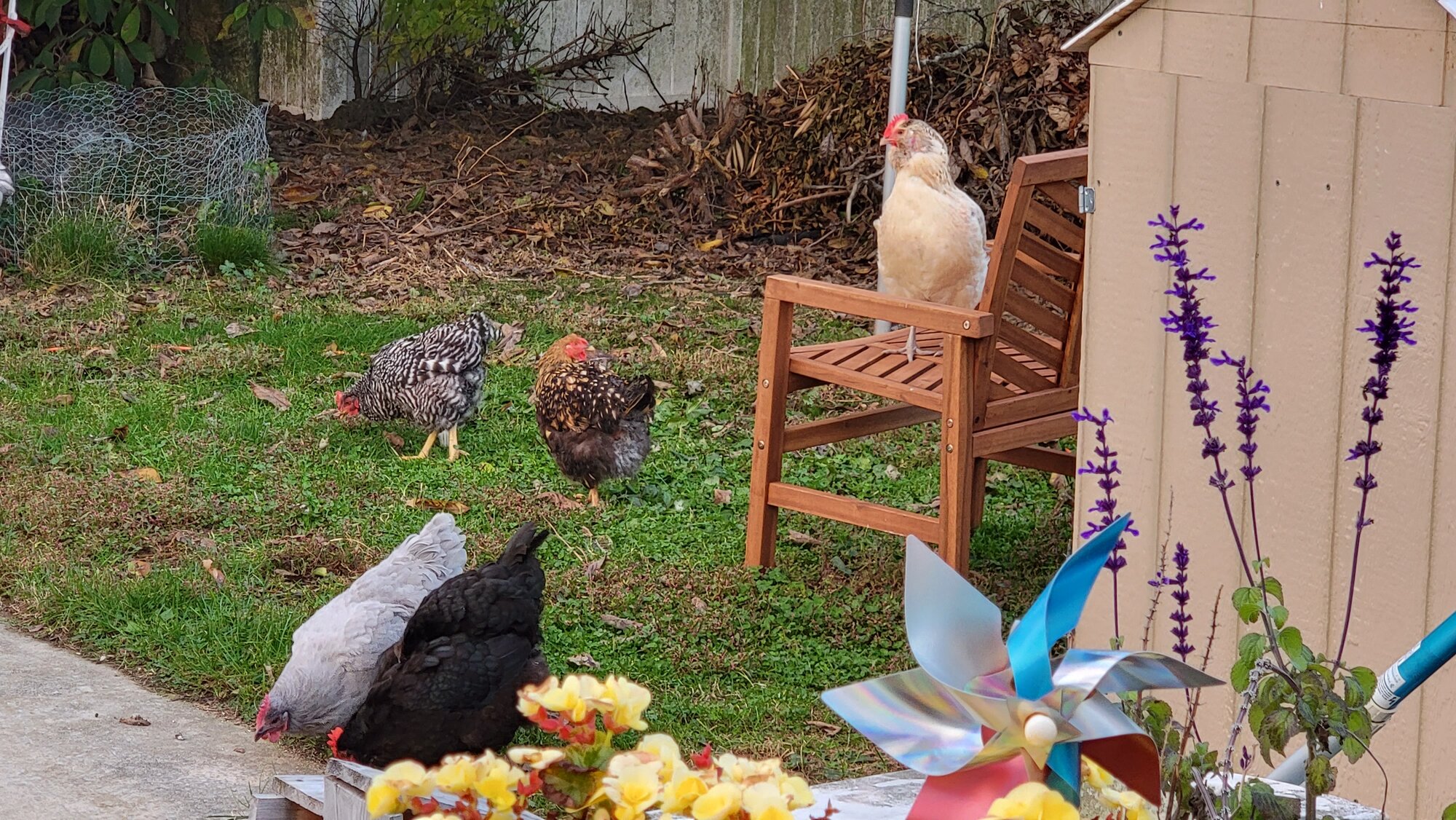 BY Bob said:
This is a reference to a Sharon which occurred a long time ago where @Kris5902 had a hen laying softshelled eggs. She wanted to supplement her calcium so she gave her antacid tablets ground up in her food. Not thinking about it, the antacids were berry flavored and dyed varying shades of purple. The purple dye came out in the eggs shells and thus her eggs were "colored" much like the beet eggs.
Click to expand... 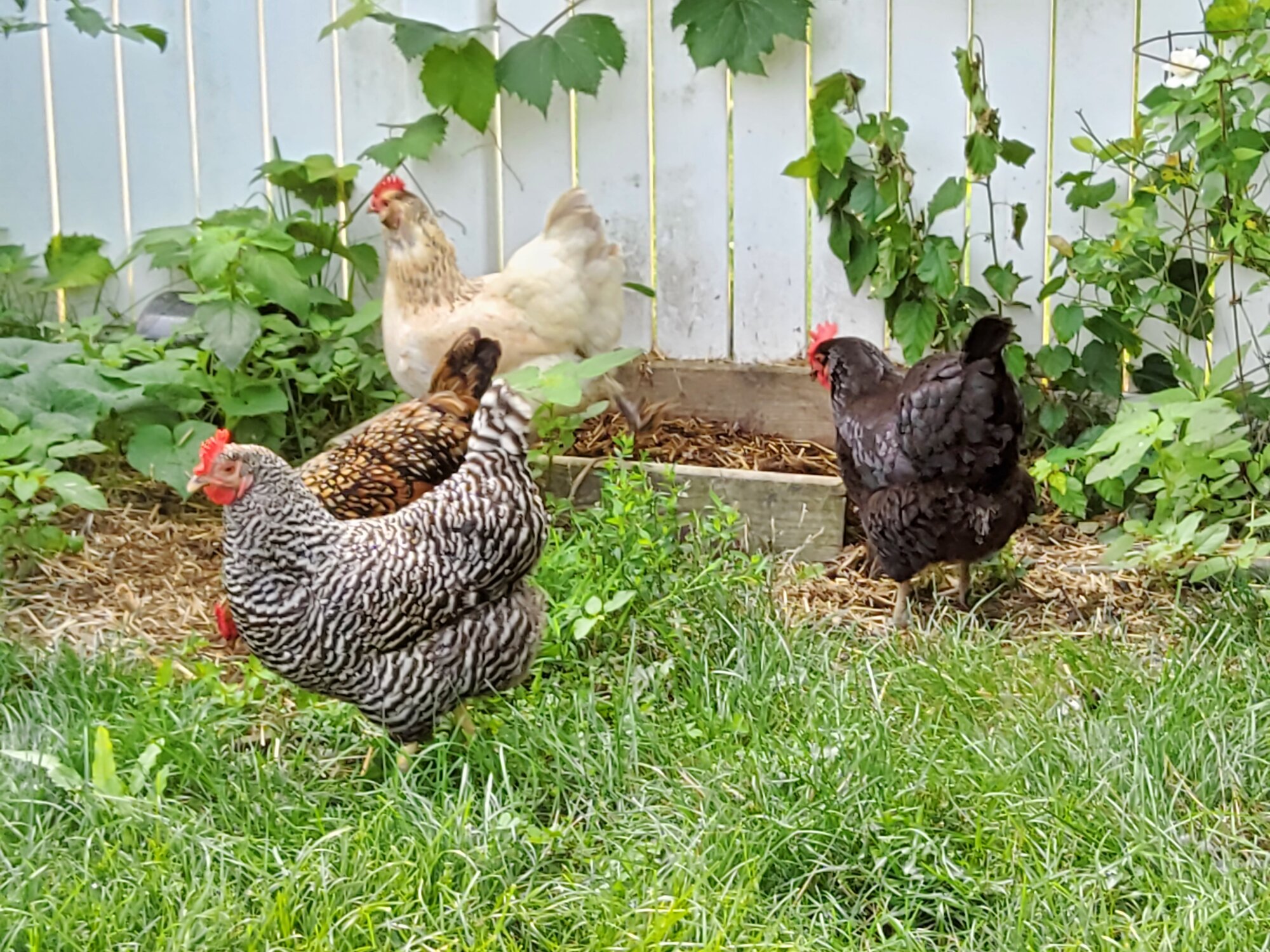 BY Bob said:
I bet you have some fertilizer handy.

ChicoryBlue said:
Big migration movements now with Red Tail Hawks based on our Franklin Mt. Hawk watch reports (central New York, it is an area that due to geography the mountain ridge sort of funnels and channels migrating birds).

Went to do the afternoon check on the hens and they are all fearful. Earlier today they were all out in the runs, in the sun, acting normal. Now Hazel and Popcorn were up in the coop, somebody in the nestbox even - the most hidden and dark spot - and Peanut and Butters frozen below the coop, trembling. Hazel's making a warning series of low poppy growls, like Morse code but not intermittent, steady with each breath. I don't see anything but I suspect a Red Tail in the area must have made an appearance. Gave out some sunflower seeds in the coop run, right next to the ladder where they'd feel safe, and everyone but Hazel partook, coming out for it. I offered Hazel some on my hand up in the coop but she wouldn't take it. Afterwards, everyone went back up into the coop. Hazel's still growling. Checked all around the electric fence and it's good, 4k volts.
Click to expand...

Please stay alert and keep an eye on them. I did not realize that hawks migrated. Interesting...

micstrachan said:
Yikes! I wonder if they were visited?!?!

I forgot to mention last week… when I was sitting in the run, they must have spotted something as TWO of them were doing a quiet purr and almost ALL of them were absolutely still. Very different from the aerial predator call. Maybe what Shad calls the warning call?
Click to expand...

Only because I happened to be caught up and on!

Shadrach said:
These hens, at least the Red Sex Links come from combi cages. This years and last years are part of a 2000 hen rescue mission done by Pear Tree Animal Sanctuary. I think 6000 were due for slaughter. The rescuers had to pick the hens they rescued. They could only cope with a limited number. So 4000 or so got killed. They are probably in the Cat and Dog food people buy for their pets in some local supermarket or even on the chicken bits shelves.

This is what their lives would have been like.
View attachment 2881116

There are 22 hens left now. Three have died since I have been doing what I do there.
A vet visit costs about £60 minimum where I live. Not all vets are honest caring people. You could spend easily four or five hundred pounds on each hen that got sick following a bad vets advice. For pretty much all these hens, by the time an illness is serious enough to warrant a vet visit the likelihood is that hen is going to die soon and if I and a vet did manage to keep one alive, they would probably be living in a great deal of pain.

Firstly, I can’t afford and neither can the person who took them on £500.00 on each hen that gets sick.
The vast majority of internal health problems with such hens is terminal. Yes, you could drag their lives out for a while longer but that isn’t what I am about.
Much like the people that rescued them in the first place I have to make choices and those choices are about who lives and who dies. But more importantly my choices will be who is likely to live a life of acceptable quality and who is going to be a sick hen dying slowly in what appears to be better conditions.

I have four hours a day to give them atm. I doubt that many people spend more than an hour a day with their chickens. I know of a few here on BYC that spend considerably less time with theirs. Bear in mind they are not just outside my back door. I have to go to the allotments taking what I need with me and if it rains, or snows, or the wind blows then I stand out in it with the chickens, or take shelter in their coop with them.

In addition to those four hours a day I buy them the day to day drugs like de-wormer and mite treatment etc and make them a container of “treat” food, usually fish or meat with something each day.

Most of all, I get them out of the run which incidentally is of adequate size according to BYC.
View attachment 2881127
This is a fair approximation of what the majority of chickens who live in runs live in. You may have noticed that most pictures of chickens that one sees are of the chicken when they have found to be sick and brought inside, or they are posed pictures. One rarely sees the run they came from.
There are exceptions.

Part of my advantage is that I have a range of skills and knowledge that many keepers would need to seek a vets advice or treatment for and that will save a few for a while longer I hope.
However, I have not even examined every chicken there properly yet let alone treated what is approximately a third that need some intensive help. A few of them just do not have the reserves, or the immune system strength to cope with any infection or virus or heavy parasite load. I can’t help a wry smile crossing my face when I read about average weight and keel bone test. Some of these hens while looking okay by judging by feathers and shape are not carrying enough weight to make a decent chicken soup with. You would need to pick a few up to fully appreciate the horror of their condition.

For me, the transition from a cage to a run such as that I’ve shown above isn’t what I would consider to be a massive improvement in living conditions. I want these chickens, even if it’s only for a relatively brief period to experience what it is really like having grass under their feet, plants to forage in, space
to run, places to investigate; to be as much like a feral chicken living free with the advantage of Bucket Boy supervising for the entire time they find out what nature is really like. Ten square feet in a run doesn’t hack it imo, nor does ten square metres.
I want something like this for them.
View attachment 2881130
View attachment 2881132
View attachment 2881133
View attachment 2881134


Given the horror of their earlier lives it doesn’t seem much to ask for and for those who fail to thrive, a swift and painless death.

So, I will treat for the basic health problems but there won’t be any vet visits unless it’s an injury. I will help those in greatest need first and those who have internal problems, even crop problems will have to wait given most crop problems are symptoms of an underlying problem. For those with underlying intenal problems like EYP and other reproductive disorders the moment they act sick that will be the signal to end their lives. They have suffered enough and while 4000 dead out of 6000 seems terrible I feel that for many death was the best option for them.
Click to expand...

I get it. I would do the same but probably with more vet intervention mainly because of my existing relationship with Dr Mark who is a decent human and does not overcharge.

I just spent 5 minutes watching Sylvie and Legertha chase song birds. it was the sweetest silliest thing. They were most intent on running them off and every time they run one of another would land behind them.

I was so absorbed I did not think to film it.

So instead I took this film of them happily eating some grass and chasing to each other. I hope you can hear the sweet little songs they make to one another.

I just spent 5 minutes watching Sylvie and Legertha chase song birds. it was the sweetest silliest thing. They were most intent on running them off and every time they run one of another would land behind them.

I was so absorbed I did not think to film it.

So instead I took this film of them happily eating some grass and chasing to each other. I hope you can hear the sweet little songs they make to one another.