rural mouse said:
Send it here. We need it...badly....or next summer will be worse than this one for fires.
Click to expand...

Gladly. I'm packing it in a box right now. What's your address?

Chicken Tax for being silly 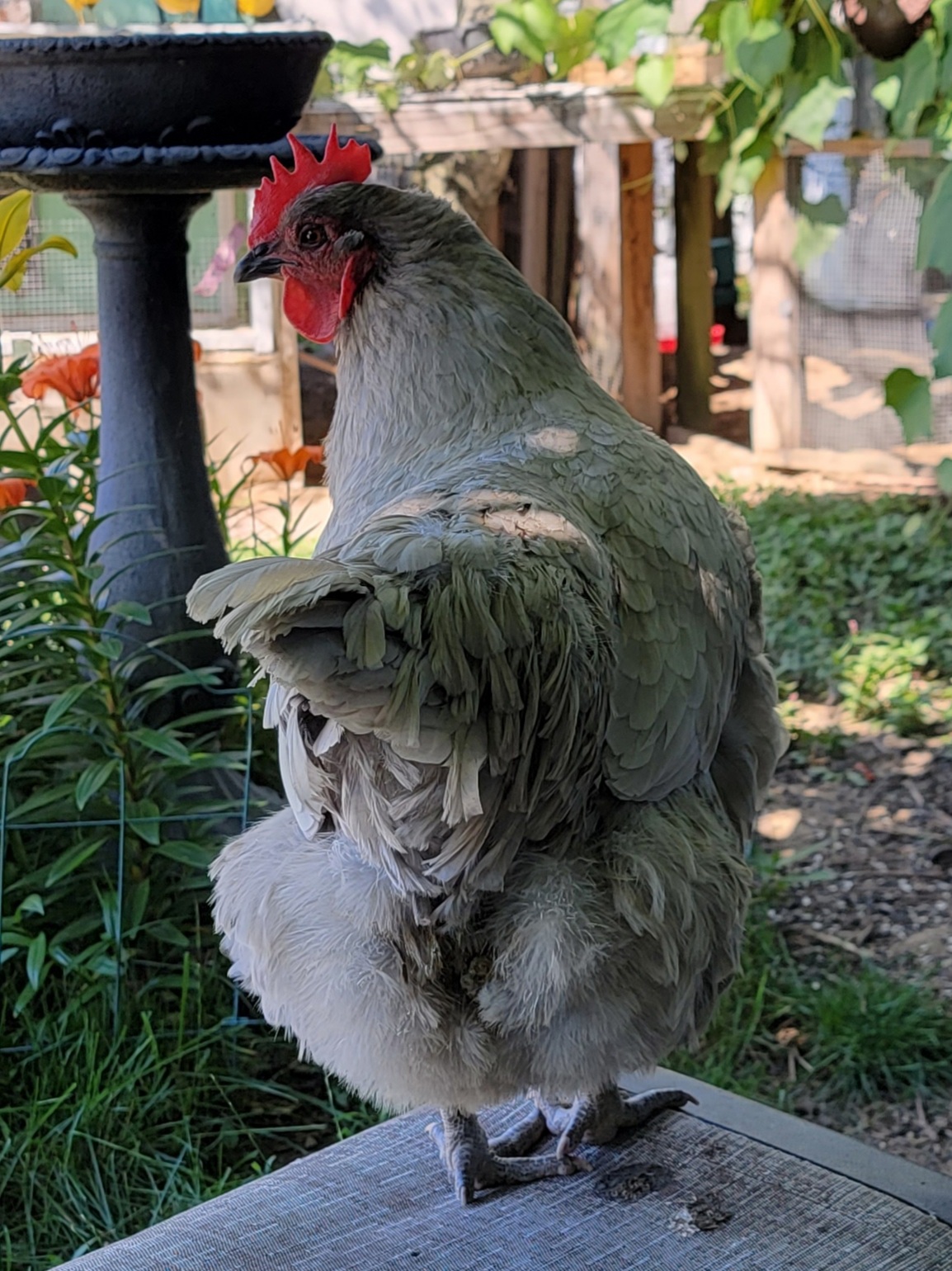 Beautiful patio pictures, and the chickens look great, but what is all that white stuff covering up everything?

I think I remember seeing that stuff, years ago.

LozzyR said:
Gee, I wonder why?!

What kind of bird is that?

Arizona update: She came out to greet me this morning. I fed her, and I counted 12 eggs (and she cleaned up her nest a little) she still seems healthy!

Ldolan said:
What kind of bird is that?
Click to expand...

I see no one has answered...I don't know much but I think that's one of those chickens called a frizzle. And that's @BY Bob 's Polish hen Phyllis on the laptop. They are on Beakbook sharing a cuppa tea or coffee and probably sharing stories about humans.

ChicoryBlue said:
I see no one has answered...I don't know much but I think that's one of those chickens called a frizzle. And that's @BY Bob 's Polish hen Phyllis on the laptop. They are on Beakbook sharing a cuppa tea or coffee and probably sharing stories about humans.

I thought the bird was a frizzle! It looks like it’s mixed with a speckled Sussex.
S

...and her comb is such a bright red....clearly she is still laying...

BY Bob said:
Gladly. I'm packing it in a box right now. What's your address?

Chicken Tax for being silly
View attachment 2911848
Click to expand...

Make sure to include dry ice so it doesn't melt. And make arrangements for Alex to do a flyover for distribution. 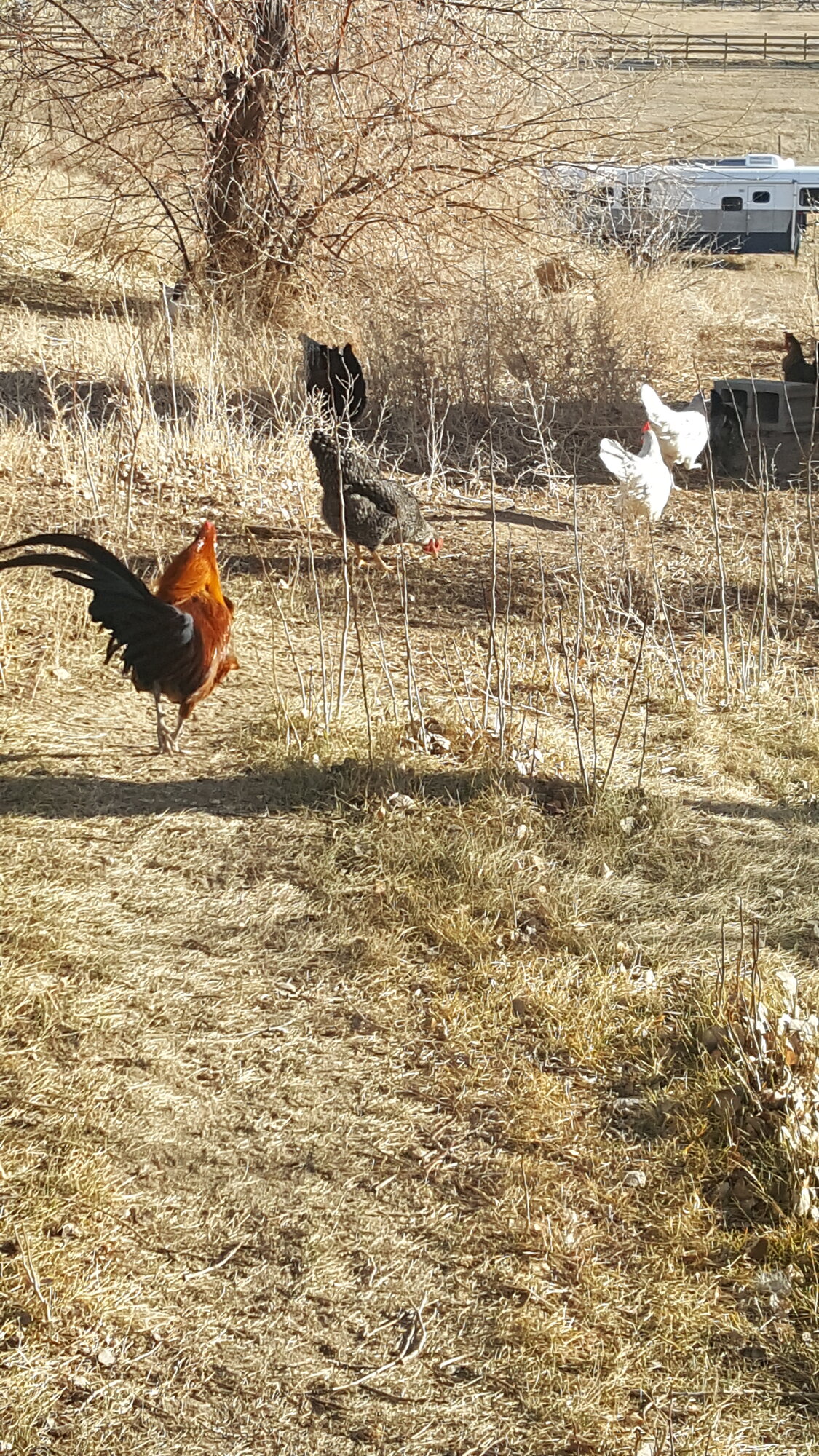 Reality check: no treats. Looking for eggs (6 so far, record with this bunch)

featherhead007 said:
Arizona update: She came out to greet me this morning. I fed her, and I counted 12 eggs (and she cleaned up her nest a little) she still seems healthy!

How many days has she been sitting? I ask because unless you miscounted the other day when you said there were 9 someone else is laying in her nest. That is problematic because she is not going to push those eggs aside but tuck them under her and then you will have problems at hatch time. I would take something and go mark the eggs under her, she might get upset for a few minutes while you do this but she'll be fine, depending on how grouchy she is while broody though you could end up being beat up. I'm glad she came off on her own though, because I think she's in the first week of incubation right? It is worrisome and stressful but all my girls during the first week will sit tight and try to go 3 days without moving. I will leave them alone if they don't come off willingly for 2 days, but if they are going into the majority of that 3rd day in a row sitting I will remove them from the nest under protest, and walk about 15 to 20 feet away before setting the hen down. Now she's mad and ready to fight, but she's not allowed back on the nest until she at least relieves herself. Once she does she can go back even if she did not eat or drink, I find I can then get her to eat and drink a little bit while she's back on her eggs. After the first week though my girls settle into a routine of coming off daily for about 30 minutes or so until the final few days. Normally the day or two before I expect them to hatch she'll come off and spend a good hour or longer off, furiously eating, drinking, and dustbathing. I think she knows those chicks are coming and she's sitting tight until the last one is out. When I see that final time off even if she goes 3 days without getting up I'm not messing with her anymore to get her off the nest. I'll go sit beside her and listen, and when I know she has 1 or 2 out a shallow dish of chick starter and water is placed right in front of her so she can encourage them to eat while staying put. Also while all 12 may not be fertile, it's safe to assume that even though Jaffar has 12 ladies to divide his attention between that the majority are fertile. Now whether they all develop and safely hatch out is out of anyone's hands. I hope she has a successful hatch, these would be Jaffar's first chicks right? I think they would make very pretty babies and bet that half that hatch will have some degree of the cochin feathered feet.

Yesterday at 10:59 AM
Happy hen lover