Do you think this is fowl pox? If so what would you recommend to help?? It's not as noticeable in the pics but there are black bumps on my rooster. In the second pic a white thing developed on his favorite hen. Her eye has only ever opened 1/2 way so that is normal for her.
Also, I have chicks ranging from 1 week to 3 months old. Do they have a higher mortality risk? None of them are showing any symptoms. Everything seems normal except the spots. 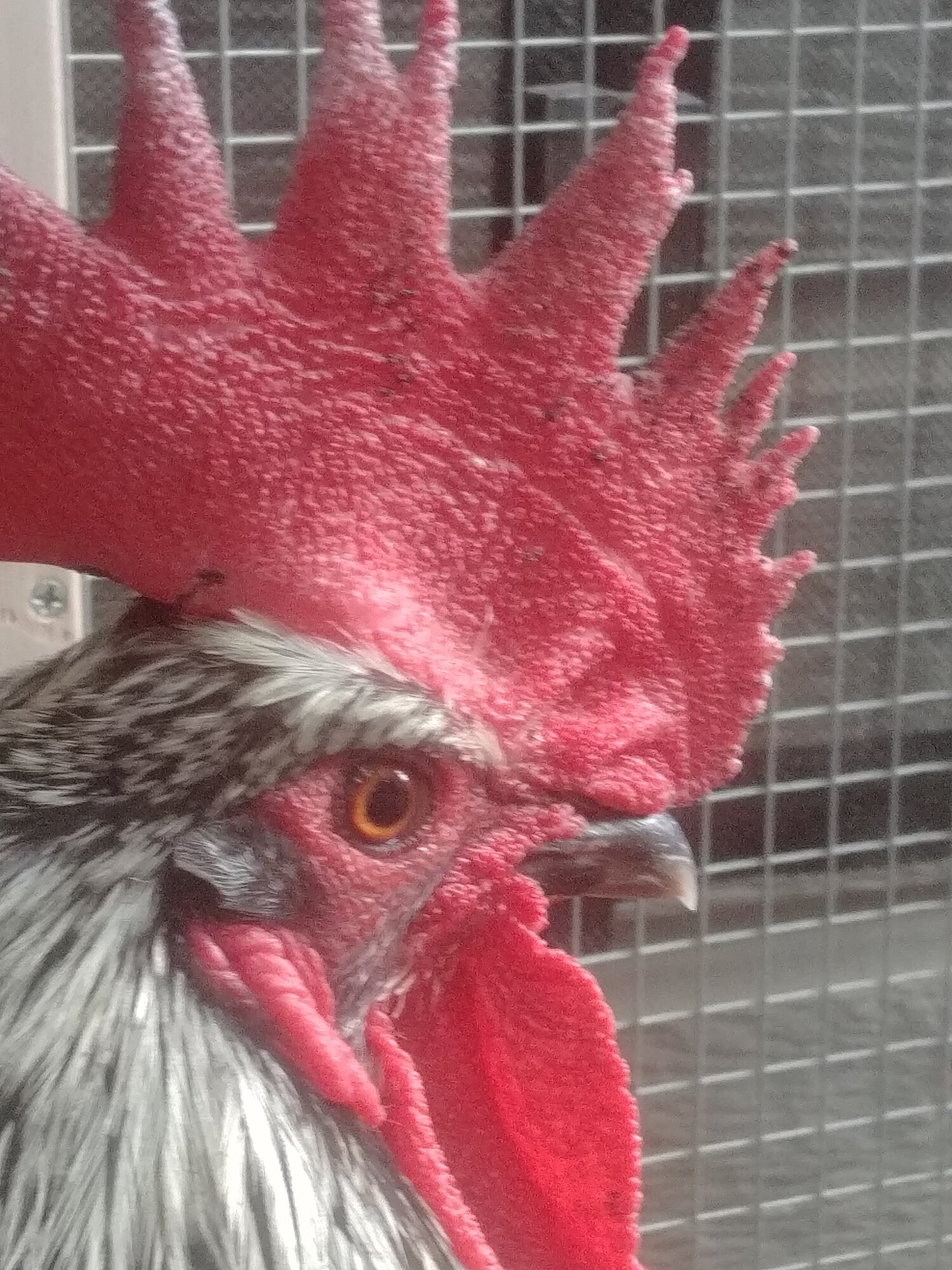 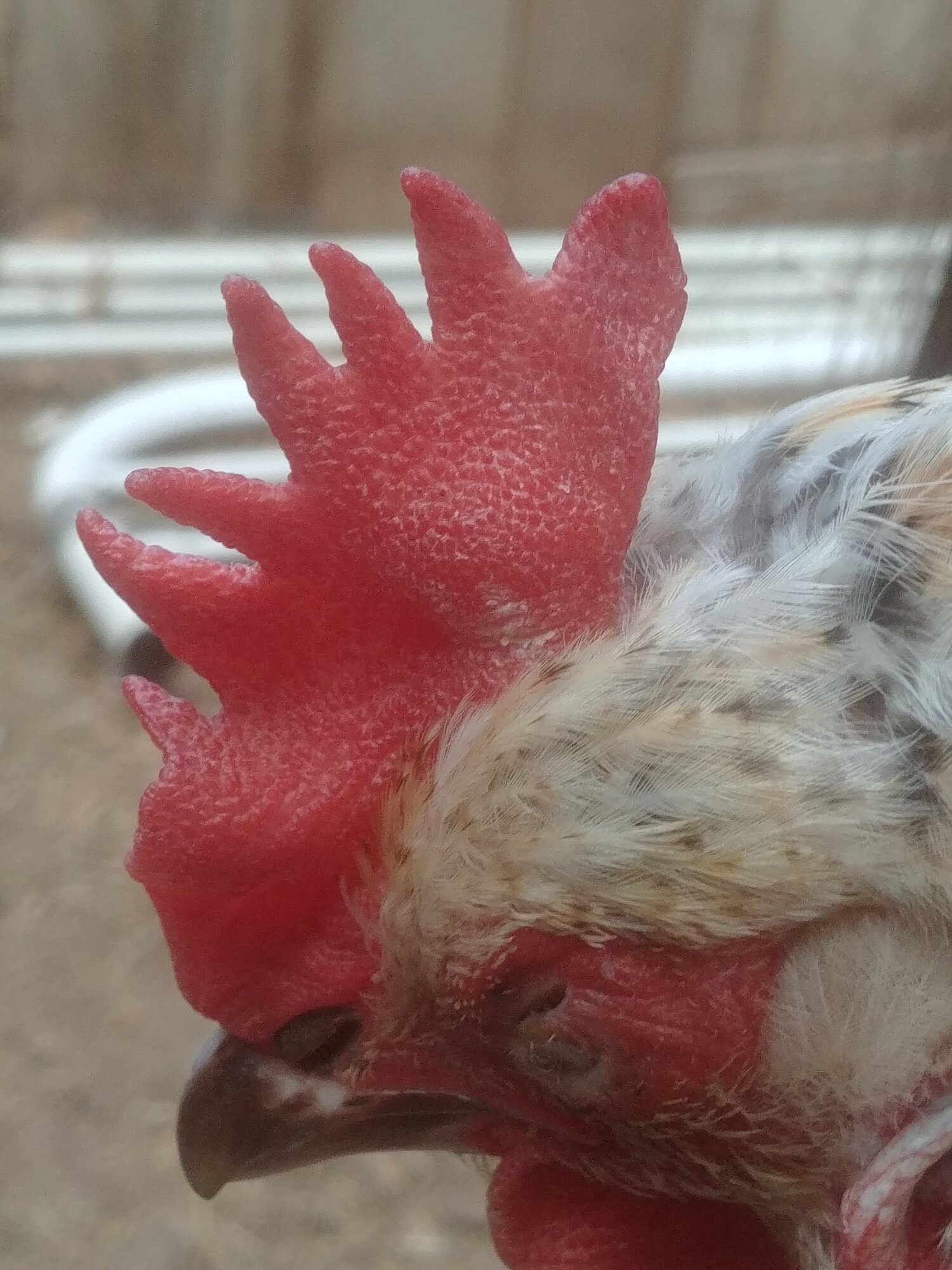 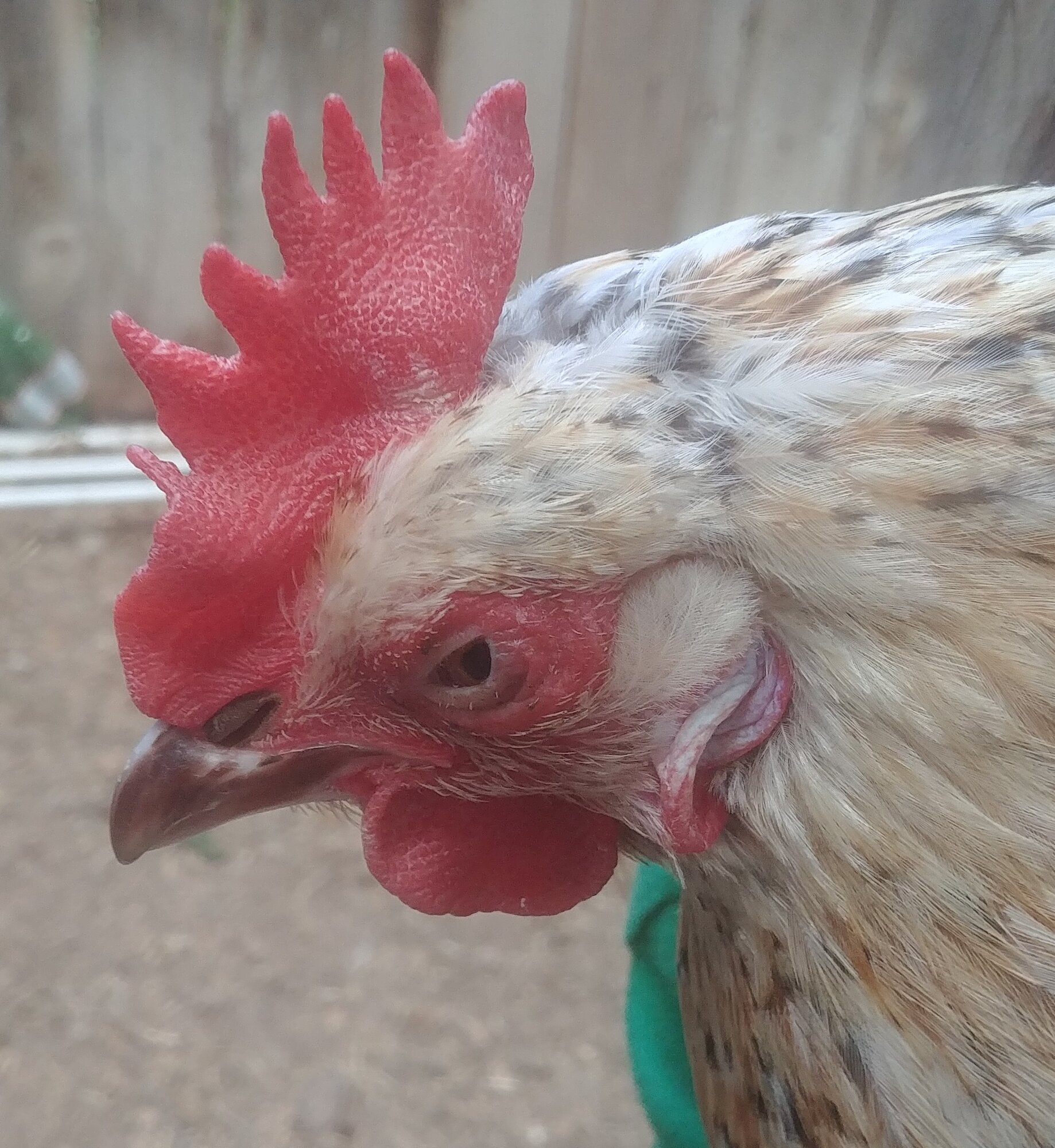 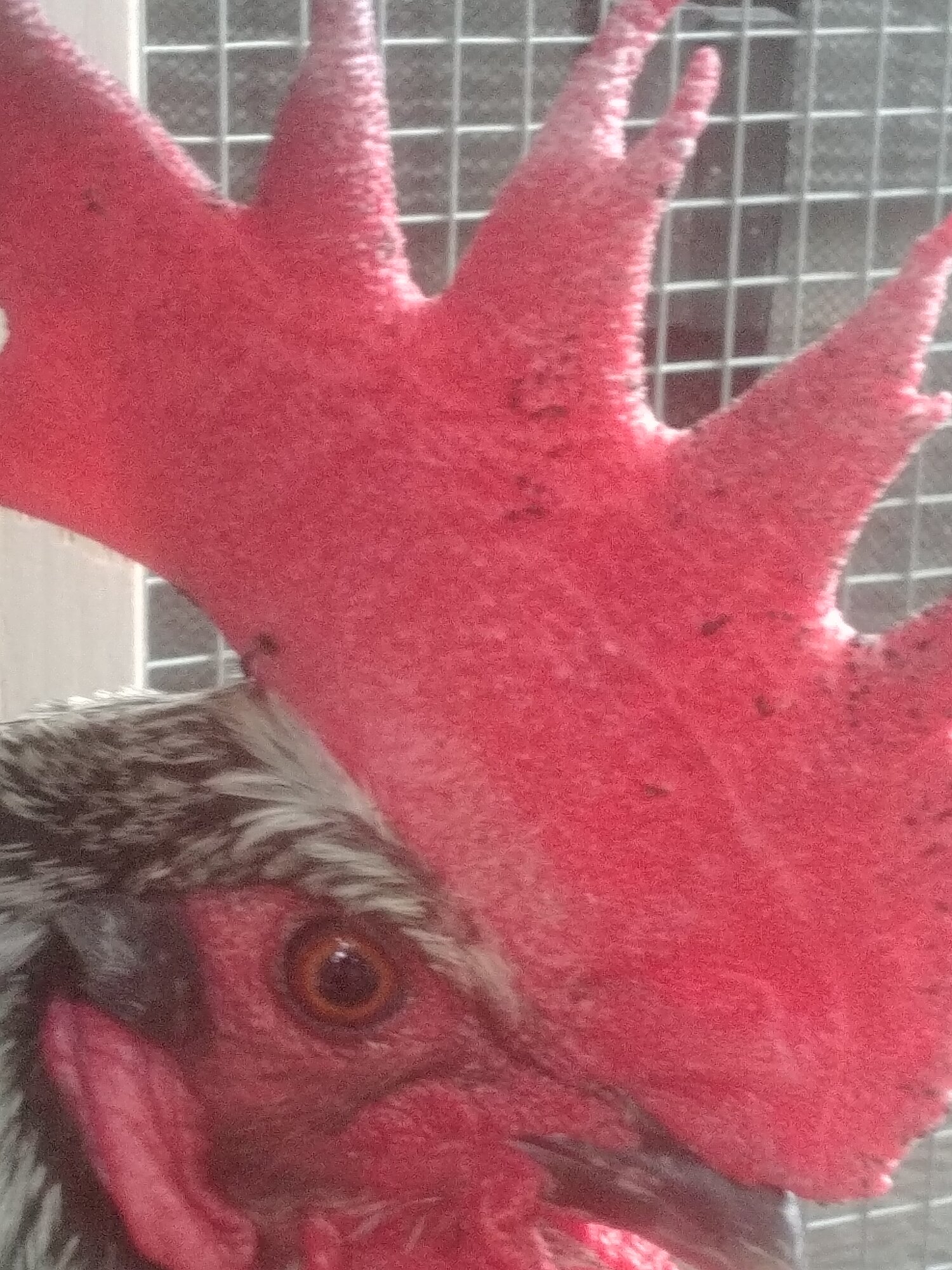 My flock went through this about 2 years ago, very traumatic for me but not so much for them. Can you get a better picture of the eye? It looks like a scab there?

The roo or hen?
I will asap. That eye on the hen hasn't fully opened since birth.

On the hen, I can't quite zoom in clear enough but mine had yellowish scabs that came up on their faces, wattles, combs and ears.

Other than looking a bit watery her eye looks normal to me. I hopefully got better pics of both birds in question. I also checked both for mouth sores. All looks ok. Perhaps a bit pale but I've never looked in their mouths before so I can't be sure. I am trying to upload the pics. My internet stinks..

None of mine progressed to the wet version of the fowl pox, all stayed dry thankfully.

For treatment, I caught up all of my hens (buff Orpington and Easter eggers) and contained them as they were all free range at the time, just to make treatment easier on me. I had two waterers available, in one I placed oregano stalks, in the other a bit of apple cider vinegar with the Mother. I also rubbed them daily (and gently) on their sores with iodine to help them dry and flake off (hopefully) faster. Unfortunately a virus is a virus, and must run it's course. The Easter eggers were by far the luckiest ones, they had minimal affects from the virus. The worst of the EEs had one eye get foamy, and eventually scabbed fully over. But the buffs really suffered. Their large combs and wattles were covered in the scabs and one of them became completely but temporarily blinded by scabs over both eyes. I will not ever again buy a chicken with large combs and wattles because of this; the EEs have small pea combs and were able to be turned out about 4 or 5 days after I penned them up, mostly scab-free. The comb/wattle size may not be a factor because I never saw this mentioned in posts I read about fowl pox, but I can vouch for what happened with my chickens. The buffs however lasted 2 weeks, with the worst one taking almost 3 before I could turn her loose. During this time they did not act sickly, and continued to lay for the most part. I had never heard of fowl pox before in years of raising chickens, and really I seemed much more bothered by their condition than they did though.

Hopefully these can do the trick.. Thank you. 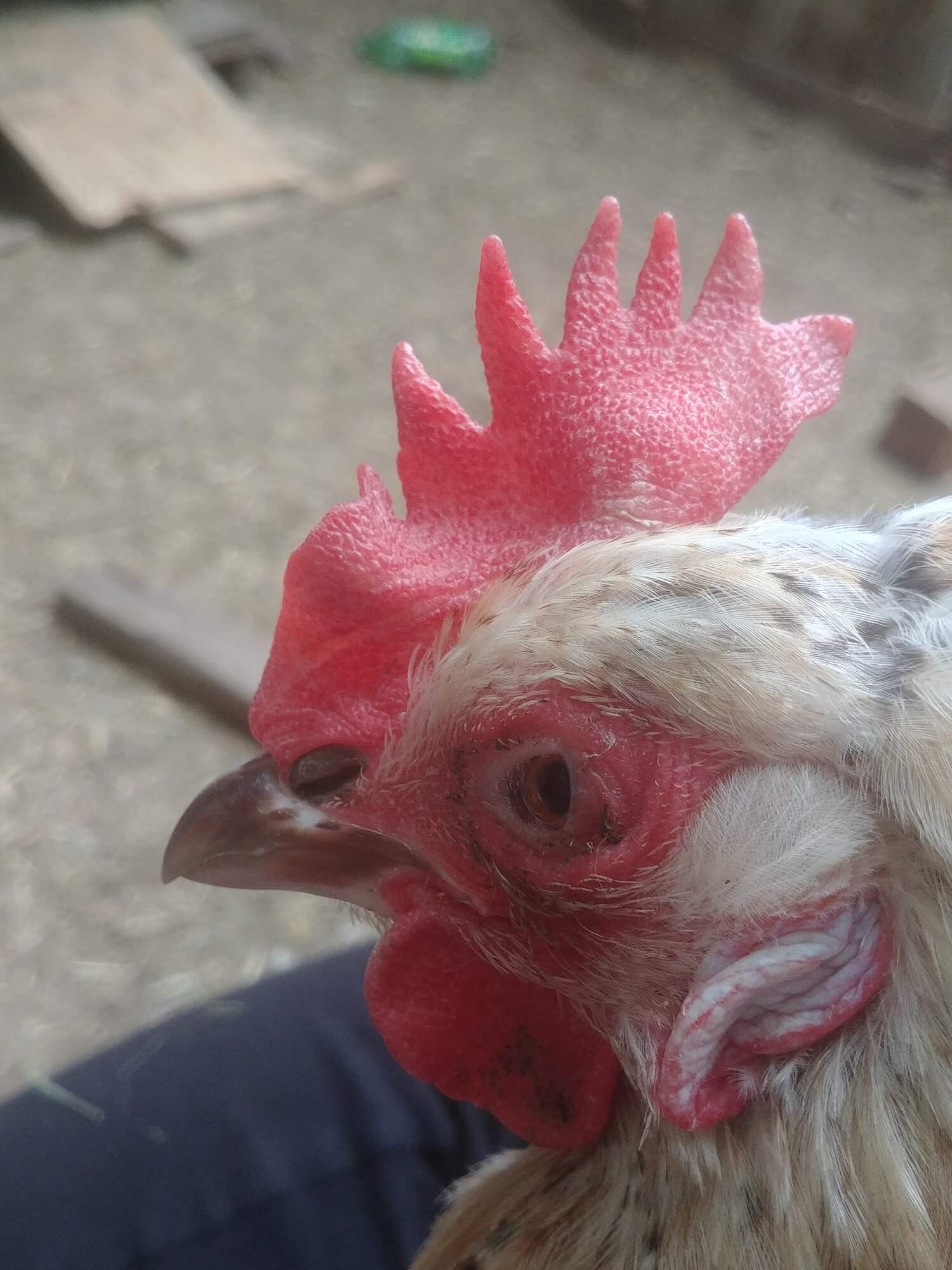 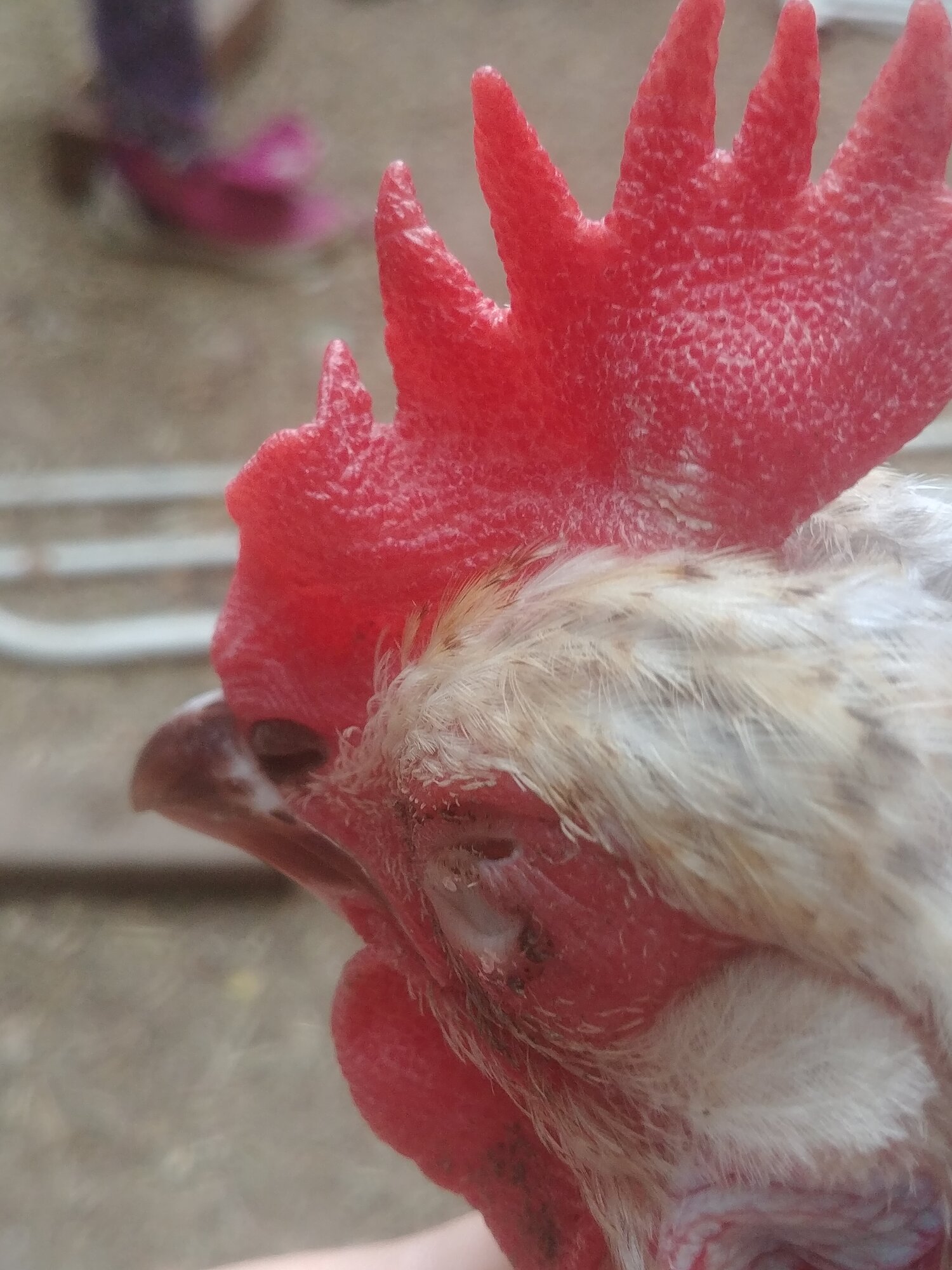 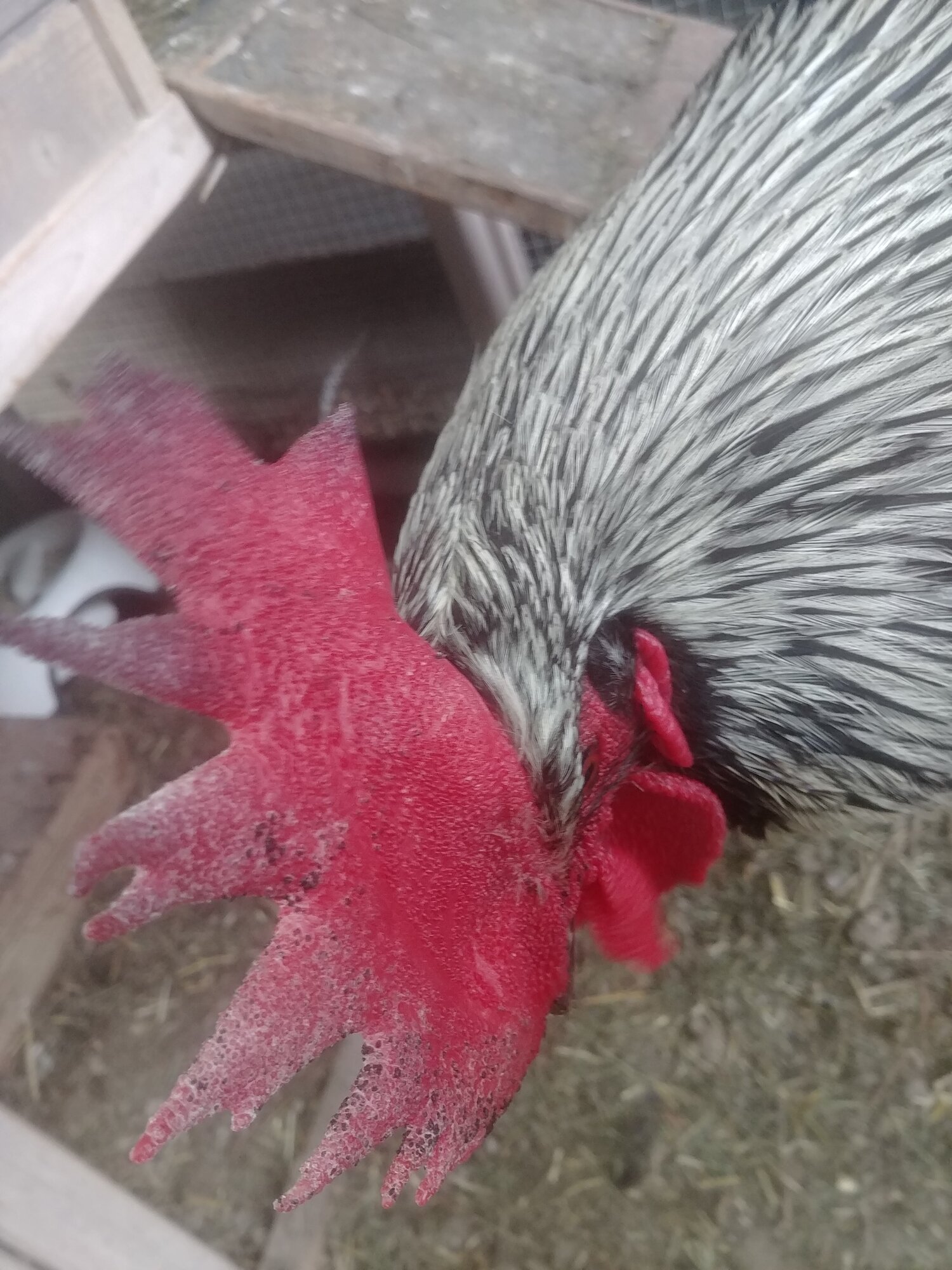 I really am considering letting it run it's course through my chickens. From everything I can find they are immune once it is said and done.. I have a small flock though. My rooster is separated right now due to another issue. I do the mother 1 tbs per gallon regularly. I have also mixed small amounts of bonesett and a bit more oregano herbs and brewers yeast in their food. Hopefully all works out with 0 mortalities..

I did not have juveniles at the time, but did turn loose 4 more EE pullets a few months later. One of them immediately came up with scabs near her left eye, but again she had a pea comb as well and in 3 or so days it cleared up and she was fine. I have had no problems since then so I hope they have herd immunity lol
B

I have a chick that has a scab look thing on both sides of her beak. It’s been there since last Saturday how do I know if it could be flow pox. And if it’s not do I get them vaccinated?

M
Pox with babies on the way

Is this dry fowl pox? What do I do?