I have a sweet White Crested Black (large fowl) Polish roo that is getting beat up on a regular basis by the other roo in his pen. I don't have enough pens to separate him right now, and I really don't need him for breeding anyway (as is typical, I have too many roos!!). The dominant roo wasn't being too rough on him at first, but now that breeding season is in full swing he's giving the poor guy a real hard time.

His temperament is very sweet and non-aggressive, though I can't guarantee that that won't change if given hens of his own and a pen without another rooster! He is out of the same lines as the birds pictured on my web site (link in my sig line) but he is honestly not as nice as my other roos. He is pretty rough looking from being picked on, and his crest is not so great--I'm not sure if that's because he was born that way or if it's from being picked, so if you're wanting to breed show quality birds he may not be the roo for you.

I really like the little dude, but he's starting to look real rough and I think it would be in his best interest to go to another home where he could get some TLC! I am in Southern Maryland, but I might be going to the Delmarva Poultry Show in Delaware at the end of the month, so maybe could meet someone along the way or nearby (I can't take him to the show to meet anyone though, as I'm not exhibiting any birds and the rules of the show prohibit anyone but exhibitors from selling birds). I don't want to ship.

He's free if someone would like to give him a good home! 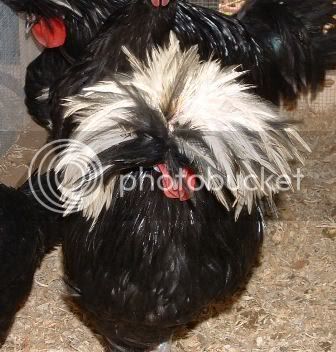 Wish I knew when I picked up Samson (your silver blue Ameracauna rooster), I may have been persuaded! By the way Samson should be a Daddy this week some time! Can't wait to see how they turn out.
Frazzled

I wasn't thinking of finding him a home then, but he wasn't getting beat up so much then, either!!

Oh I definitely want to see pics of those babies! Very cool!

Chickenpea, I did PM you! Email me (link in my profile or from my web site) if you did not recieve it. I wonder if there is something wonky going on w/PMs between us, you said that I did not get back to you sometime in the past, but I really don't remember getting a PM from you before so I wonder if I did not get it??

Hello! I'm not sure if you are still looking for a home for your polish chicken, but I am VERY interested. I have 3 beautiful polish hens that need a boy.

They actually have one, but he has been very aggressive lately and I too am looking for a good home for him. I just bought him from a chicken show here in MD a few weeks ago. He won first place in his breed--gorgeous! I can send pics if you know of anyone or if anyone knows of anyone who might be interested. He lets us pick him up, but is very aggressive(i.e-tries to kick and bite if we get near his hens). I have another polish rooster in a seperate pen and he's a big lover boy! Anyhow, if anyone's interested in pics, shoot me an e-mail at [email protected].
God bless,
Tracey
Last edited: Apr 3, 2008
You must log in or register to reply here.

J
What can I expect from a frizzle x polish?