Free ranging Peafowl, and a few other quick questions.

A friend of mine recently gave me a white Peacock, Romeo. He had been attacking her grand child and she either had to shoot him or give him away, and I certainly didn't want him shot so I took him in. Anyway, after carrying him in my lap all the way home and after getting quite a few odd looks from the other drivers I got him home safely without too many issues. Anyway, he had been locked up with some of my chickens for about a week and I decided to let him out (bad idea)...first thing he did was walk into the milkcow's pen and they both started chasing (actually more like trying to kill) him. Then he went to the backyard and jumped on the fence and preened himself for a few minutes then jumped down and ran into the pasture behind the house. He then trys to jump the fence into the cow pasture, but I quickly cut him off and he runs back into the front pasture by the front yard and then takes off to our neighbor's property! I ran as fast as I can and cut him off and I quickly call my sister in the house and tell her to get everybody out to the front pasture to help me catch Romeo! Now, we have 6 people trying to catch Romeo, he then runs back to the barn and goes around behind it, and then decides to take off into the field behind the barn...so I again jump the fence and run after him and then after alot of screaming, waving on hands etc I herd him back to the barn and I praying he goes into the coop again...my prayers were answered because he ran right back in and boy did I shut that door in a hurry.

Okay, now you know my free ranging story which leads to my first question: Will I ever be able to free range him without him running off by himself? He didn't even stay with the chickens or anything. If he had a peahen would be be more likely to stick around, or would they both just wonder off together? I have 4 peachicks in the brooder, but most of them are only around 2-3 weeks old and he is their father.

I moved the chickens that were in with him to a different pen and put my Coronation and Light Sussex in with him and he must have thought they the hens were peahens because he tryed to mate them.

Anways, it'll be a few months before he can have any peafowl companions so how long does he have to be locked up until he knows where "Home" is? The barn is the only place there is water & food out, so I thought he might go back for water, but I mean he was running off to who knows where, so I don't have a clue?


Also, do peafowl scratch like chickens do? I haven't seen him scratch hardly at all, but then again I haven't had him for more than 3 weeks. I wanted to have them in the front yard, but my mother has some very high dollar flowers that she doesn't want scratched up. We also have a garden right behind the front yard, will they eat the flowers/plants/fruit/bugs etc...or will they leave it along?

Sorry for my long questions.

They need to be kept up for 6-8 weeks before you can trun them loose.

They dont scratch. He should not bother the flowers. A female around would help. I got a male and female. I free range mine.
They have tp be kept up for 6-8 weeks. Good Luck.

I don't free range, but I would keep him locked up until he has friends. Personally I think the longer you wait to free range the better chance you will have of him sticking around. Also just curious how old is he?

They might peck at the plants and eat a few flowers, depending on how much they like them but with the whole yard to peck at chances are they will be sampling so much stuff like grass and things that your prized plants will probably not see much damage...For example lots of botanical gardens have huge groups of free-range peafowl and still have beautiful plants. I think they are pretty good garden birds unless you have them penned and are trying to have a garden in the pen with them...That is hard...

When they scratch they don't mess up the grass. They mainly scratch through leaves looking for bugs and the only time they might scratch up the grass is to make a dust bath. They make a depression in the ground and then lay in it and flap around in the dirt or sand to help clean their feathers and get rid of extra oils on their feathers.

Here is one of my peahens taking a dust bath: 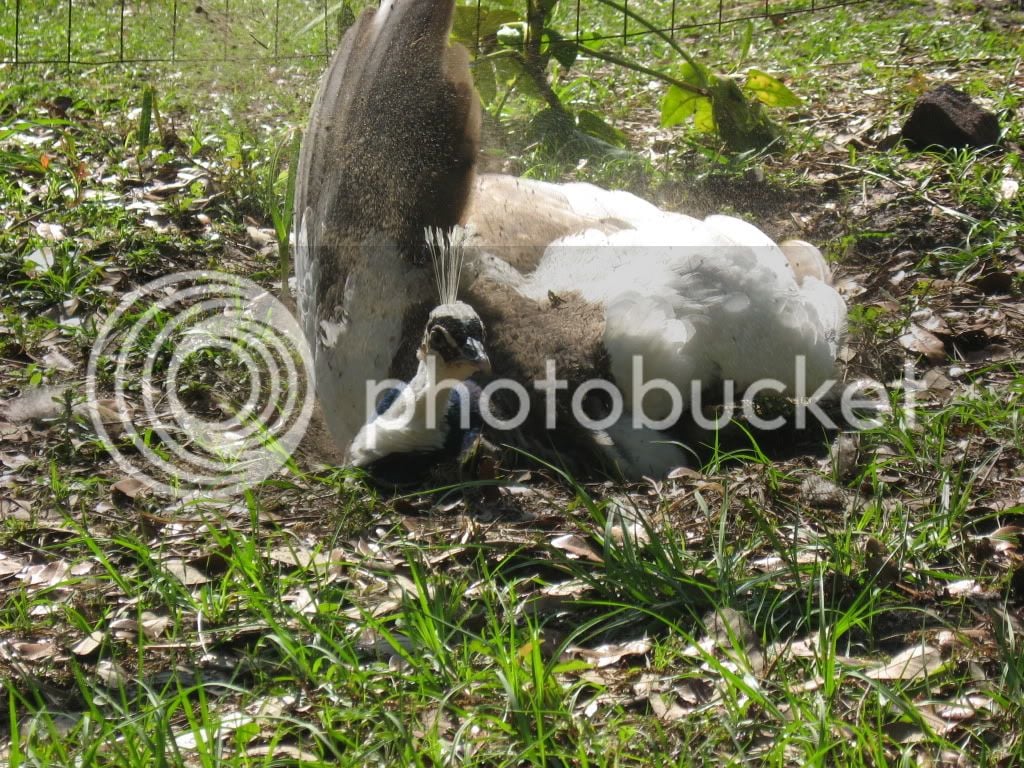 Glenmar - Thank you so much. So I should be able to free range him by the end of June, or the first of July.

C&Rman - He is three years old. My friend's daughter-in-law found him a few winters ago in her backyard and he was so cold he couldn't walk and then she gave him to her mother-in-law (my friend) because he was attacking her 19 m/o son. Then one day when her daughter-in-law came over with her grandson Romeo flogged him and got some of his eye tissue and she couldn't keep him.

MinxFox - Thank you my dear, I will 'def keep that in mind.

P
Has anyone had an interspecies coop with peafowl?