I’ll have more pictures for you guys later today!!

For now, quick update...
Gil is doing great- she’s been really loud at 6 am on the dot because Luke started letting her out of her pen while he gets ready for work while I’m trying to sleep. The days he doesn’t let her out now, she knows and she’s grumpy and wakes up the whole neighborhood. Thanks Gil. Other than that, she’s happy!!


Mini’s- they’re doing great!! I don’t have them interact too much with people. Really only once in a while, other than that I stand or sit near them but I try to let them do them. They’ll let me pick them up but don’t enjoy it. I want to get them a little more comfortable with me but I’m trying to keep a line so that they’re still ducks in case Gil spends a night or so with them In the future. When they were real little they followed me but they just out grew that. They’re cute though!! The babies are living outside. We’re having highs of 78 and lows at night of 55 right now so the temp is okay for them. They just got out of the baby pool in the pictures and are drying.


My question is, they smell bad, what can I do to make them smell better? Water bath isn’t helping!!!! Gil never smelled like this. It’s not their poop, it’s just a weird musky bird smell. 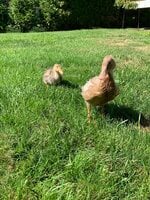 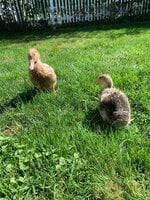 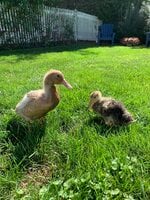 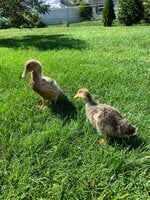 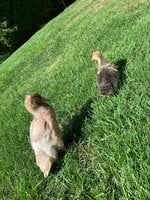 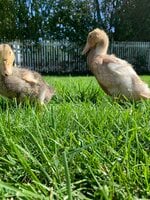 Hi kkrista! What breed are they? So cute! Does Gil love being with them?

DuckyDonna said:
Hi kkrista! What breed are they? So cute! Does Gil love being with them?
Click to expand...

Hello! So for the big one the guesses were, Saxony, Rouen, Buff and Fawn and White Runner. The little ones guesses were welsh harlequin or silver appleyard. Now that they're bigger, the smaller one definitely looks like a silver appleyard to me. For the bigger one since the fawn color is coming in, I am going to guess fawn and white runner. Gil get's along with them great, I am just trying to watch and understand now if it's super exciting for her or a dread.

All seems well so far though!

They are adorable! Gil really needed some friends. She'll never forget your her mama!

Soo sweet krista you did a good thing!

Try and keep us updated!

A
What is this duck behavior?

A
Do ducklings chirp for their owner’s attention?