Give me your guesses oh Chicken Gurus!

I got Rainbow Layers from MM. There wasn't much Rainbow going on in the box. Ah, well. What do think we have?? 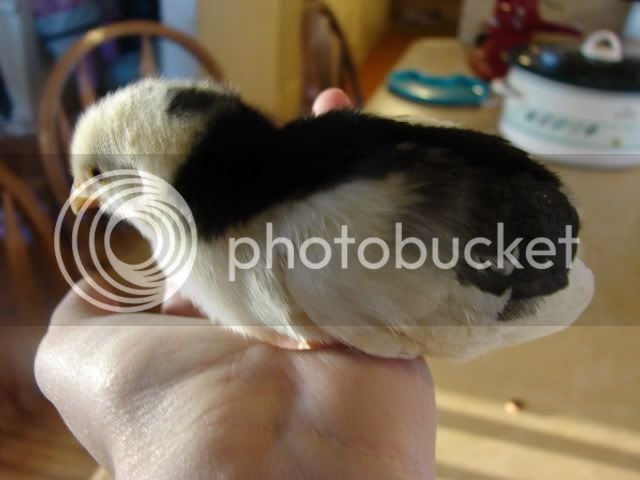 Mystery Chick #1. About a week and a half old. Quite a bit of yellow with a black back. She's feathering out yellow w/ black as well. Legs are orange. Orange beak and nostrils. Very friendly. 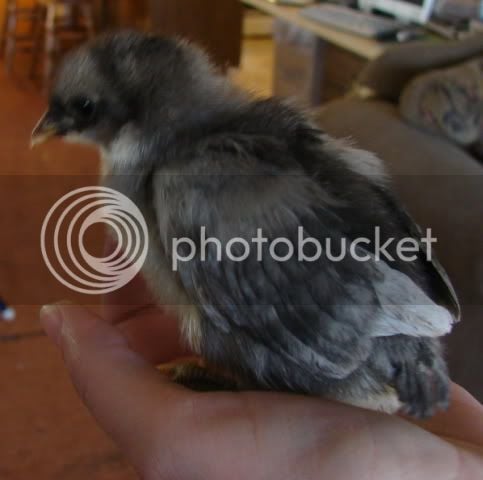 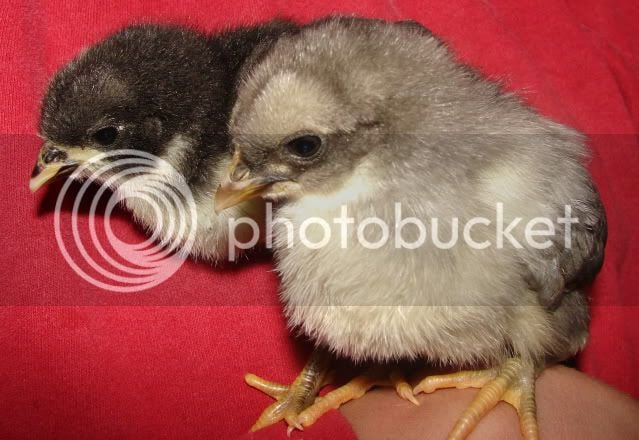 Mystery Chick #2. Dark gray lady w/ some lighter spots. Feathering in quite grey. A bit flighty. Legs are greyish. Beak is grey and yellow. Shown on the right next to a slightly younger black star baby. Their markings are very similar, but the mystery chick is much lighter in color. 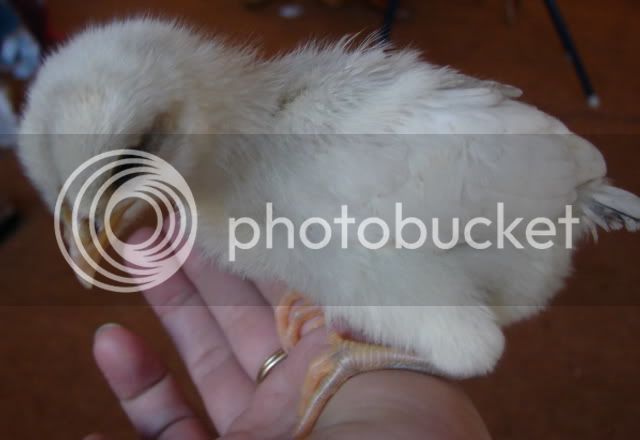 Mystery Chick #3. This one came pretty solidly light grey, but is feathering in quite light. Whiteish, but you can still see the grey hint there. She has grey on her legs, but a pretty yellow beak. On the smaller side. 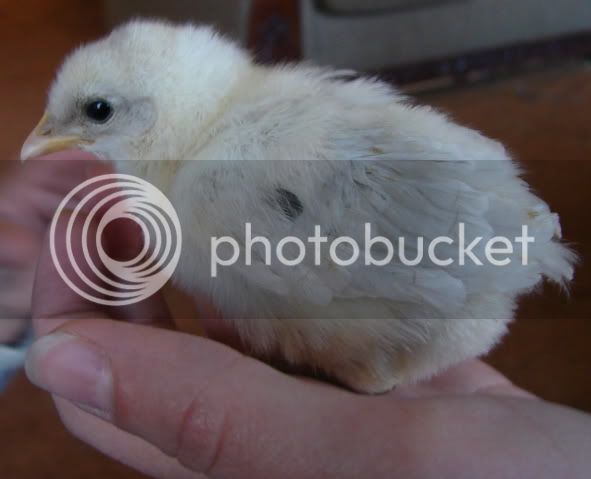 Mystery Chick #5. This look similar to number 3, but they are definitely distinguishably different. She came mostly yellow, with a grey spot on her head and some grey around her eyes. Greyish feet and beak. She is feathering in quite grey, which is the opposite of the one above. LOL Also smaller in size. 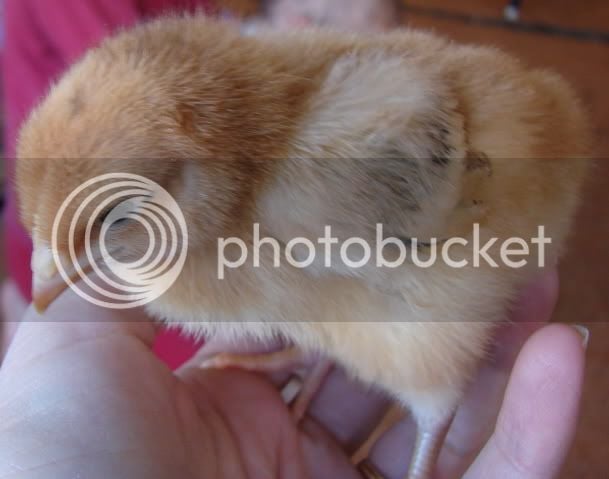 Mystery Chick #6. This little guy we got St. run from the feed store to assort our assortment. LOL He's growing quite quickly. Almost as big as my older ones already. RIR? Red Star hen? This one's feathering in a bit mottled. Red w/ brown. Despite the little eyeliner spot, this looks much too plain to be an Ameracauna. 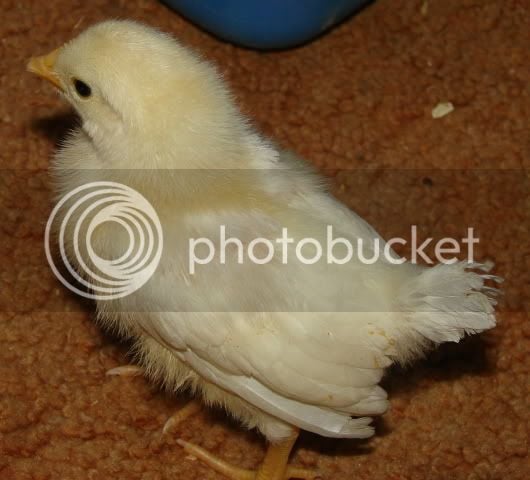 Mystery Chick(s) #7. We have 22 that pretty much look all the same. I keep trying to convince myself that there are several breeds among these, but they're really very homogenous. Seem to be feathering in quite white. Orange legs, orange beaks. I'm hoping these aren't all Leghorns, as we already have 9 adults in the hen house. This pic shows it yellower than it really is. The colors are closer in the pic below. 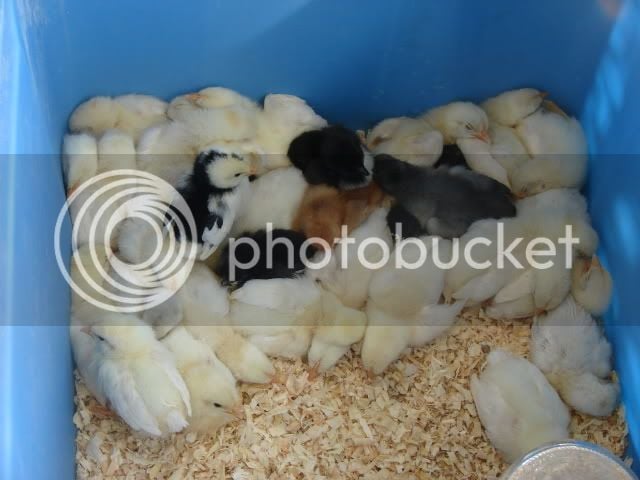 And, the whole clutch sleeping. The blacks and red in the middle didn't come in the mix. I added them a few days later to make up for my dissapointment in the lack of a mix. LOL 3 are St. Run Australorps, one a black star pullet and the last the red mystery from above.

Thanks for your guesses!

Man, I am disappointed the lack of rainbow, too! Did you contact the hatchery? I would send them a photo of the lack of assortment.

I am sorry, I don't know what your chicks are, but I sure think they are cute. That does look like a bunch of leghorns in there with them.
Last edited: Mar 24, 2009

#1 is an Ancona and you got a bunch of leghorns or white rocks.

I'm guessing your others are Andalusians and a Production Red.

In my "Rainbow Assortment" last year I got about 14 Barred rocks, 7 of which died in the first three days.

In my "pullet" assortment I got:

NOt a white layer nor an ameraucana in the bunch. ALL Brown layers. Imagine that rainbow.
Last edited: Mar 24, 2009

Thanks for the input. Anyone else on the others??

YK, I thought about contacting them, but from what I've read, they're not exactly responsive to complaints.

I think I'm just going to feel lucky that they all came healthy and alive, and have stayed that way. If all the yellows are the same, I really *should* complain however. They promise "at least 5 breeds", and with the free rare that has to be one of the 4 distinct ones, they only included 4 breeds. 22 of one and 1 of three others.

I was thinking that one of the greyish ones might be Blue Andalusian.

Do the White Rocks lay brown eggs? If so, I'll hope they're those. LOL I already have a lot of white layers.
Last edited: Mar 24, 2009

Did you order from McMurray? If so, we ordered the same "assortment"--although I think in our batch, we got a lot more color going on--still can't figure out what we have (I've got postings going on too trying to decipher what the girls are

!!) , but certainly not all of one type-The order said around 5 of each type...hmmmmm..maybe they can't count so well!!-McMurray isn't very 'customer friendly' from the experience we had--I don't know if I'd order there again--lots of customer service junk--On the bright side, your chicks look very healthy!! Good luck with your new little ones

gosh, I am so sorry to hear about bad experiences from McMurray. Mine was so wonderful! My order was easy, accurate, came early, came with an extra of each of two of my rare breeds that I ordered (besides the free rare chick), they were all healthy and alive and when I called customer service with questions about the breeds and splitting my order with someone, etc, they were very friendly, knowledgeable, and helpful. I think it's worth it to at least try to call them and maybe kill them with kindness - "Thank you so much for my chicks, they have arrived and are darling and healthy! I am just curious about my assortment - how many different breeds should I have if I ordered the XX assortment? 22 out of 25 of my chicks look identical to me right now and I just want to make sure that I got the right order. Could that be correct that they are mostly the same breed?"

Something like that is worth a try in my mind... I do think they want to make people happy because they know word spreads like wildfire on the internet. Just my thoughts.

LOL Those are perfect words. I think I'll take them verbatim.

So, what might they offer for restitution if I'm successful?? I don't need more chickens. LOL With the 25 layers in there, plus my 16 already in the house, that's 41. That's gonna be a lot of eggs.

That I couldn't tell you, unfortunately. I have read many different stories on the internet. Some people have gotten nothing. Some have gotten replacement (morE) chicks, and some have gotten partial refunds for various issues. This is the first I know of a not-assorted assortment, so it's tough to say if there's much they can do. I just think it's worth trying. If they are not nice or helpful, it will make me sad, but at least you can say you tried and maybe they'll work a little something out with you, who knows. It'll probably depend partially who you get on the phone at the time. Good luck to you!
You must log in or register to reply here.
Share:
Reddit Pinterest Tumblr WhatsApp Email Link