((Posted on BYH but more thoughts would be useful...))

I'm trying to make a very simple goat pen for what will be two very small goats (with both Nigi Dwarf and Pygmy in the mix) I'm trying to get either two does or one doe and one wether from the lady. They aren't even born yet but I want to make sure I get them a fitting pen - I don't care if it's pretty - it just needs to contain them. I determined it would be a 12x10ft or 15x10ft space once fenced. 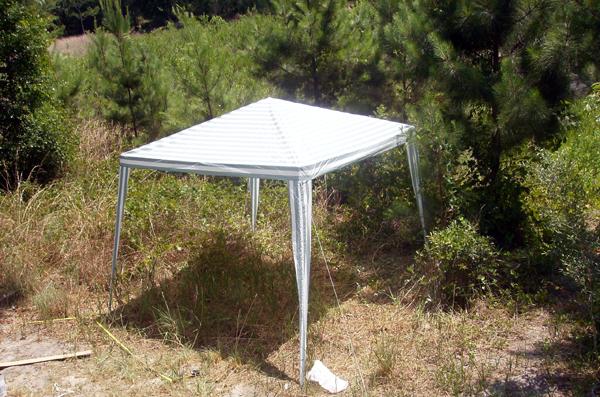 That is the area I decided to construct it. That shade has a footing of 10x10ft and I plan to build their pen so the legs of it are outside of the pen (so they wont damage or get hurt on it) likely strapped to the actual fence posts. I will be making them a 4x4x4ft shelter following this design;

My questions are; are these sizes appropriate for two likely very small goats and what is a good option I can use for fencing that will keep them in? I REALLY don't want to do an electric fence if I can avoid it. If you have a fence that works for your goats please post pictures or descriptions. I don't care if it's beautiful as long as it keeps them contained.


and based on things I was asked on BYH;
I live in Florida - no winters really and overheating or getting wet in the summertime are the real concerns - I will be placing their shelter under the shade for double protection from the rain.

They will not be in this pen full time but a lot of the time. I am hoping to tie them out in areas with the most brush or even attempt to walk them in some regards since my 2 acres are not fenced. I'd let them loose with supervision - but only if you think that's realistic or if the goats would bolt all willy nilly.
Last edited: Jun 17, 2010

That sounds rather small... How much time will they spend in it? My chickens get a bigger pen than that. My dog yard of which my dogs are about the size of goats is 150x200' and I'd consider that about the right size for a 2-3 small goats to spend all day, every day in.

For something that small I'd just use tall hog panels or cattle panels if you can find some with smaller openings. You might have to cut them though to get that exact size. I think the cattle panels I used on the dog yard came in 12-20' sections. It's very heavy gauge wire that won't collapse from critters standing or leaning on it and the hog panels should be small enough they can't get their heads in it. Most cattle panels have large enough openings for heads to get stuck. You probably wouldn't need anything else to hold it up except to tie the panels together.

Option B which would be cheaper is to stick a tpost at each corner and throw some field fencing around it.

If they are gonna spend a lot of time in there, that sounds kinda small. I have 5 nigis in a 10x50 feet and I hate that they are in such a small inclosure. I do let them out everyday for about an hour but still am waiting on some more money to fence larger area.

The quickest and easiest fencing option would be combo panels. I say combo instead of cattle because when they are still little they will go through the squares on cattle panels. Combo panels are smaller on the bottom like hog panels. They are 16 ft long, 5 feet high, and they keep my nigerian and pygmy in, though I had one once that could jump that high and taught another to jump too. I sold the jumper and the other stopped. Buy 4 panels and you have an instant 16 x 16 pen. Easily movable, easily put up. We love them.

Yes, truth be told, buy a big roll of fencing and fence you two acres and let them roam! Field fence will keep them in and you can get 330 ft pretty reasonable. Oh, and as to roaming, if they are bottle babies, you can probably let them out when you are out to watch them. We used to when we only had 2-3. Now we have 7, it is a bit much, but they never left the yard, just wandered around munching.

Well. The only reason it isn't fenced is Bears and deer apparently migrate through my property and are so dead set on continuing to do so that they knock it down and trample it. I get one section up and it's gone in a season. >< They aren't causing other issues - they haven't even bothered my rabbits let alone my hens... but they apparently cross through my property for one reason or another - I think to get to the lake that is on one side of me... how do you compete with their need to drink?

At this point I'm not even sure where my property line is anymore. My markers are all missing

Buuut that's a discussion for another time... I can't find combo panels when I search google all I get is rather interesting but definitely not what you're describing, "combo" because they come with a gate on them and appear to be for rodeos...

as for tposting - http://www.americanlivestock.com/pc-296-179-step-in-poly-post.aspx do you think that would work? I MIGHT go electric since the more I google the more people only seem to use that with goats.. I dunno.. the pen is just too far for an electrical outlet and I'd really like if I could find one that ran on battery - even though I highly doubt it would last

It's just solar I hear likes to fail a lot and before it's fixed you have goats on a highway :'( I could make the area bigger I think if I could find one I trusted.

The goats will EAT the canvas that is on the legs and will most likely headbutt the posts. Make it secure.

Quote:Why do people keep not reading the part about the legs of that being OUTSIDE the pen?

No offence it's just despite me stating that from the get-go people keep saying that.

I have two goats and use the livestock welded wire 16' panels also. I have a pen 16'x32' and secured them to t-posts and overlapped one panel onto another enough to work in a small gate. A while back I acquired a horned goat (long horns), she would stick her head through the squares and sometimes get stuck and I'd have to manipulate her head to the right angle to get her un-stuck. She finally learned the right angle to get her own head out. That's the only downside I've experienced with the panels which dehorning can help avoid this. I don't know though but the goats you're getting may not grow long enough horns to be a problem with this since they are a small breed. Their shelter (similar to the one in the link you posted) is a homemade house made of plywood & 2x4's, 4'high, 4'wide, 4 long, it's 3 1/2 sided with the open side facing away from the wind direction so that it won't blow over.

The only hesitation I would have about the shade your using is with it holding up the winds. If you want to just provide shade, consider setting some 4x4 posts in the ground, frame out the top for support to cover with a piece of plywood, that way the wind won't carry it away or a falling branch won't ruin the cover. Then you could attach your fencing to the posts as well if wanted.

When I let my goats out, they follow me everywhere and have to be into anything I'm trying to do or run to get in front of me and stop so I can fall over them. Usually they stay within about 30 feet of me and scream if I've left their sight. They don't bolt anywhere but towards me.

Quote:<3 Ohohoho the mental image of goat tripping is just adorable but makes me feel a LOT better because my hens are the same way - which is why I'm able to let /them/ roam all willy nilly. I don't need to even watch my hens because they barely get farther than my car and they only go that far because my car is their favourite shade. Anytime I go out there they flock at me in hopes of treats.

Here's hoping cheerios and sliced apples are enough to get my goats interested in me. XD And no wont be letting the goats wander like that. Heck. They'd be house goats if I thought I could get away with it - they house train easier than dogs I hear.

These goats will NOT be disbudded either if I can help it. I actually like how horns look on a goat - not to mention it gets hot here in FL and the horns act as cooling mechanisms. Plus, I know several people who keep their goats horned out here - several even intact males and the horns have never caused injury to people or other goats(in fact, it gave them a handy thing to grab onto while goat wrestling). Buuut they are pygmy and dwarf crosses - when I look them up their horns do get adequately sized but not massive. So there's a possibility they would get stuck in such paneling. But, I'm not too worried since when I look up these panels - most of what I can find are done in SQUARES and not just straight lines.

Would that work? If so I'll order four of them and some T-posts(Or the posts I linked earlier)

I actually think I can do 16x16' np if I place three legs of the shade outside it then surround the fourth in HW cloth or nailed a "box" of wood around it? The space the shade is sitting in is about 16x20ft really - I'm just trying to put space so those trees can grow and so I can put up a sound barrier if the sound starts to bother the homes on the other side of the pond.

EDIT: Actually, Instead of Tposts do you think actual set wooden posts might be better? Four of them set in cement at each corner of the 16ft panels with a 5th at the front so I can make a door/gate?
Last edited: Jun 19, 2010
You must log in or register to reply here.
Share:
Reddit Pinterest Tumblr WhatsApp Email Link