I am so drained from this ordeal with my MM chicks. I know that there are people out there who have chicks that have shown signs of AE but are hanging on and/or recovering.

I want to hear from everyone about some of the "good fight" that's going on. I have 10 (out of the 18 to survive shiping and the first 48 hours) affected birds, all in varying degrees. BUT, they are hangin on! They are fighting this with all their might! I am PROUD of them...and I won't cull them unless I KNOW that it is the best thing to do for THEM!

My weakest, and first to show symptoms, is Chick Jr. He has gotten worse in the past few days, but continues to fight. He is my hero. I try and make sure he gets water and vitamins, and HE makes sure he eats...and boy can he eat!

Here is a picture of him. He is such a trooper.

I want to hear about all the little chicks out there that are fighting this! 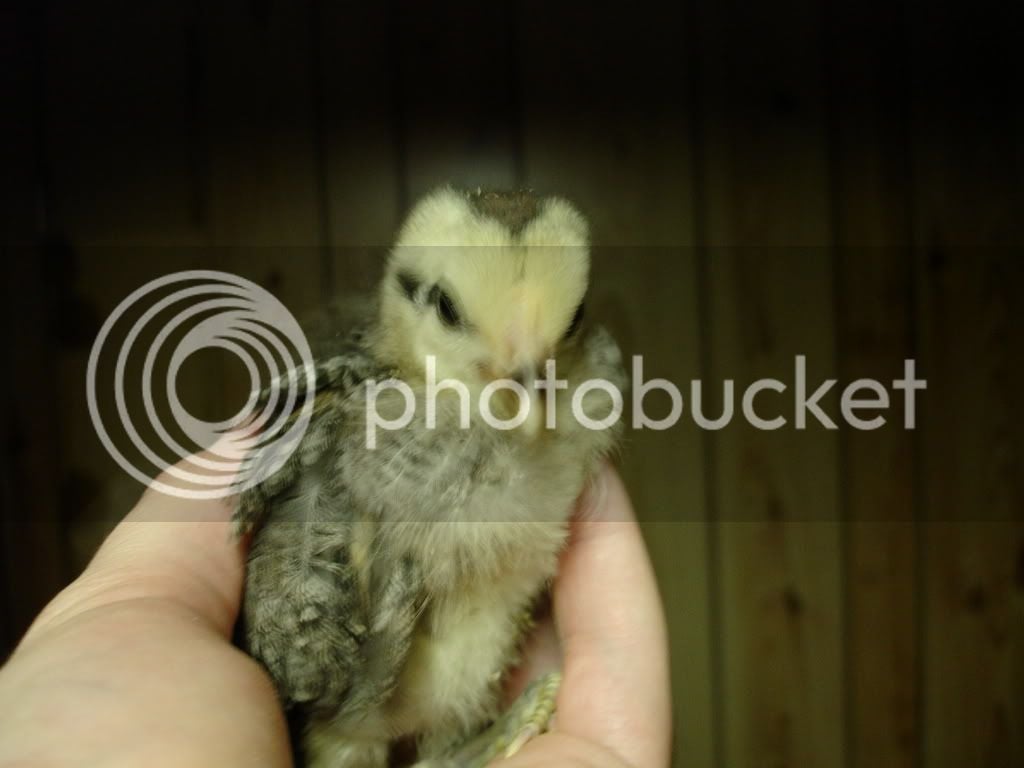 Well, Tard, the Partridge Cochin, I should really take a picture of it btw, but anywho, at it's worst, it was laying on it side with it's eyes closed, barely breathing. I have never seen a chick look so dead and not be dead. Four weeks later, it's got minor bobble head, acts like the village idiot and is super cute. As long as it doesn't grow up to be something that belongs in Pet Cemetery, I am going to keep it around. It's starting to grow again after 4 weeks of no growth! My EEs are looking up too. I even have a buff rock that can kinda? walk! Well, walking might be wishful thinking walking, but never-the-less, it can stand sort of...

I think you can almost tell if they aren't going to make it. The ones that won't eat, and especially won't drink are having a tough time and would require someone to care for them every couple hours with force feeding and drinking. That's what most of mine are. Probably 1 in 5 is recovering. I've lost about 40 so far, and I am guessing there's another 20 or so that are going to need to go.

There is hope, it's dim, but it is there. And, it all depends on where you are at mentally and morally with this whole thing. It has worn me out and I am happy with the decision to cull the permanently damaged. It wouldn't be a fair life for them anyway.

Well, here is a fighter story for you.... our first affected was a Delaware. Her name is LingLing as our 8 year old daughter said she needed a special name after all she has been through. LingLing got sick at 10 days old, could not walk.... would not eat...barely moved. We put her in a smaller brooder with our other affected ones (2 Golden Polish, 1 Silver Polish, 2 Buttercups, 1 RC Brown Leghorn and 1 GL Wyandotte). Lots of handfeeding and watering; vits and Terramycin (per MMH).... not much change for about 4 days. Then some improvement.... a little more walking and eating unassisted; except LingLing. The others improved enough that we had to place them back in the large brooder...I know that may not have been a good idea but we had no other choice as we only have one room that we can use for the brooders. Poor LingLing was getting run over... but still hanging on. More handfeeding, babying, etc.... she is now 3.5 weeks old and is still the size of a one week old chickie! But she is walking and doing pretty well... she actually scratched at her feed yesterday! So, she may be tiny but she is a tenacious little thing and we will keep taking care of her. The others have finally stopped walking like tin soldiers and are growing so I have hope for LingLing.

We have not had any official diagnosis here.... our symptoms were simply similar to what others have been going through. Also, our birds are "just" for pleasure so it does not affect us if some don't lay/breed well or at all.

I ordered 30 Silver Grey Dorkings. 3 were dead in the box, they were squashed. 7 more died within the first three days. They were fine the first day, and then two by two they just became lethargic, wouldn't move, eat, drink etc... I had a few with splayed legs, but the rest seemed fine. At exactly 2 weeks of age the symptoms started again. I have four that are very small, and I thought for sure two of them were going to die. (Just laying there, can't walk, no eating, drinking, vibrating heads) But within 2 days they're up walking around and eating, drinking on their own. And so it continues. In my smaller birds, the symptoms seem more severe. In my larger birds, they walk around a bit stiff, and maybe hang one wing a bit funny for a few days but they do recover. So, my whole flock is infected basically, but they are all pulling through. And once they pull through they act absolutely normal. So, I'm finding it hard to cull because they pull through, grow, and act as little chicks should. We had decided we would breed for immunity, and keep only the strongest adults for a breeding flock. But now there seems to be some conflicting info as to whether or not they actualy pass their immunity onto the chicks. We also are going to be getting more chicks, ducklings and turkey poults this year and have to consider their health as well. If we do decide to keep the flock, I imagine we will be dealing with this issue for the lives of our flocks.

Here is a story about Angel (white EE)...talk about fighter. At two week old the AE started to show it's ugly head. Not knowing what it was I had already lost four and Angel was it's next target. At two weeks she had a huge crop that just wouldn't go down and continued to get huge. I think maybe with the AE her digestive tract was off. When it reacted the size of a golf ball I knew I had to take action, so with shaking hands and tearing eyes I cut her open and cleaned her out. I rapped her up in a bandage and prayed to God to not let her suffer. The next morning I woke up to her eating and drinking. She has been fighting the AE ever since. She has bad head tremors and trouble walking but is getting better. Then she got a cold at 4 weeks but pulled through and now she is turning five weeks and I am returning her to the coop tonight. She is a quarter of the size she should be but she's a fighter and even if she doesn't make it, she has taught me so much already about not loosing hope.

We have lost 8 to date out of 27. Four are still showing signs but are doing well and going back to the brooder tonight including my Angel.

* Hey, you guys-- The chicks are obviously not the only fighters here. Sounds like none of them would have made it without all of YOU fighting for them.

Just thought I would update my story. Chick Jr. is still hanging in there. His head tremors are still pretty bad and he has trouble walking, but he manages as well as he can.

I have not lost a single chick since the first week. My AE chicks are now about 6 weeks old and they started showing symptoms around two weeks old. That means that they have been fighting this thing for four weeks. I hope that there is some improvement soon. The rest of the chicks will be ready to go out to the coop soon.

Hope there are some stories of recovery out there!

I'm so glad you asked people to post their progress. I am just at a loss about what to do!

I have eight chickies out of 29 who contracted AE (six Speckled Sussex and two Light Brahmas). Of those, one of the Light Brahmas has recovered enough to go into the outdoor coop with all the healthy babies. He is still wobbly and smaller than the 'normal' ones, but I think he'll make it.

As for the other seven sick babies, I just don't know what to do! : ( They are all in a brooder box in the house still, and are all able to feed themselves, although it is very difficult for them to scoot/flop/flap themselves to the food tray. Most of them have trouble drinking out of the waterer by themselves so I faithfully have been giving them water out of a tablespoon six or seven times a day, every day, for the past three weeks. It is really exhausting, but I just keep clinging to the hope that they'll recover enough.....

Four of them have really bad legs at this point. Splayed, twisted, curled, you name it. Those four can't walk at all. The other three have 'normal' legs, except that their legs are still very skinny. But then again, their whole bodies are very small and skinny still. Sigh. Three of them have pretty bad tremors. The other ones only get tremors when they're stressed or after they've been trying to walk.

I have been binding their legs with bandaids and trying to straigten their feet out with splints. That's pretty time consuming and tiring too.

Every day, I go back and forth with myself about whether it would be more humane to cull them or to keep trying. I am at a loss. This is a tough situation. It's made worse, as I'm sure you all know, because you get really attached to the ones that you've nursed so diligently. On top of that, they all seem very mentally alert and bright. Their little eyes shine and when I put them out on the grass for a few minutes here and there, they peck and try to scratch and behave normally except that they can't walk properly. It would be easier for me if they seemed lethargic or in pain, but on the contrary, they are perky little birds.

My husband is ready to cull them. I change my mind about it hourly. I wish I had a crystal ball so that I'd know what the future holds for them.

Good luck to everyone who's making this difficult decision.

FeatherFluff, I just read your post and though I can't contribute to the MM saga, I just thought I let you know my son has a Deleware named "Ming Ming" we got last summer.

Just had to chime that in, sorry to get off subject.

Since writing my last post here, we've since had to cull 5. We will probably have to cull 2 more. Our littlest 2 recovered, and then became ill again 2 weeks later. It just gets to a point where you know they'll never walk properly again. It becomes a question of quality of life. I just have to say this has been the hardest thing I've had to go through as an animal owner, my heart goes out to you barefoot, and others in this situation.

I
Tiny Week-Old Chick, how best to help?