Got 4 new squeakers, and one may be sick--please advise

I started with 6 squeakers, but lost two on their first release, leaving me with only four, so I wanted to get a few more to start my loft. I picked up the four new squeakers today (one silver bar, one red bar, one blue bar and one blue check) from a guy who is a pretty serious racer, he let me take my pick, so I know he wasn't purposely selling me a sick bird (and all the others look great), but when I got home and put them in the loft with my headlamp on I noticed in the light this one (we'll call her #8, because that's the band I put on her) had some eye issue, and then I also noticed she happened to be the bird that didn't put up much of a stink when I banded them (she was somewhat docile, maybe slightly lethargic). She was blinking her eye and keeping it half shut, and in the flashlight beam it looked cloudy. Her other eye is fine, and she is energetic enough to scoot away from me when I try to pick her up, but unlike the others, when I do pick her up she rests comfortably and lets me pet her and soothe her.

My mom is a vet (not an avian vet) but it's too late to call her, so I took matters into my own hands because I wanted to get to treating her ASAP. I applied Neomycin and Polymyxin ointment, an all purpose anti-biotic / anti-fungal for the eye that can be used for humans, dogs and cats, so I took the risk and used it on her assuming it was ok, but I did find one bird website that indicated it can be used for birds. I took her out of the loft in case it was contagious, and have her in a small carry kennel in my garage. I gave her a tiny bit of grit and peanuts, and water, and I treated her water with apple cider vinegar at a concentration of about 1%, and cut a tiny piece of garlic and put it in the water as well.

I am not unhappy I picked this bird, as she is probably in the best hands she could be in, rather than in the loft in the numbers, not being paid particular attention to.

Any suggestions are appreciated!

Take some terramycin ointment on your thumb , rub your thumb and your index finger together. Then place your thumb and circle the birds eyelid gently. The bird will close her eye automatically. Since it's not advanced. Do it once and leave it alone. If it gets worse then you may have to repeat it. Don't mix a lot of stuff and put it in her eye. Just get the ointment. It's not uncommon

you said:
'I picked up the four new squeakers today (one silver bar, one red bar, one blue bar and one blue check'

LamarshFish said:
I applied Neomycin and Polymyxin ointment, an all purpose anti-biotic
Click to expand...

I was going to suggest that same isolation precaution and solution only marketed under a different brand name.

I spoke with my mom this morning. She said the ointment I used will help with everything EXCEPT an ulceric lesion, which if that is the case it will make it worse since it has steroids in it. She also said she doesn't like giving young animals steroids. That said, she said one dose won't be a problem. She is giving me anti-biotic drops today. I will ask her about the terramycin as well.

She is isolated in my garage in a small kennel. I sort of feel bad she has to be alone, but I think it's for the best until I see improvement. I put food and grit in the bottom saucer part of a waterer, but I found her laying in it this morning seemingly thinking it was a nest bowl maybe lol? Anyways, since she laid in it and got some of the food outside of it, I can't tell if she has been eating or not. I put some peanuts in with the food, so I would imagine if those disappear it means she is eating....

Here is a picture of her eye: 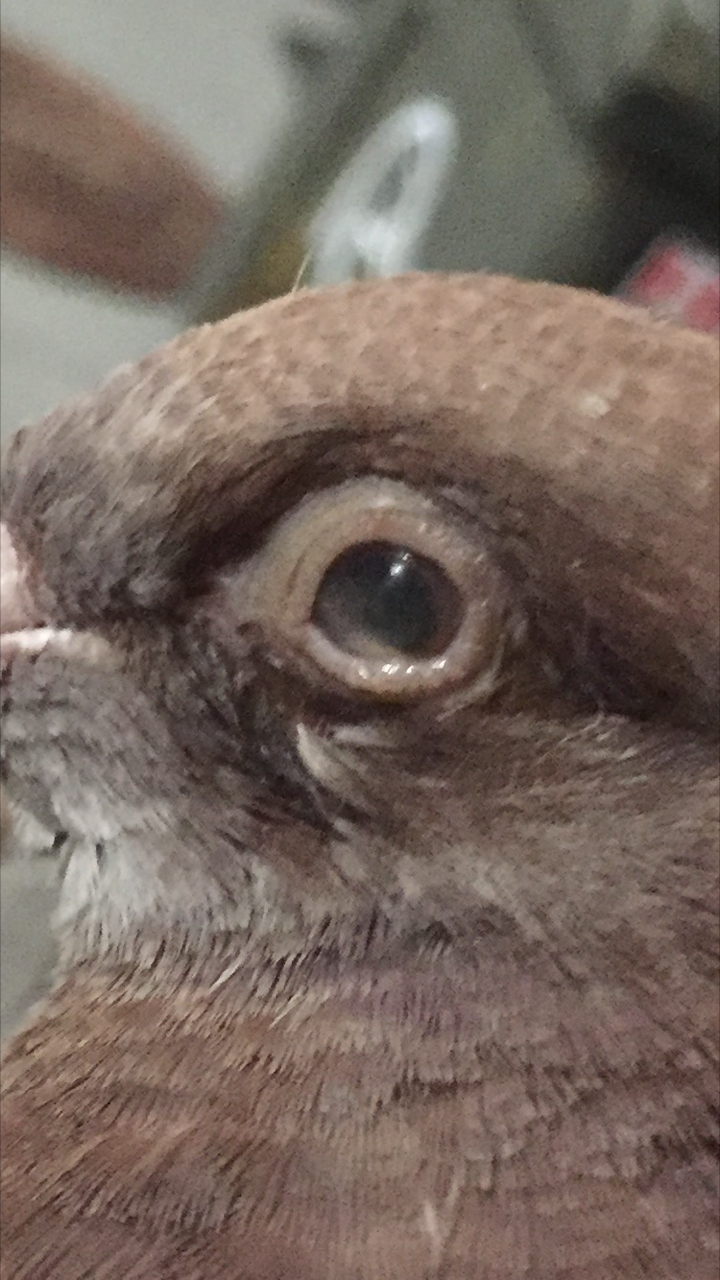 Another concern of mine is that her chest bone seems sharper and more protruding than the others, as if she maybe hasn't eaten well? I am wondering why that is.

Good that you are able to check her condition. Its important you are aware of that in evaluating her health. Can you post a pict of her whole self

So fortunate to have a Vet in the family!!!

I understand looking at droppings can be helpful to determine health status, so here is a pic, but keep in mind this was after being transported from loft to loft, so there was some stress.... 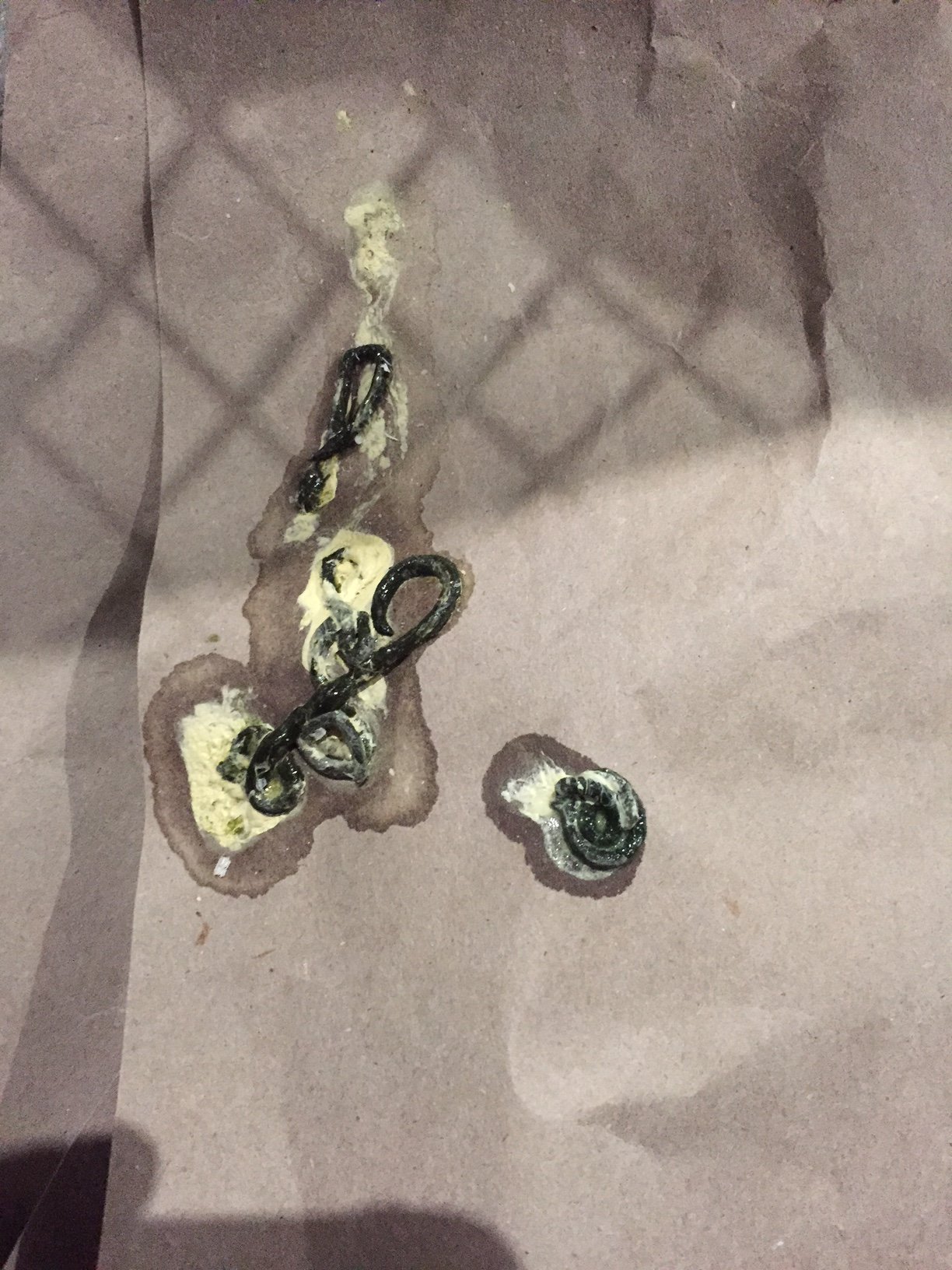 LamarshFish said:
Another concern of mine is that her chest bone seems sharper and more protruding than the others, as if she maybe hasn't eaten well? I am wondering why that is.
Click to expand...

I will post pictures of her and the rest of my new ones after work. I meant to do it this morning but I was too caught up with dealing with changing her cage with fresh paper for her to sit on (it had poop on it), and making sure she had a good food and water situation, etc.

Very fortunate that my mom is a vet. I have learned so much from her over the years, I can do a lot myself, but it certainly is nice, and saves money. My sister-in-law (my brother's wife) is also a vet, so I have two : )
Last edited: Jun 7, 2017

LamarshFish said:
I understand looking at droppings can be helpful to determine health status, so here is a pic, but keep in mind this was after being transported from loft to loft, so there was some stress....

Barn and Hokum will know better but it looks within normal range to me. I would try to fatten her up, ... of course you are already doing that!