Got our new babies this week / Also some questions re: baby chick care

Well we got them in Wednesday - 6 beautiful new babies - 1 banty Brahma (the rest are all standard size), 1 Golden Laced Wynadotte, 1 Silver Laced Wynadotte, 1 Ameraucana, 1 sweet little Red Star, and 1 Barred Rock. The day after we received these in our lone older hen (that survived the attack on the coop last month) started crowing (like a roo)!

They were hatched monday and are growing sooo well.

Day 1 (Wednesday): We put them in their cage which was taped together cardboard boxes..... Umm that didn't work so well - by the time I got home from work the sides were falling down and at one point (after I got home) our little Easter Egger got stuck to the duct tape. I pulled her off but she lost some fuzz. My dad cut up some pegboard to match this other piece of plywood he had lying around and we put it around the bottom half of the cardboard - ripped all the top half off. That way we have the cardboard (which we filled w/ pine shavings) and can just burn the cardboard once the girls go outside permanently.

Also was super scared when I came home because banty was lying face down in the middle of the brooder. I thought she was dead!! However, all it took was one poke and she took off more active than could be! 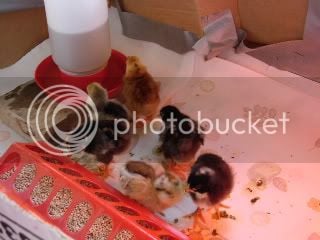 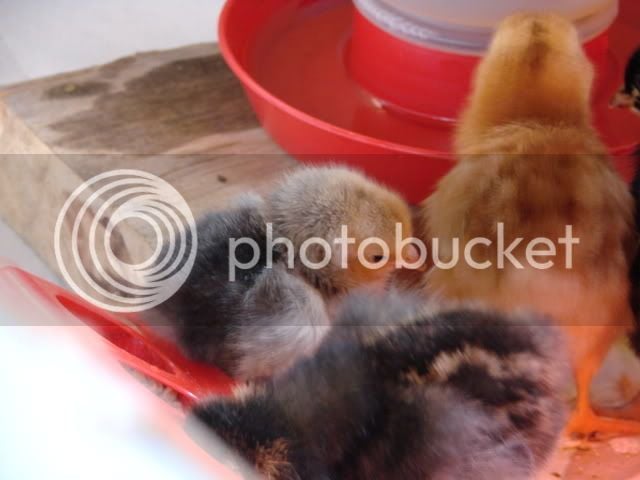 Day 2 (Thursday): getting bigger and bigger - my mom also came by to see the new babies. 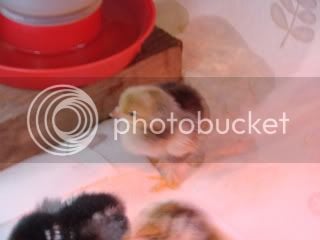 Day 3 (Friday): Wing feathers on all but one of the babies have more than half way feathered out. The BR has asserted herself as the group "lookout" and is trying to assert herself as the head of the pecking order. The banty is feisty as all get out and doesn't take anything off any of the others! The Ameraucana will now sit in our hand even once we lower her to the brooder floor.

Day 4 (Sat): EE is getting little tiny feathers on her tail. The Red Star will eat chick starter crumbles out of my hand.

So far only one incident of pasty butt - that was on the Barred Rock and it was only partial vent coverage. They do have some diarrhea. They have yet to poo in their food and only poo'd once in their water (today!).

1) We have pine shavings down and some paper towels down on top of it. The EE & Red Star are leading an evil coup to tear the paper towels back or hold them up as we change out the towels... the EE also will pull the towels back to get at the pine shavings too. They peck at the shavings and scratch at them - they also play keep away with some scraps. (We do take these scraps away). I'm worried they may eat it and get impacted crops? Is this a legitimate concern at this point? They seem to spend more time chasing whoever has whatever scrap gets tossed up.

2) At what point can we take the paper towels up so they can dig etc? They really liked it when I threw some food down today so they can peck at it and play. The Red Star and Barred Rock laid down in the food and wallowed it??

3) When can we start giving them treats? Like boiled egg etc? They are pecking at each others beaks on occasion but (I figured this was just normal chick behavior from some other posts I've read but have also seen some where they suggest treats)

Thanks for all the help

you can take the paper towels out now.they know where the feed is so they are eating that.you can give them treats in 3wks.but before you do that you may want to give emm chick gritt.so they can grind up the treats you give emm.

Scratching and digging for food is how chickens survive, it's a strong instinct and they do it from the day they're born. Don't try to stop it, you can't.

You can give them some hard boiled egg yolk if you want, mash it and cool it first, maybe some mealworms. Don't give too many treats even though it's fun, they should fill up on their chick feed.

Such cute babies! Don't worry so much. Sounds like everything is great. Enjoy the little ones!

On our latest group of chcikies we used paper towel for only 3 days then just the shavings and they were fine. Yours should be also! You have some cuties.