What an interesting Halloween my birds had!
First, let me start by explaining the layout of their enclosure. The main structure is a 12 X 12 dog pen, with a roof kit and hardware cloth covering the bottom 48 inches and door. Layered under that is chicken wire that covers the entire structure, including the roof. The roof tarp has been placed over the chicken wire. Cinder blocks surround the outside, and the ground inside has been covered with patio bricks, minus a sand pit in the middle. Their rather tall hen house is raised off the floor with bricks; the roof sits about five feet off the ground. I shut the enclosure after dark when they go inside, and I've never had anything get inside and get to them in the five years since I've built it. On mild evenings, my five younger girls (11 months to 3 years old) roost on the roof of the hen house, while my 9 year old hen and 3 year old roo sleep inside the hen house.
Well, the morning of Nov 1st, I went out there to open the door so they could forage and romp for the day, and the roof of the hen house was covered in BLOOD! Seriously, it looked like a crime scene! It was concentrated mainly on the peak of the roof, but there was so much of it, that it actually ran down the roof and dripped on the bricks below. I had never seen so much blood! Aside from where it dripped down, there was no blood anywhere else in the enclosure. At first I thought Coccidia, but there was no bloody stool, just straight blood, and every single one of my birds is acting JUST FINE! All eating, all happy and robust, nice pink combs and wattles, not a sign of anything amiss! I suspected maybe an injury as well, but aside from where they tracked the blood on their feet pacing back and forth on the roof of the hen house, there is not a single speck of blood anywhere on any of them, and none of them are limping or showing any sign of discomfort.
Just to be safe I broke out the gloves and bleach, and disinfected and hosed out the entire enclosure, and they've been on Corid since that day. Better a needlessly medicated bird than a dead one, amirite? But I'm still baffled. What on EARTH could have happened? It occurs to me that it wouldn't be impossible for a mouse or small snake to get in, and if it did, my birds would not hesitate to go after it. I've even seen them go after full-grown copperheads, pecking relentlessly after them and chasing them off my property. But again, there was no blood on the floor other than where it dripped off the roof, and there's no sign of a carcass(or pieces of a carcass) anywhere else. Could they seriously have snatched it up, took it to their roost, and then tore it apart Freddy Kreuger style and swallowed the whole thing?? Has anyone here ever had anything like this happen with their flock?

Are your birds molting? New blood feathers if broken can bleed. Also check combs for any type of peck. Those bleed profusely too as the birds will often shake blood everywhere. I have seen it too a time or two, but have never determined the reason. Another option is a toenail, but that probably wouldn't get blood on the roof.

petspoiler said:
It was concentrated mainly on the peak of the roof, but there was so much of it, that it actually ran down the roof and dripped on the bricks below. I had never seen so much blood!
Click to expand...

So this was the morning after Halloween? Is your coop secure from humans?
It sounds to me like you had some juvenile prank played on you. Others have recently posted about hearing chanting in the forest near them and feared that their chickens would be stolen for some sort of sacrifice. I guess a juvenile prank would be better than your chickens being taken for some sickos sacrifice on Halloween.

I vote for a broken blood feather. My cockatiel used to get night frights, and thrashing around she would break blood feathers a lot. It seriously looked like a crime scene every time. Check their wings.

This is their enclosure, right after I built it. The rocks in the middle have been replaced with sand(they love scratching in the sand and it's much easier to clean poop out of it with a litter scoop) and two PVC perches have been put in, but other than that the layout is still the same. I don't feed them in here; it's much easier to keep the vermin out and keep it clean when they eat outside. 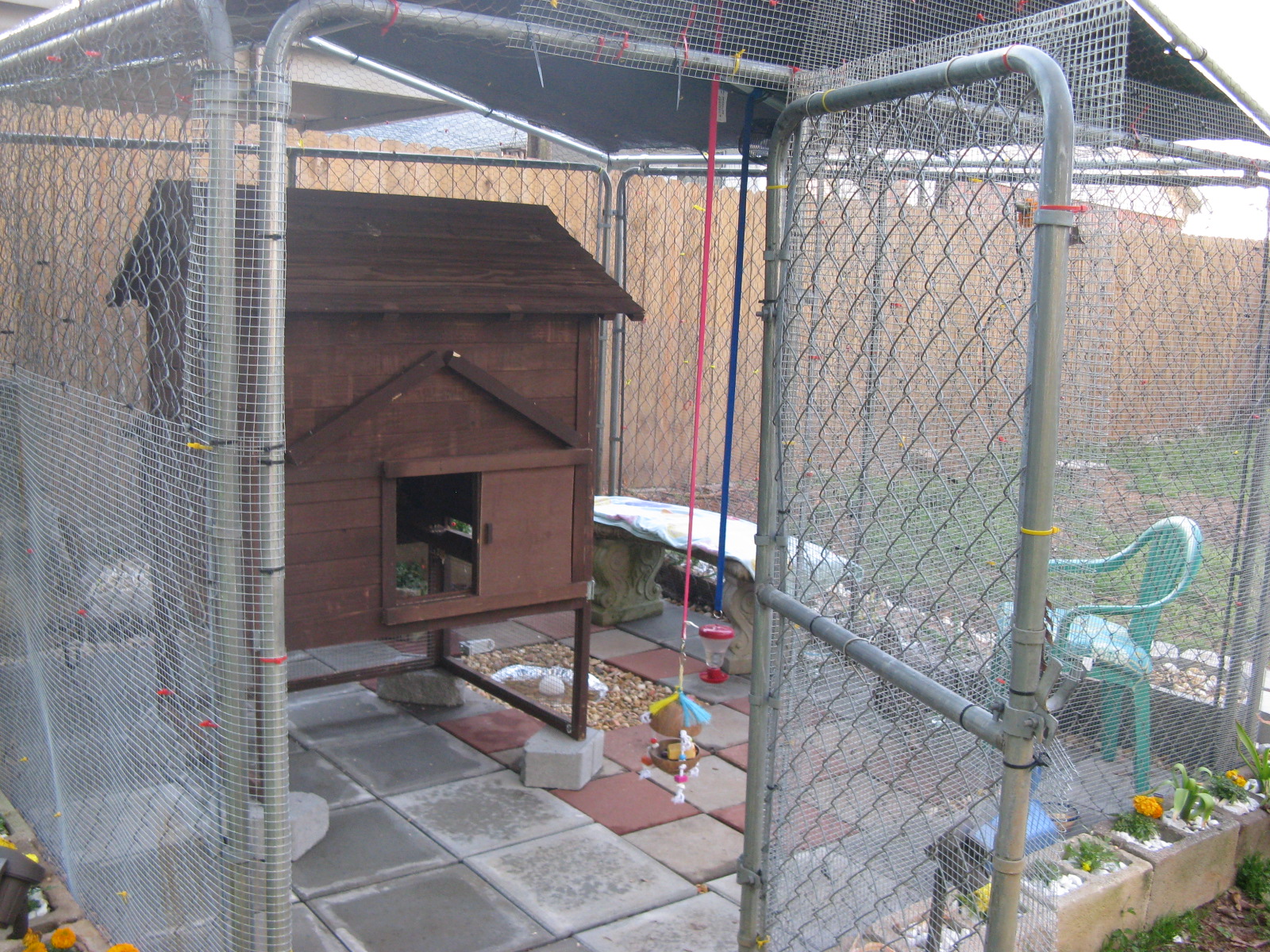 If they all seem fine, then it may be that someone has decided to pull a prank on you. Not funny. Secure your coop with locks, and maybe get a trail cam as well, that will help track any predators.
It sure is strange.

Farmer jr said:
If it was a prank then put locks on the coop that have keys I have to do that with my show chickens so they don't get stolen I almost had that happen
Click to expand...

Possible, I suppose. But that's the last thing I'd expect. Where would someone get the blood to do that? It didn't come from my birds. And how would they do that in the dark without getting blood on the birds or traumatizing them? They had a brush with a coyote one evening at dusk before one of my pit bulls came to the rescue and chased it off. No one even got injured, but they hid for two days and wouldn't come out. Then there's the question of what's the motive for going to all that trouble? They'd also have to scale the privacy fence or find a way to defeat the gates that only unlatch from the inside, again, in the dark, without my pit bulls hearing them. It just seems like it would be easier and more effective for a prankster to throw the blood on my car in the driveway, or egg it...

Looks secure! Can anything slip under that gate?

V
I put down a duck, i hope I did the right thing

Hen bleeding from vent and coughing