We got our first egg yesterday. I was surprised to find a small green egg when I went and checked the nest boxes. After so many months of not finding anything. Well, I was really surprised that it was green. Because the chicken that we know to be an EE, I didn't think was ready to lay yet. Here are both eggs, the one on the bottom was from yesterday, the slightly longer and darker egg is from today. 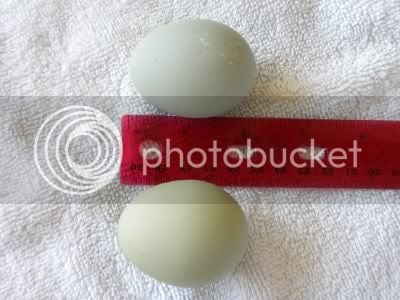 Here is the bird that I thought might have laid it. 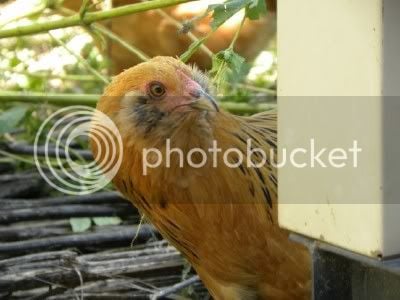 Except that she has shown no signs of being ready.

This girl is the new Woman! 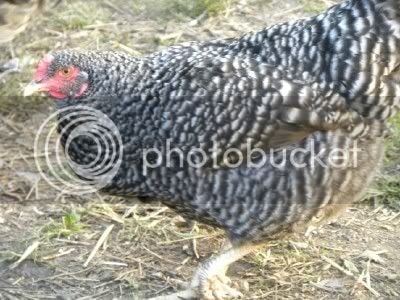 I heard the egg song from inside my house since I had the back door open. So I ran out to the coop and the only one in the nesting boxes was this one we call Zebra. She has been showing all the signs since Sunday. She has been throwing hay behind her back everywhere, we saw her do the deed with the rooster with no objections, she was getting in the nesting box on Sunday and singing the egg song. So on Monday is when she laid her first egg. I waited until she got off and sang her song and the rooster joined in with her. So cute. There was another green egg!

Now for the others to catch on! One down, three to go.

They are cute eggs!

So that means you have a Barred EE - lucky you!!

Well, this afternoon we went out to the coop to see if there were anymore eggs yet and my ds found another small green egg but it was out in the run/yard, not in the nesting box??? So Hmmm? I wonder who that one came from.

How old is your gold EE? Her comb definitely looks really pale (hard to tell from a picture though), but I was really surprised by one of my EEs - I'd always read that they were slow to mature, but my runt of the flock EE started cranking out eggs almost every day at about 19-20 weeks and her comb was small and barely red. If I hadn't seen her lay them, I wouldn't have believed it. I was sure I'd be waiting 'til November for her to start laying.

Yeah I'll butt in here with my two cents.

Second - I'm pretty sure it is actually your Easter Egger. Zebra looks to have a single comb, a normal hatchery-type Barred Rock body, and normal leg color. Plus her comb is just as "ready" as the EE. The EE actually looks pretty ready. My Blue and Blue Wheaten Ameraucanas have just as small and pale of a comb and are just now laying.

Also, a lot of hens like to make their egg song for someone else who laid.

Okay, it is officially and totally confirmed that my Zebra (Barred Rock) is laying the green eggs. I heard the egg song this morning, so went running out there, and nothing was going on. So I fed them some bread and then Zebra headed to a nesting box. She jumped out after awhile and pecked around, throwing straw over her shoulder. Jumped back in the nesting box and after about 15-20 minutes laid a green egg. This time she didn't do the chicken song after laying, and she was panting a little.

No other chickens were anywhere near her or the nesting boxes and I stayed in the yard with a chair so I could make sure it was her. haha (Hope the neighbors aren't watching the crazy chicken lady!!).

So now the only question is who laid the second egg on Wednesday? It looks just like the others. Is there any way possible she could have laid 2 hard shelled eggs within less than 8 hours?

How exceedingly cool that you got a barred rock that lays pretty minty-green eggs! Just today, my EE started squatting, so we're hoping to know what color eggs we get from her in the next couple of days.

I like your barred rock's name, too... Zebra. Very appropriate. Congrats on the eggs!

C
Who laid this egg?