I have 9 guineas and I think at least 3 are males. So far I have no problems with agression. They are about 3 months old. I've read on here that they are mighty tasty and was wondering if I should be culling a couple of the males. I really don't want them breeding my chickens (they haven't tried - yet) nor do I want them to fight each other.

They are so cute. I loved it when they were little and would sleep flat on their tummies with their legs stuck out behind them.

I'm not positive, but I think guineas 'pair up' with one mate. But like I said, I am not sure. The guineas I have that are old enough to be sexed are 3 males and 2 females.

We started out with a mix, but with this and that tragedy, we ended up with 4 male Guineas and they lived harmoniously together without a problem, until the new puppy we got took out 2 more

We renamed one Guinea Rambo, because he was the last Guinea standing (the other one was close to gone from the dog - but he pulled through)

Male guineas will not mate with your chickens....But a rooster will mate with guinea hens. I know I have a cross I call a chi-guinea and it is UGLY> Flighty like a guinea and chirps like a chicken.
I have several males in my little herd and not much fighting going on. They usually dash up to each other and then chase some but no real fights.....
I don't know if they "pair up" cause they look so much alike who can tell

Quote:My males usually end up running the females off...guess they need their 'guy' time! I have heard that they do pair-up, but like you said, who can tell?

Shelly is right - they are monogamous, according to feathersite. Great.

Glad to know they won't fight. I guess they're talkers, not fighters.

My 30 - 50 birds depending one what time of the year it was just ran around in one pen together. Never had a problem with fighting and fertility was great. And I know everyone has seen chickens do "the deed" but I've never caught a guinea so I don't know how monogamous they are. 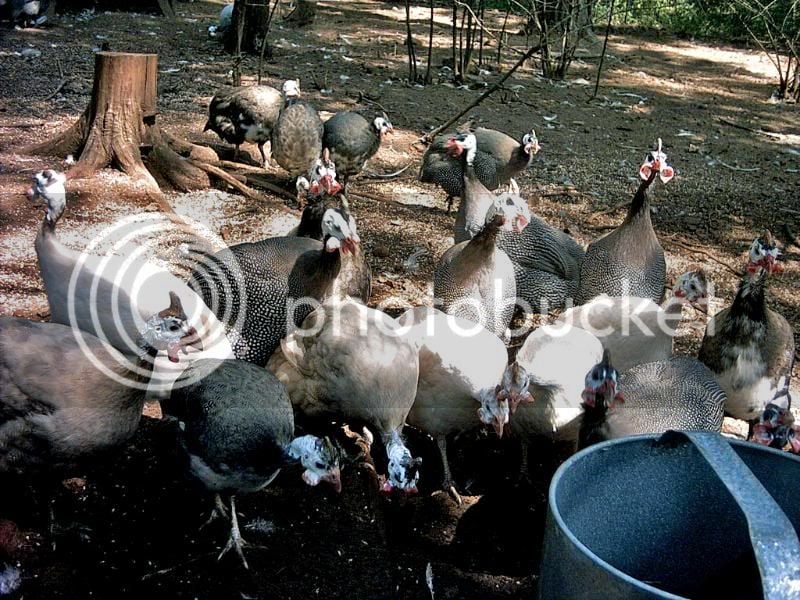 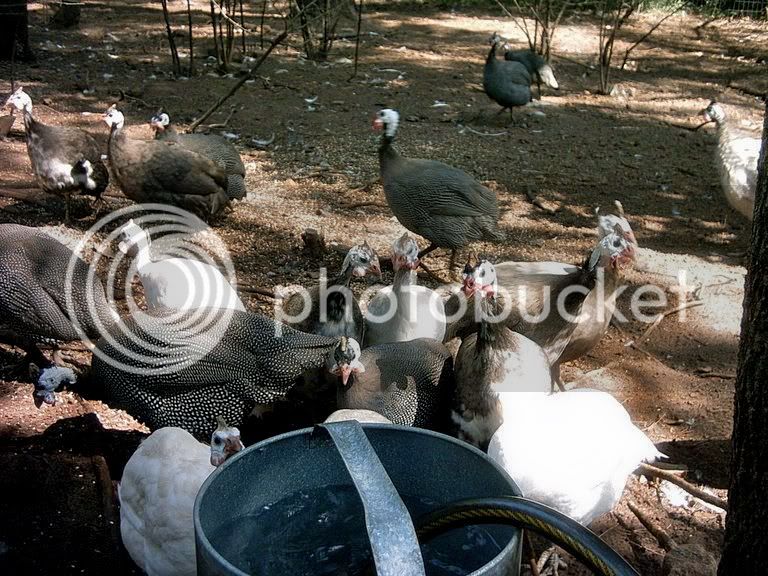 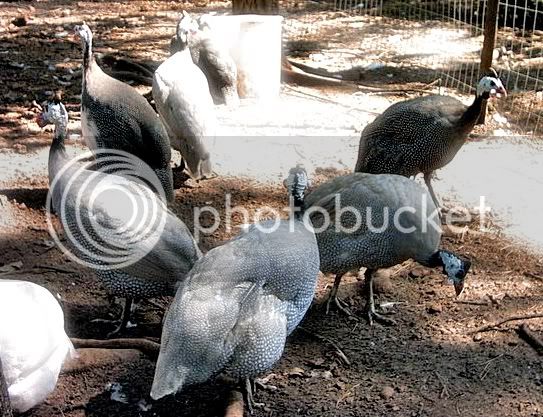 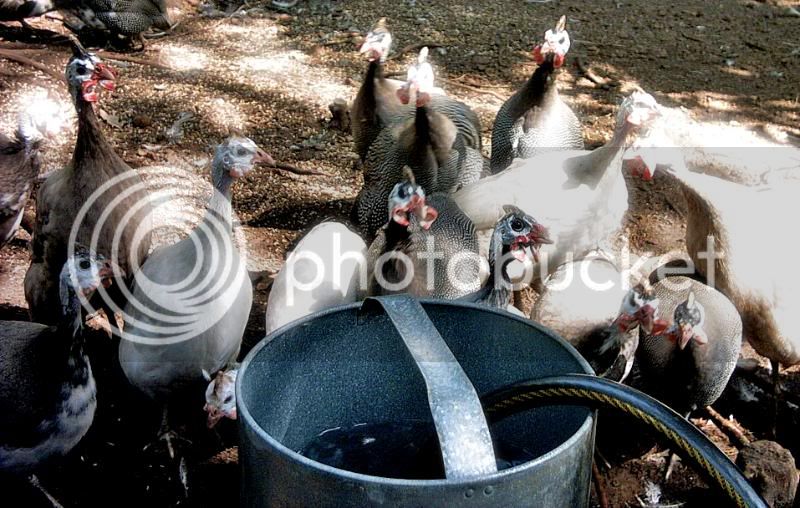 A neighbor of mine has probably like 80 guineas, all are completely free range(no coop) in all sorts of colors on about 8 acres.

She tells me (and I did notice) that 'off season' they basically mix freely but come breeding season, the males get a bit more 'antsy' and many do form what look like pairs.. that is, a male and female staying with each other sort of separately from other guineas most of the time. Does not seem to be 100% monogamous though.. There always were some males that for whatever reason, formed very obvious 'harems' of a single male with two or more females, forming a clique and staying well away from any other guineas. One male in particular(a pied slate) always has 5-7 hens in his exclusive harem every spring.

I got a pair from her(only guineas I have), they seem to get along pretty well most of the time although this spring when the hen was laying, he did act rather aggressive towards her(repeatedly "dived" or darted straight at her at high speed) to the point she seemed scared of him and he became extremely aggressive towards all other birds- even the mature tom turkeys were bullied by him. My neighbor thinks he needed more hens.. no idea if that would have 'settled' him down some or not.

If there are an even number of males and females, they will form pairs. If there are more females, the males will take several for himself. I had two males and two females and I knew who was mated with who. They're different than chickens in almost every way, except that they're fowl.

One great thing about guineas is you can have a lot of males and don't have the fighting you get with chickens. During the breeding season you will have a lot of running around but no real fighting. In fact, the males are quieter than the females.
You must log in or register to reply here.
Share:
Reddit Pinterest Tumblr WhatsApp Email Link