I came home to a wonderful surprise last night. My sweet girl Stella had her babies! Four adorable little pigs and no two look the same. Of course I knew she was pregnant I just had no idea when she was due. Last night was also my cage cleaning, and switching night. I got a new cage for her and the babies. Well new to me, but it came with two female guinea pigs in it. So I had to trade cages. I was going to wait so as not to stress her since she had already had them. But she was not concerned with me at all and actually tried to climb out onto my hand when I was trying to get Piggy out. There is where my question lies. Piggy. My boar. He can't be left on his own for very long or he gets depressed (refuses to eat, lethargic and squeals all the time) this is even with his cage next to hers. Last time I had him in a small area of her cage (much to small) so he could be near her but not breed her. This worked and he ate, though they still cried for each other and would lay on opposite sides of the wire to sleep so they where near each other. But there was just not enough room for them. So after two months (from when she had her first litter) I let them back together. So now hear we are again. I have decided to get/make a huge C&C cage, with a smaller one to the side. I hope to be able to introduce one of these male babies to piggy at 3 weeks and keep those two on one side, with Stella, Panda and Lola on the other, with the cubes in between so they can't breed but can lay together see each other. What would your opinion be on this? Right now piggy is in a temporary pen in my entry way, made with the exercise pen we used for our puppies.

Here are the pictures! They are so cute, I am hoping one of the tan and white ones, preferably the one with the stripe is a boy so I can keep it. Also included some of all the guinea pigs, and some of their cages (which I realize are way to small, that is why I am ordering a C&C kit, unless someone knows where I can buy the cubes etc myself?) They do get some time out everyday to run the exercise pen. Or they did till I had to put Piggy in it last night!

The two new girls- The white and brown one is Lola, the black and white one is Panda - We got them three weeks ago off of Craigslist from a family that was moving. They are very tame and nice, except to piggy, Lola tries to attack him all the time, even through the exercise pen wire when they I divide it in half for them. 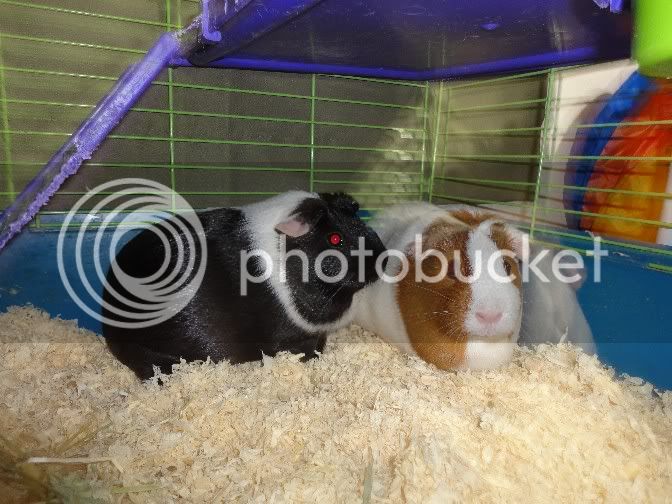 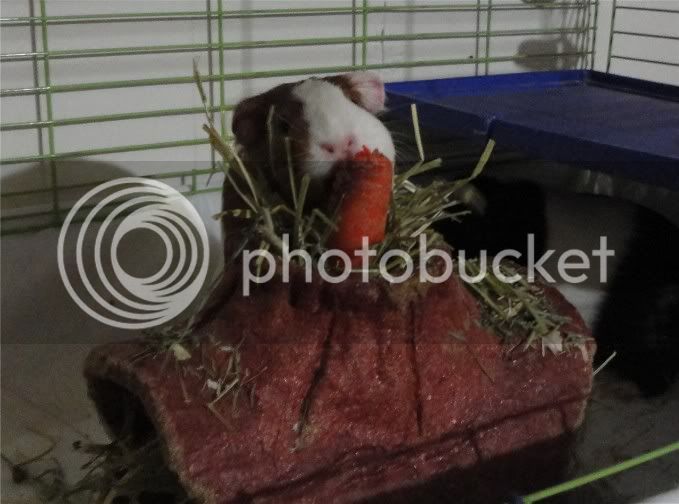 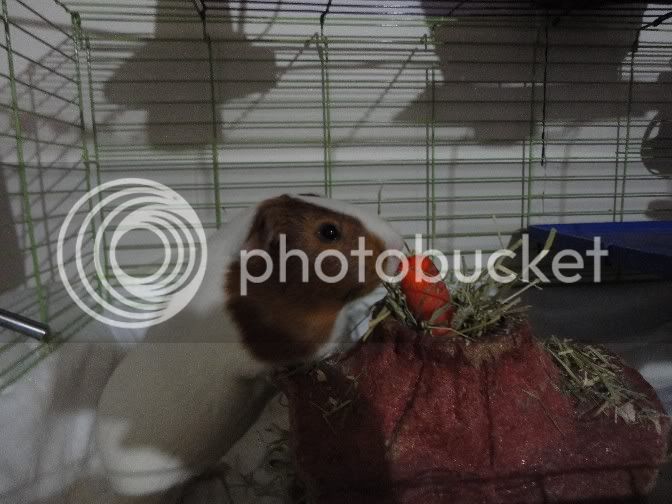 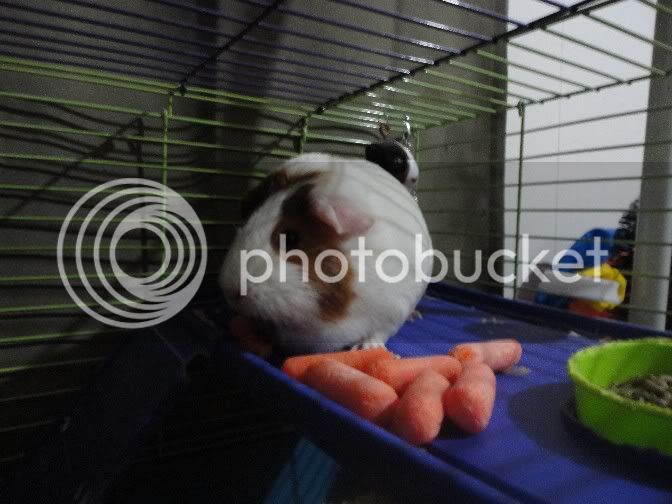 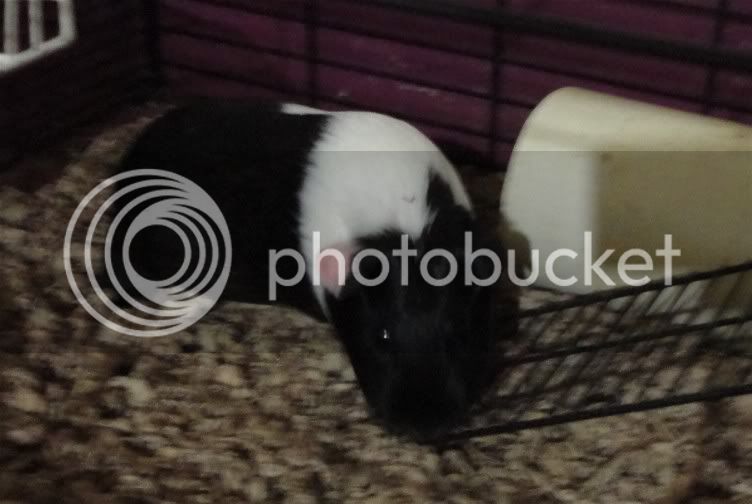 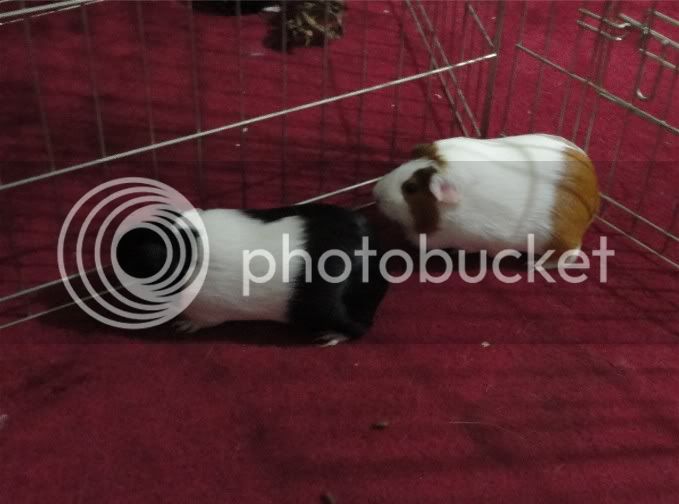 Piggy is escaping in this picture, he pushed the gate part of the pen out and was trying to climb in with the movies! 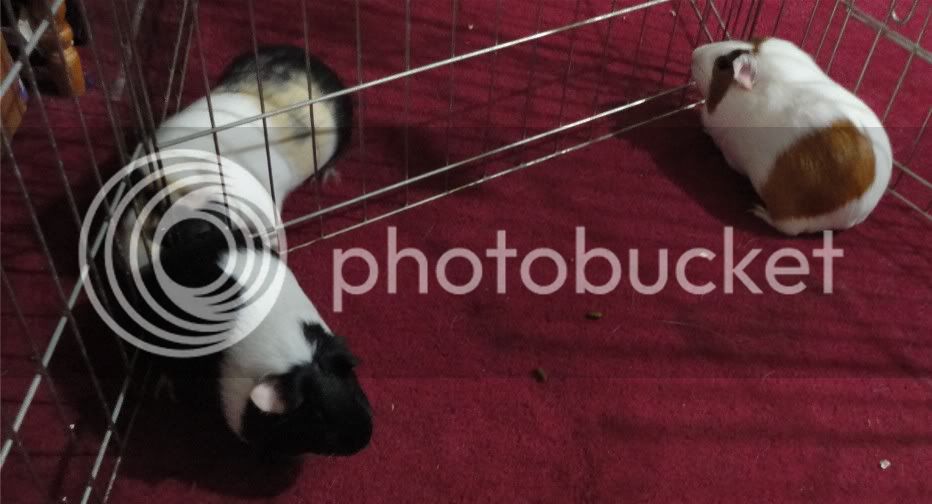 The daddy-My first pig - Piggy - I love this guy, he is very sweet, but not friendly, he would much rather not be picked up and has always got this look like " Oh My gosh, they are going to eat me" We have had him for almost two years now, so you would think he would of realized we aren't but he still seems concerned! 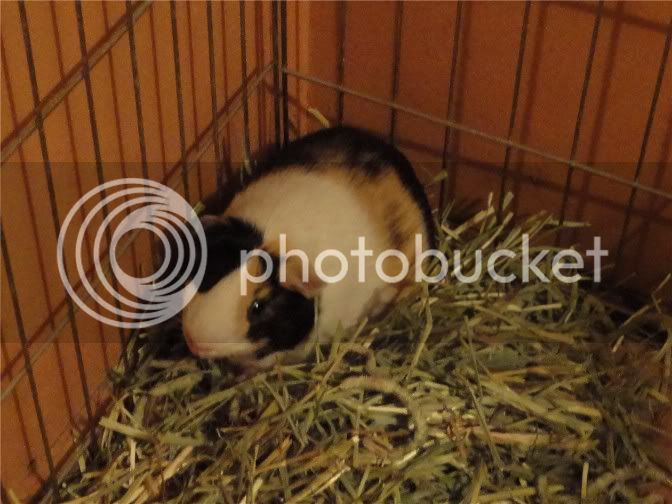 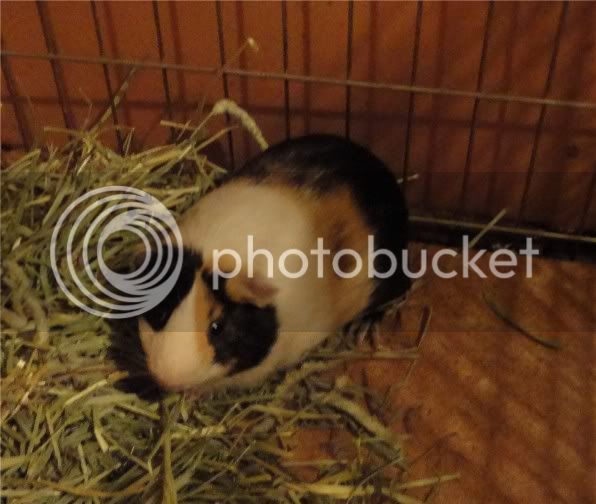 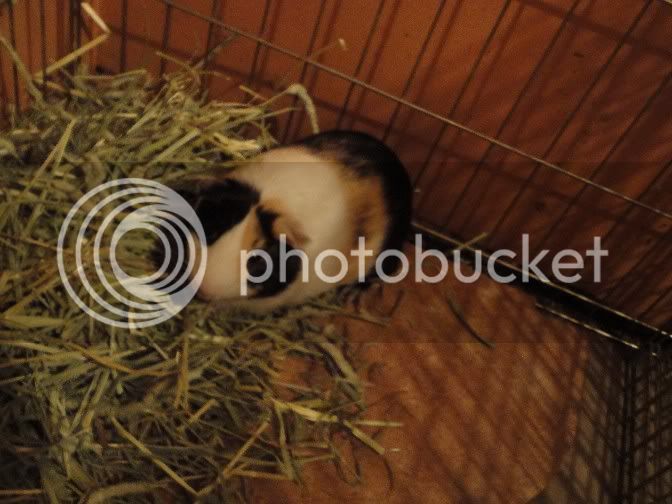 The mommy- Stella -when she was younger - Stella is the friendliest of our Pigs, she loves to climb out of the cage into your hand, she is a smaller guinea pig, not as large as Piggy or the other two girls, and she is a wonderful mother. This is her second litter, and she is so good with them. She also helps them to be friendly as she comes right up when we open the cage and will even call the babies over the cage door especially if we have Celery, which are her favorites. 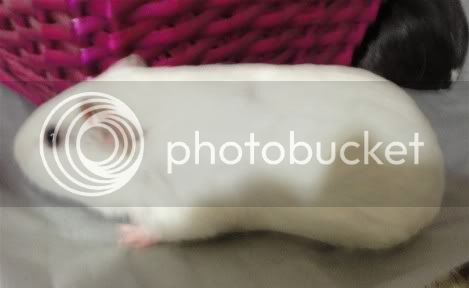 Last Monday in her old cage 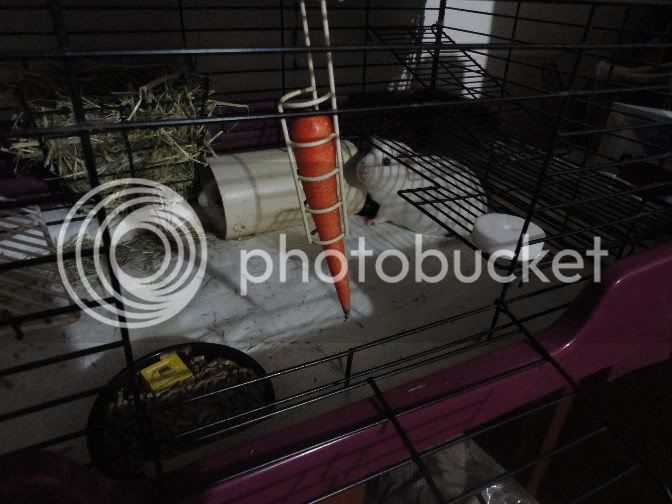 Piggy and Stella together, I took these on Monday, during their last cage change. So she is hugely pregnant in these. 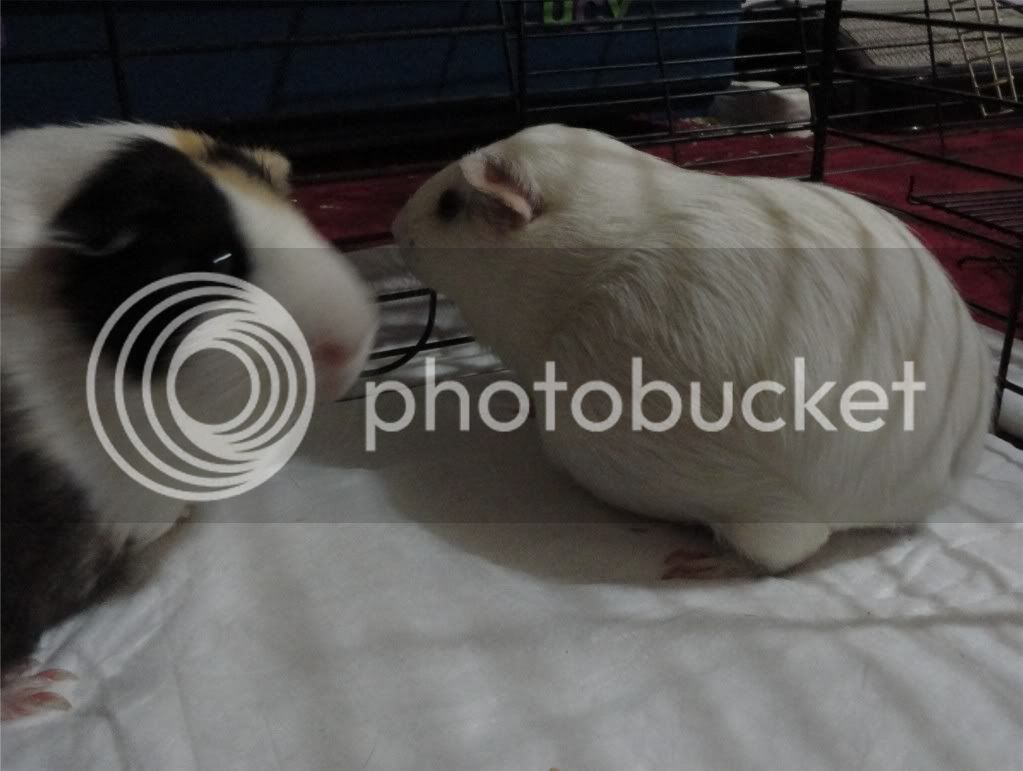 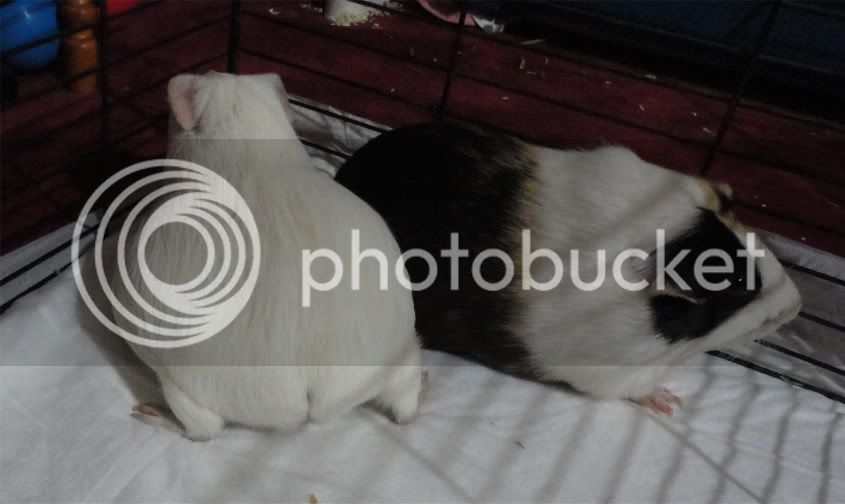 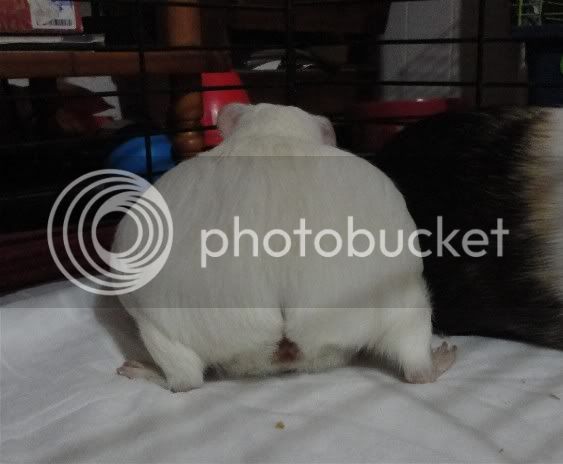 The Babies! First a picture of the first litter which was two boys and a girl. One boy has a brown patch on his head, the other two where white. Picture is from when they where a few hours old, and barely dry. 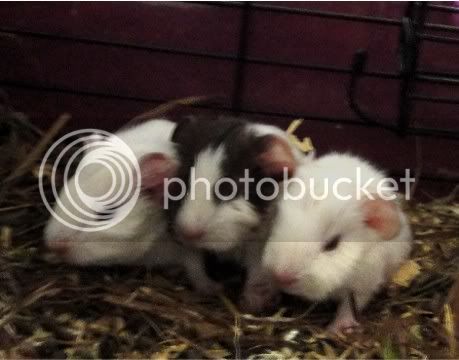 This litter there are four, I am not sure if they are boys or girls yet. But there is One white, one Tri-color, two that are white and creamy tan. One of the two creamy tans has a white blaze the other does not, both have white on feet, chests etc. They where dry when I got home, but had not been born when my husband left for work. So born between 9pm and 10:45pm- I am hoping Piggy didn't have a chance to breed her before I got him out. I am kicking myself for not taking him out sooner. They just hate to be Separated so I waited to long. 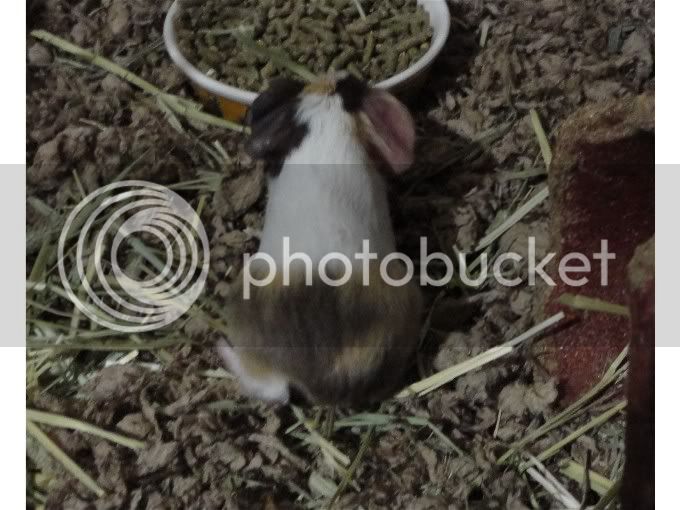 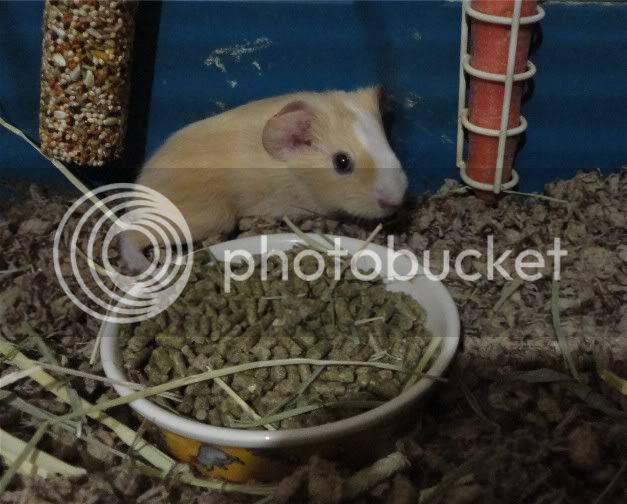 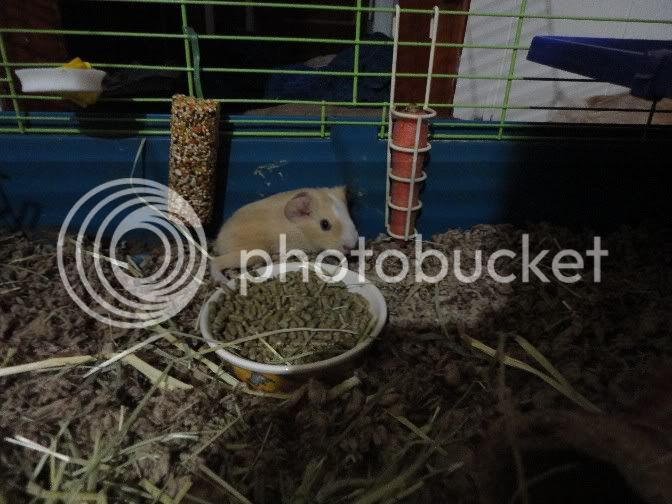 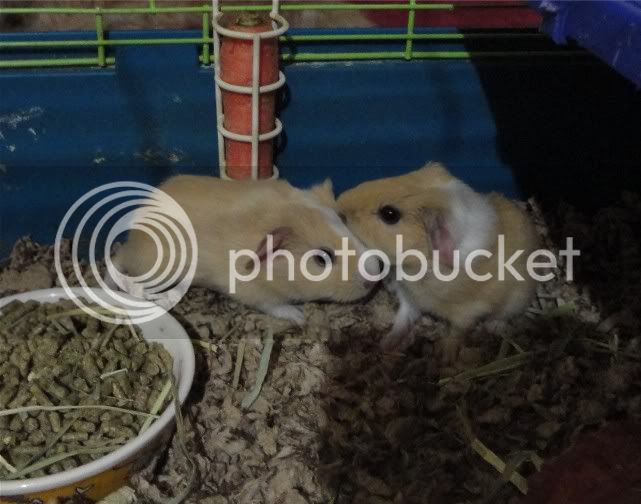 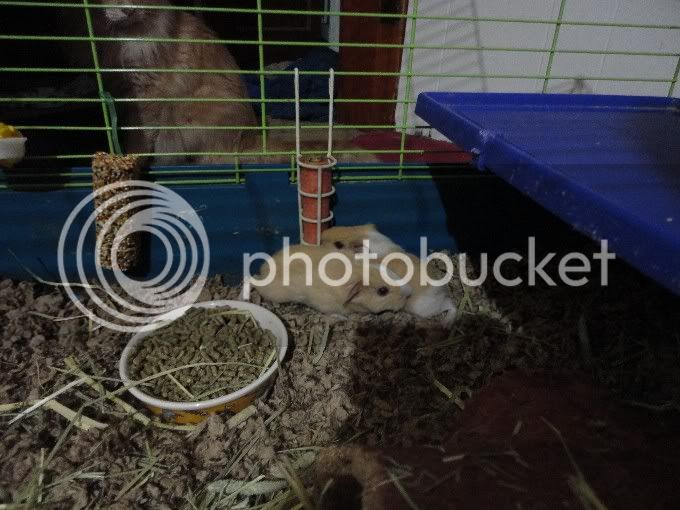 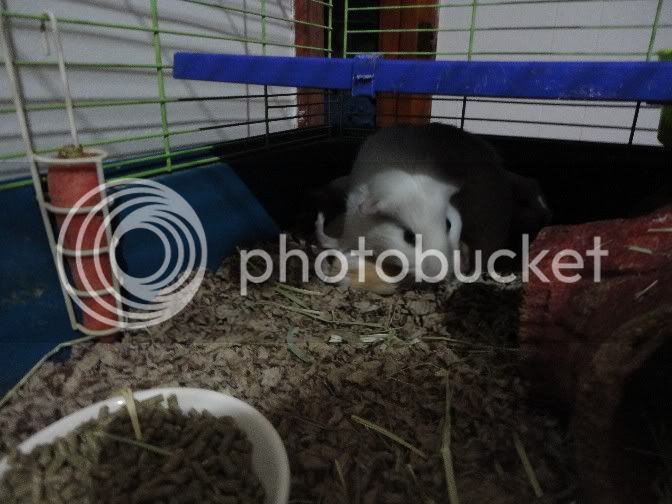 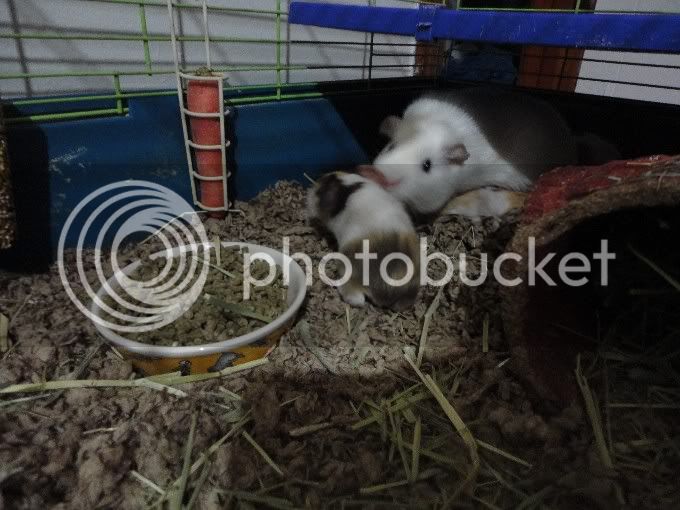 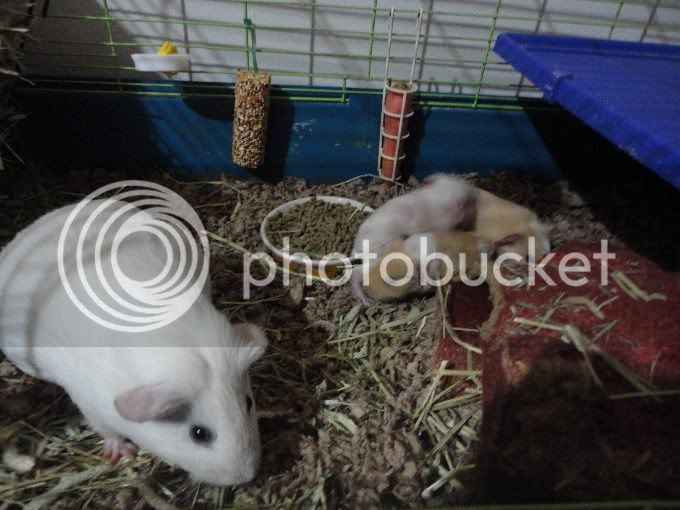 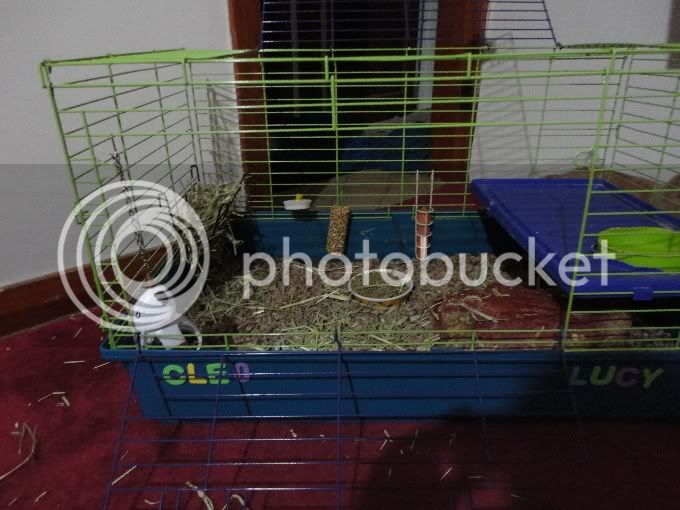 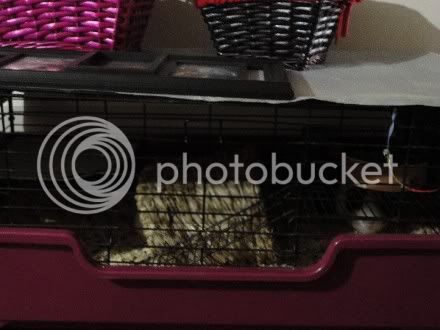 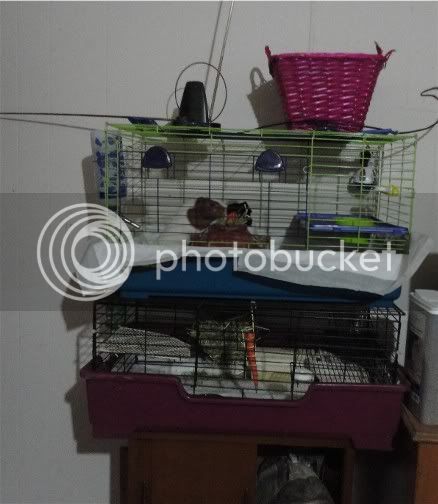 Congratulations on your new babies.

Thank you for sharing!

Oh my, I so want the little cream colored one with the blaze. Too cute.


I had a male guinea pig that freaked out bad, really really bad when he wasn't with his women, it had to be a particular one too. He would starve and chew on himself until he got to live with her again. If I had known back then that it was possible to get a male fixed I would have done so, because they sure ended up having a lot of babies.

We considered getting him fixed, but the vets close by ,up to an hour away, won't do the operation on guinea pigs or other small animals, we live in farming country. The one vet we found, hour and a half drive one way, quoted us at almost $200. This was last fall. They also said that they have only ever done the operation three times, and (in their words) " Only one died. The other two went great." to me a one in three shot of killing him doesn't seem worth it.

I don't even mind the babies as we haven't had a problem finding them homes, I just don't think it is fair to Stella to get knocked up again as soon as she has the babies. I even tried putting Piggy in with the two new girls, figuring I will just keep switching, thus leaving at least three months between the end of one pregnancy and the start of the next in the same girl. I think my plan at the moment is to either buy a C&C cage, or make a cage myself either using tubs (like the big Rubbermaid tubs- The clear ones) by connecting them with pvc tunnels, or using wood (which I know will rot and be harder to clean, but I could build a larger one with wood, and then maybe just fence off a quarter of it for Piggy. I think I will start researching that coming up with plans and see how much that would cost, I really like the c&c but would like to design my own, just buy the cubes and the colorplast and come up with my own design, but am having problems finding the cube except in the cage kits. If anyone knows where I can get them, or a site that sells just the grids, let me know!

Anyone have experience with introducing adult sows? I am hoping once the babies are big enough I will be able to put them all together in one big cage. (all the girls that is)

aww my guinea pigs had babies a while back. so sweet!! i miss em!

You can buy the panels at Target or Meijer or online:


Here, this page lists lots of different stores- including Costco:

We are looking into buying the stuff for the C&C cage. We are also still considering using the Clear Rubbermaid tubs connected together, and with a "wire window" but on each solid side to allow for adequate ventilation. I kind of like this idea as I could cut a large doorway between two to make one big pen, then cut two smaller ones leading to separate tubs with special things, maybe one of extra bedding as a "house of sorts" and the other with some different toys or something. Kind of like making a Giant hamster cage, burrows for guinea pigs? Right now if we do it that way we are going to use 4 tubs for the three girls, and then just leave piggy in the smaller pet store cage for now.

I was also thinking of getting a nice table cloth or shower curtain (plastic not fabric) from walmart ( I work there so I have been scoping them out) Laying the plastic down in the living room (perhaps two layers even) Then put the exercise pen on it. I will probably need to put a top on it, though I don't think my cat would hurt them I would be afraid to take the chance. Maybe even just lay a blanket across a couple of boards over the top, that would give them a bit more cover. This would also be just for the girls, and the babies for now, assuming the other girls don't try to hurt them, I will be introducing them slowly and watching carefully. If any one causes a problem it will be Lola, she chases Panda sometimes even, but I think a lot of the problem is that they just don't have enough room, she wants more space and takes it out on Panda. I would put paper/ or puppy pads on top of the table cloth to prevent them slipping on it. I am mainly using it to protect my crappy carpet. I can use hay for some bedding. Prefer not much so it doesn't get pushed out the side. But would like to avoid the wood chips, and the other loose bedding, unless someone can come up with an idea to keep it in the pen and not on the carpet (they can really throw it pretty far out!)
Let me know if you have ever tried this or if you see an obvious flaw in my plan, or a problem I will need to address before attempting it. This would not be a permanent pen it would simply be to give them more room until I can execute either plan A or Plan B - C&C - Rubbermaid Burrow

I would like to try the Exercise pen cage tomorrow night if possible, starting with the two older girls, or should I start with her and the babies, what if the babies can walk through the side of the pen, I bet they can.... Okay so now that's a new problem, what can I put around the bottom of the pen so the babies don't get out? Cardboard? maybe wire tie it to the sides? just thinking as I am going.
Anyway, any help is appreciated
Melissa

super cute but wow, they have big babies

What kind of toys do potbelly pigs like? Also how should I introduce him to my dogs?