We went out to the barn to feed up about a month ago and we couldn't find one of the guineas. I kept telling myself the missing guinea was the female and she off somewhere sitting a nest because guineas love to hide their nests. I wasn't actually sure though because -well, you try to sex a guinea. Very soon it was evident that the missing guinea was not the female because there was one in the feild screaming "buckwheat!". So our first loss was a guinea. A big fat guinea.

Today we went out to the barn to feed up and as we approached the barn there on the ground in front of the door is a bare spot where I toss them a bit of feed every afternoon to make sure they know where home is. My husband says, "what is that?" And I nearly shouted, "A guinea egg!" I took the egg and put it in a safe place until I could get back to the house and clean it off and put it in my bator. 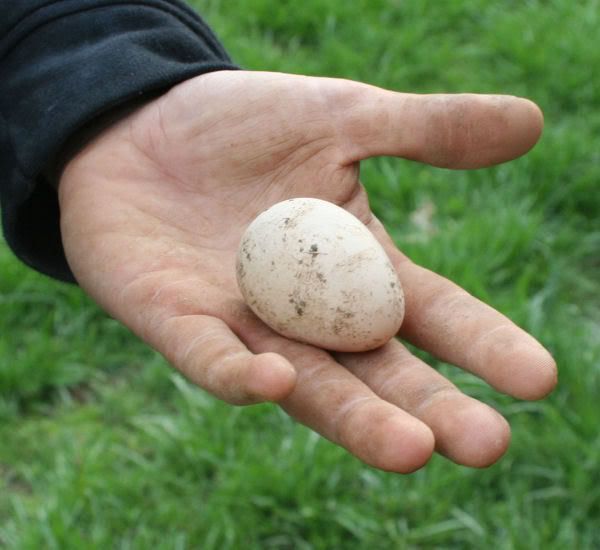 After the chores with the chickens we went to the other end of the barn to feed the goats. There was another guinea egg. I squirrelled it away with the other one. Then sadly I saw one of the guineas trapped between the fence and the side of the barn. Either it had tried to squeeze through and was so big it no longer fit or something chased it into a tight space. We don't know. The traps are set.

I have 2 guinea eggs in the bator to see if they are fertile in 7 days.

Congrats on the eggs. So now can we call you Mother Guinea too? Sorry about your losses

I found it easy to identify the one male in my group of 5 guineas I had bought straight-run from the feed store. As soon as they were mature he began acting bossy & defensive, I named him Honcho because it was clear who was head of that flock. Last year the hens were laying fairly regularly and we LOVED the taste of their eggs, so very rich. But the shells were so hard to crack!

I had 11 eggs I'd put under a broody hen until the day the male attacked my 5-year-old boy while he was minding his own business playing in the sandbox. We figured that Honcho had been driven crazy by his 4 shrieking wives. Still, I dispatched him within the hour, and buried those half-incubated eggs in the hole with him. Good-bye to him & all his DNA! (I gave the hen some more mannerly chicken eggs to incubate instead).

The hens continued to lay for months afterwards, and one or another hen would occasionally want to brood their communal nest. But they've stopped laying for several months now, & I hope they'll begin again. They keep sitting in certain spots & sing their little laying songs, but so far no eggs.

I hope something will get them laying again, but I refuse to get another guinea cock.

Don't you think guineas look like they were drawn by Dr Seuss?

Hope you catch your pest.

Yeah, looking back on the incident I realize we could have eaten Honcho. But would he have been good at 8 months old? And having run & flown around the yard for most of those months? Besides, I didn't know how to process birds for meat at that time, and since my little boy's face was a bloody mess I wasn't eager to face another bloody mess right then with the bird. I just wanted my son to feel reassured that he would be safe again in his own yard and that Honcho would never hurt him again.

MissPrissy~ Are guineas mean? My DH insists they are. I heard they are so good at eating ticks, and we have ticks really bad so I want some. Are they really loud?

I understand completely. Don't give up on them. Raise a young flock for the freezer. Every bite would be worth it.

MissPrissy,
Thanks. I don't keep species together either. He just said they were mean and would go after the kids. I never had any so I have no idea. Once the ticks start showing up maybe I can talk him into it.

My guineas are not mean at all to people, but they aren't anywhere as tame as the chickens, I cannot hold them or pet them. On the guinea forum everyone says that guineas don't smell as bad as chickens, but I disagree. I had 8 keets in the house from 2 days old to 3 weeks old last summer and you could smell and hear them and knew they were in the house. I had 19 chicks in the house for 5 or 6 weeks this spring and you never would have known it other than the dust in that room. My house smelled very nice of pine though, lol. I had them all together outside for quite some time, but separated the guineas from the full grown chickens about a month ago because the alpha guinea started beating up my chickens even the roosters. I don't want the guineas to hurt my 19 babies when I start to let them mingle with everyone else. Right now they are all in a playpen in my large coop. My one rooster on the other hand ended up on the chopping block last Saturday because he would flog me a few times a week and my daughter everytime he saw her. He almost took out her eye last week so it was bye bye Peppy. Even after marinating him for 3 days, he was still really tough eating. I am going to make soup out of the rest of him. You have to let the guineas go 6 weeks in a brooder, then 6 weeks in the coop before you can even think about them free-ranging or they will not come back. Mine are 10 months old now and I just let a few free range for the first time yesterday. They freak out at the littlest thing and forget where "home" is when they are younger from what I have found. They "talk" more like scream at everything when they are younger and can get quite loud. My "next door" neighbor is 1/10 miles away and she can hear them very well.

N
Why is one guinea laying eggs in separate nest from other guineas?