Guineas and the black snake

This is to illustrate that Guineas will not kill a large snake. They won't even harass it.

The other night it was time for close up. My Guineas live in a large building. The feed is in the front corner and then there is the rest of the building. The routine is I go to their feed bin and begin filling feeders. No sooner had they begun to pile in then I hear the buzz. Its the birds that had come in the back door standing there buzzing in a group about something. The buzz of delight over millet is slightly higher pitched and more rapid, this was the opposite of the sound I hear at being delighted. I stopped what I was doing and went to investigate because that could only mean there's a problem. Sure enough, there is a 3 1/2, 4 ft black snake.

Its in a spot where grabbing it and not getting bitten is an impossibility and much too close to where it had entered in the first place so I opted to kill it. That done I tossed the snake out of the coop and went back to filling feeders and doling out millet. Except for Momma with her keets up on the roost, stayed there during the excitement, there are no other birds. I called, still no birds. I go out and find the flock gathered around the dead snake talking about the whole situation. None of the tricks normally used for moving them worked, they would just scoot around the snake, regather in a group and begin discussing the situation all over again.

I took the snake, tossed it in to the pond. There that should bring them in. Well, no. They were gathered in a group just outside of the coop no one volunteering to be the first to go in.

One by one, with much frustration on my part I managed to get all but one in to the coop for the night. The one was complaining loudly the next morning about being the only one out. 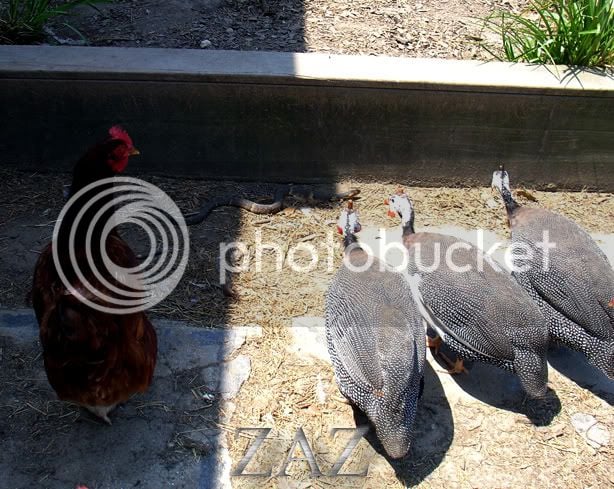 Quote:
I can soooo see this.

I think it depends on the guineas. Mine have killed a snake, a small one (and moles and field mice); not sure what they'd do if confronted with a larger model.