Well, It finally hatched, I had to assist since I was afraid that it would dry out after pipping for almost three days. I know to leave them alone, and chirped my behind off trying to get it to hatch. I would chirp, and the peep would get excited and roll around, but never getting much progress.
It all started when a friend gave me some eggs to hatch. I candled them at 7 days, and noticed one egg was completly dark, then I seen movement. I realized I have actually two eggs that have been brooded. So now I have to guess how far along the eggs are, so when I figured it was time, I took from the turner, and laid it into the other bator which has eggs also that I turn everyday. Well after about 5 days, I noticed it had pipped, oh heck, I got eggs to turn and a chick ready to hatch. I managed to turn the eggs with a shish kabob stick by just opening the bator enough to do so. After almost three days of chirping, and really no progress, I decided to help out just a little. Then it really went to work, and I thought it may just bust on out. After about 4 hrs, I decided that it may be stuck, and figured it may not get out, so I cracked the top. Well the little guy seemed to get all excited, and finally pushed on out. It seems to be doing fine, but wore out after three days tryng to hatch.
Now for the next one, Which I am guessing to move from the turner the next day or two. Then its all down hill from there, I know when the rest of the eggs will hatch, just didn't expect to get eggs that had already started. Wish me luck, I hope the little chic survives. Sure the chic is some type of bantam since it was a smaller egg, and she had bantams.

Good luck on the rest of your hatch. Be sure to raise that humidity when the time comes for the rest of them to hatch. You must post pics of your new little ones. Welcome to byc!

Yea, I keep the humidity up during hatches, these two eggs caught me off guard, so it has been a trick trying to hatch these with other eggs already in the bator. Everything was planned out for a good hatch, but these two eggs threw a wrench in the plans. I have hatched many, many eggs, so the experiance did help, just never had one pip that long, and was my first assist. I knew it was going to mess everything up when I noticed these two eggs, but I had to try.

Here is a pic of the little wiggler, sorry not real good, cause my boy has it cupped so its not dropped. We took him out for just a minute for the picture. I'll try and post more in a day or two. 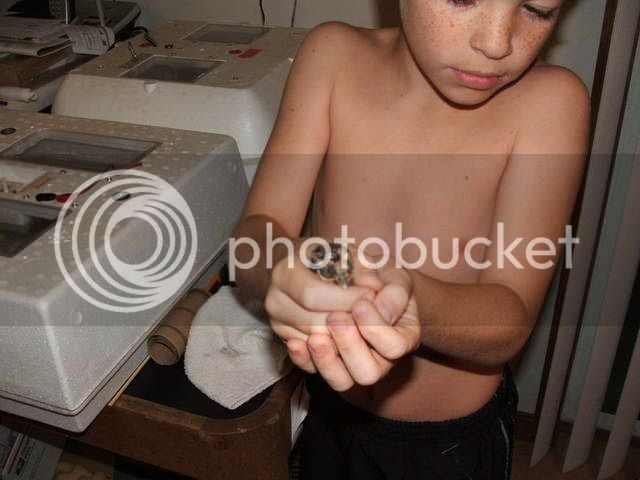 Any luck with the other egg yet?

what a cutie, you did such a good job! Keep us posted on the rest of them.

Well the baby still kicken this morning, I actually put it in the brooder, so hopefully will be ok till I get home from work. I'll try to get some good pics tonight or tomorrow.

As for the other egg, I have been watching it very close, and may take it off the turner this evening. Just hard to guess just when, shouldn't have to worry to much about turning at this point.

I noticed my candlers in the picture, the toilet paper end rolls. lol Hey, they work.
Last edited: Sep 22, 2008

What a nice picture, congrats on the baby! Yup, the toilet paper rolls work really good because they shine the light right through to the egg!

Here is an updated pic of the little chic that couldn't. He/she is doing great, getting lots of attention. Still waiting on the other egg, and will be hatching the rest on the 28th. That way it won't be so lonely.

Congratulations! You make a wonderful midwife!

Keep us posted on the rest of the hatch.

M
HELP! Is this duckling dead???