So, I have been in search, no "quest" for obtaining nice unrelated Seramas! This has been ongoing for over a year. I have finally obtained a minimum of about 33% of fertile eggs. That doesn't sound great, but I was getting about 10%.

I have scoured the internet and have contacted many many breeders and asked every question possible. We also have an avian museum and I spoke with the "bird expert" there, although certainly not a chicken expert. Here is what I found, and would love additional input.

2. I run my Brisnea at 100.00 and 50% humidity. I leave them completely alone until day 10. I then take off the top and candle them in the incubator. I feel that this has really helped fertility, but don't have specifics on it. Everyone goes in the brooder on day 18 at 100 degrees and over 65% humidity. I used these specs based on other breeders experience and the geographic area this chicken is from. It is hot and humid

3. I candle on transfer. Obviously undeveloped or misdiagnosed as fertile eggs are tossed. The rest of the eggs are carefully laid in the incubator.

4. I do not remove the top but I try to monitor closely for pips. If an egg has pipped for 12-24 hours and a significant amount of chicks have hatched I step in. I first listen to peeps. Chicks that are peeping and still have their beaks near the entrance hole are carefully helped out as long as most or all of the blood veins have receded. Most of the time the chick has gotten stuck on the membrane, especially about the neck. Chicks in this positions are basically shrink rapped in their egg. Because I keep my humidity at a constant high {and this is an absolute here}, I find in the majority of circumstances that the actual membrane is especially tough.

5. For chicks to survive a hatch, almost all the veins must have receded. The chick will most likely experience significant blood loss if major or multiple veins are cut. In addition, the remaining yolk must be almost 100% receded back through the chicks navel. I have, especially early on, opened a shell and membrane only to discover the yolk sac is still being absorbed. Every time, I just placed the shellback together and place it against something that makes it difficult for the chick to kick off. Once the yolk sac is absorbed the chick has an instinct that it is time, and sill start to really struggle and will "hatch". I have had instances of chicks hatch spontaneously or with assistance and they had a very small yolk sac and refused to be re-egged. I have never lost one of these guys. I just keep them in the incubator at the highest humidity I can obtain until the yolk sac has done its thing. I always leave another baby to keep the 1st guy company.

6. For chicks that have internally pipped but are having a hard time externally pipping I drill a small safety hole in the air sac (large end) of the egg. If the chick sounds healthy and is screaming his head off and the other viable siblings have all hatched may need a little help. I first carefully observe for veins, both directly on the membrane and via a very bright candler in a dark area. Once I have confrimed that the veins have receded I start to help the chick. I try my best to determine where the beak has internally pipped and I very very carefully taken my thumb nails and just barely cracked the outer shell. I then place the egg back in the incubator and in the majority of circumstance the chick will finish the hatch on his own. If too much time has passed or it is clearly visible the membrane is stuck to the chick I do a mini hatch surgery. I first gently "crack" the egg where I ran my thumb nails. I try not to tear the membrane unless it easily comes apart. Once I have cracked the egg as much as I can, I peel off the part of the membrane that is around the chicks navel. If I see yolk I re-egg him. If the yolk is all gone I get the chick hatched. Because you are doing this out of the incubator you must be quick and prepared. I gather a small bowl of lukewarm water, cue tips, a very small needle, and need nose pliers {small } and prepare everything on a clean towl. You need to be quick to minimize the chicks heat loss and to minimize the hardening of the membrane, which will then stick to the chick. I hatch the chick out the best I can. If the membrance is sticking in key areas I peel as much of the shell and membrane off that I easily can. Then I take a q-tip and dip it in the warm water. I then just rub the stuck on membrane until it is easily removed.

7. The majority of my chicks hatch day 19 or 20. I have hatched chicks out manually as late as day 22. I ALWAYS give the chick every possible chance to self hatch. Key elements are activated during the struggle to hatch. "Being" hatched removes those elements and I have found some chicks lag behind for a few days or may have balance problems for a few hours. There are no guarantees but none of my chicks that had an assisted hatch have died. Studying the hatching process online by a reputable university can help a lot in making the decision of wkther to step in or not. One thing to keep in mind is that once the chick has used up most of his egg air cell the carbon dioxide starts to build. This is what cues the chick to pip and zip. I have found with Seramas that the membrane on chicks that fail to pip and zip is especially tough and/or is adhered to the chick preventing pipping or zipping. Remember, once the chick runs out of oxygen in the egg's air cell and starts breath in carbon dioxide is's time is limited. This is the reason for the safety hole.

8. This is what I have found what works best for me. I suggest practicing on regular eggs drilling a safety hole.

I look forward to hearing about the experience and adventure of others in hatching shipped Serama eggs. This has been one of my top challenges.

Three days. Yellow pipped, zipped, hatched and running around on her own in 6 hrs. Charcoal, pipped, zipped and then needed help 8 hrs later. Rust first to pip, then 8hrs later needed help. 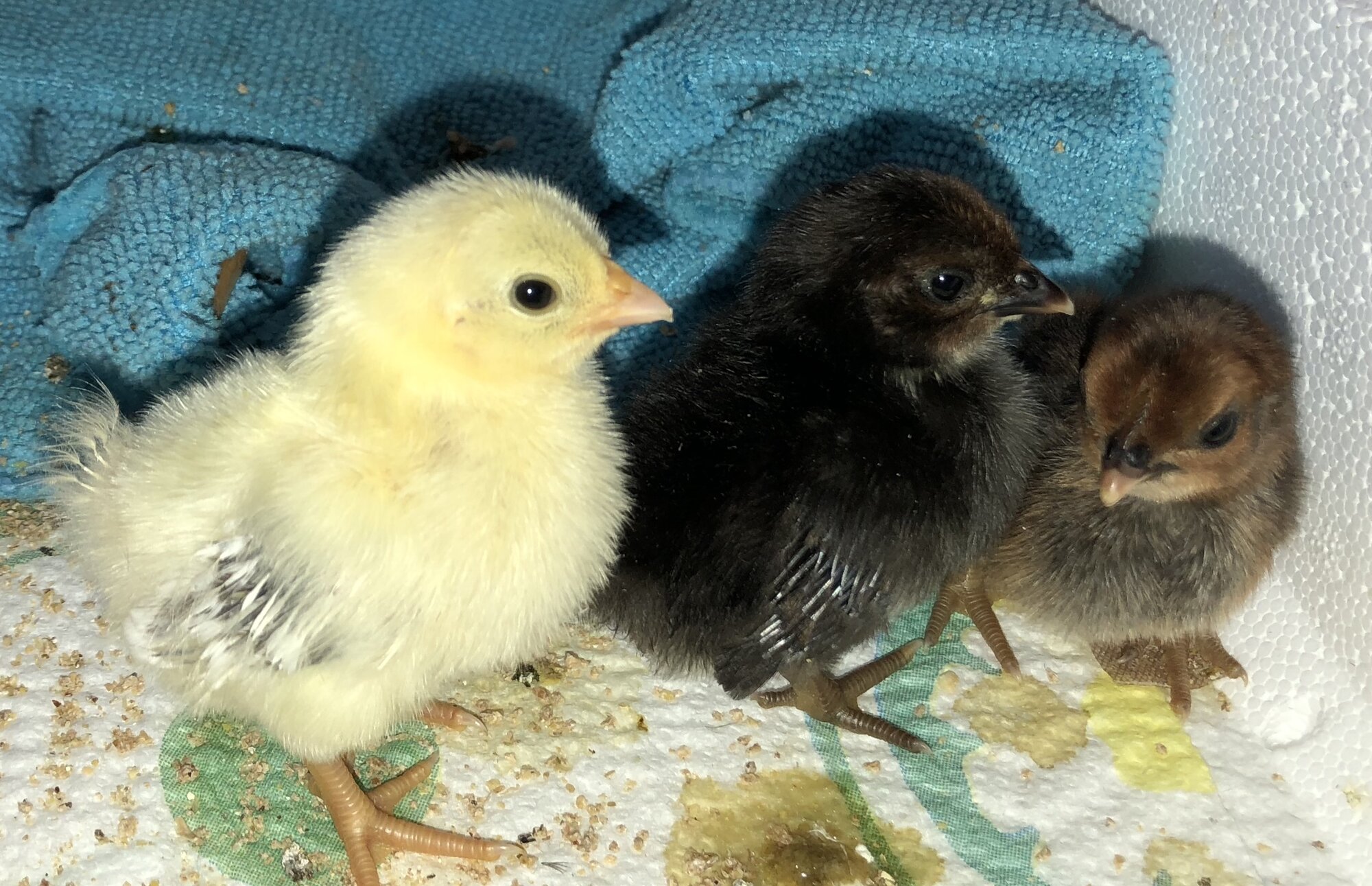 3 weeks later. They know what food is. Yellow is a hen. Rust is a roo. Charcoal is most likely a roo. 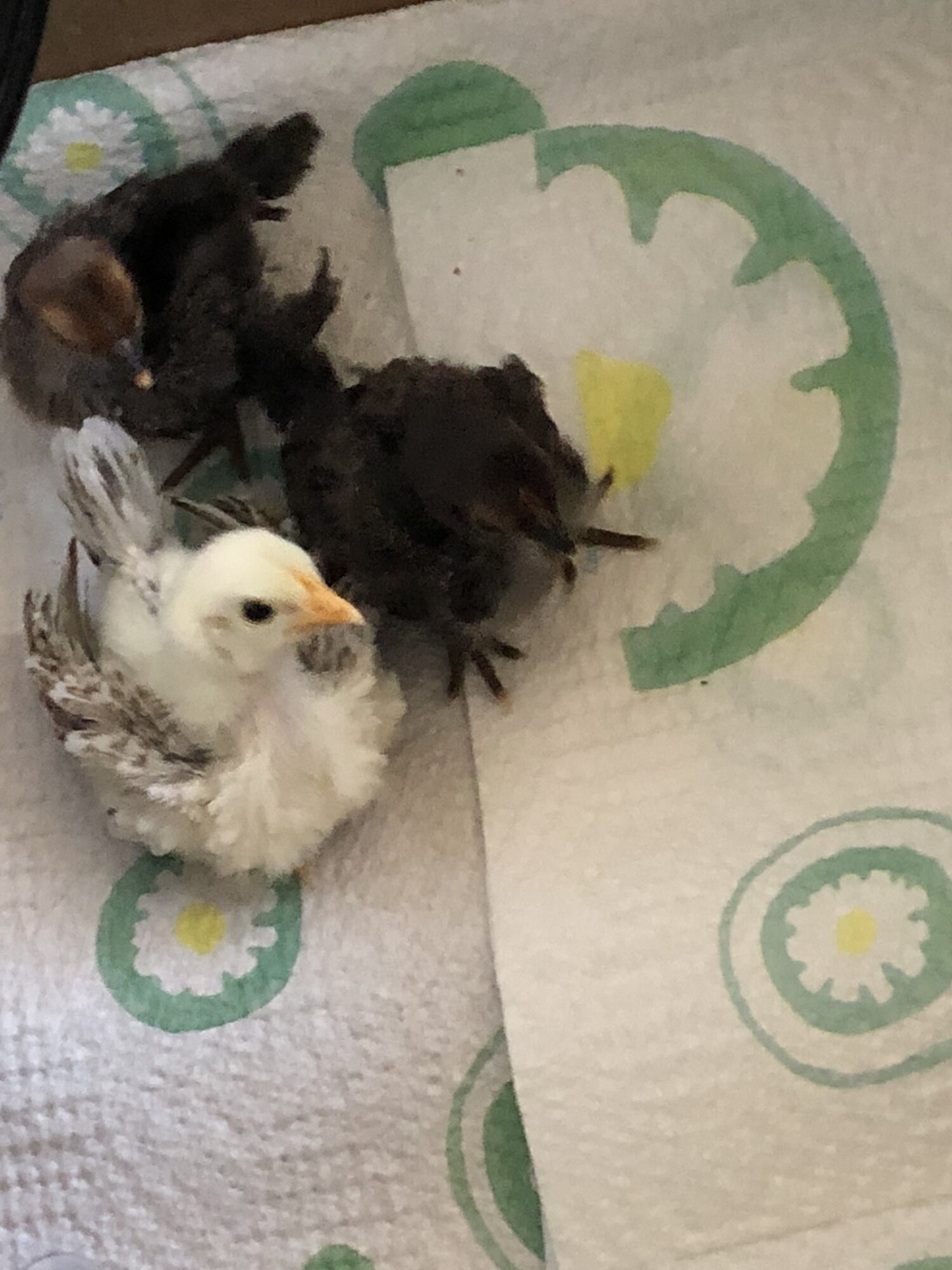 atalanta said:
Three days. Yellow pipped, zipped, hatched and running around on her own in 6 hrs. Charcoal, pipped, zipped and then needed help 8 hrs later. Rust first to pip, then 8hrs later needed help. View attachment 2042350
3 weeks later. They know what food is. Yellow is a hen. Rust is a roo. Charcoal is most likely a roo.
View attachment 2042349
Click to expand...

Those look majestic. I hope we can be shipped with that breed. It would be a lovely addition to my farm.

Overdue chick--Should I help her?

Jul 9, 2022
FirstTimeMotherHen
F
S
When should I help this malpositioned chick?

Was she malpositioned? (Happy ending)