My 3 year old Muscovian hen duck was attacked by an otter a little over two months ago and it either badly sprained or broke her neck. I took her to the vet and even though she couldn't move her neck at all we decided to try instead of cull. She was stuck on her belly for about a month but is doing MUCH better now. She's currently on 1/2cc of B Vitamin Complex & 400 IU of Vitamin E orally 2xday along with half a scrambled egg for Selenium at each dose. She's starting to walk, verrrry slowly, around the room. My concern now is that her neck is basically folded in half and the back of her head sits on the right side of her chest and the base of her neck looks pushed up and out on the left side. It's creating terrible balance issues so she just randomly tips over backwards. It seems to be getting worse instead of better even as she gets healthier and stronger. It takes a lot of effort but she can stretch it out to reach the food and water bowls and eats by herself all day but I also feed her soggy Flockraiser Crumbles 2-3xday to make sure she's eating enough. She gets free choice grit and takes some a couple times a day. She gets a few treats like meal worms, apples, etc. but isn't really interested in anything else. She started at 5lbs 13oz and dropped to 3lbs 9oz but is now back up to a little over 5lbs. She's eating and pooping regularly and doesn't appear to have any issues with her crop.
Since her injury she has been living in a 36" dog kennel in my office but the past few weeks that she's started sort of walking around I've been blocking off the carpet and letting her out in the evenings to wander (and tumble a bit) around the room. She also gets two paddles a day in the bathtub which she adores. And I know I'll get some flak for this but she also sleeps with my dog and I because I just got tired of seeing her so lonely at night! Haha.
My question is whether or not there's some kind of brace or something that will help gently straighten her neck back out and allow the muscles to heal properly? Or even some holistic, homeopathic remedy, maybe massage? that anyone has experience with for muscle strengthening? She has the will to get better and is an absolute sweetheart so I want to do all I can for her.
Pics are front and back views of her neck. The front view is when she climbed in the water bowl unintentionally because her depth perception is so wonky. She didn't seem to mind tho. If it fits I sits. 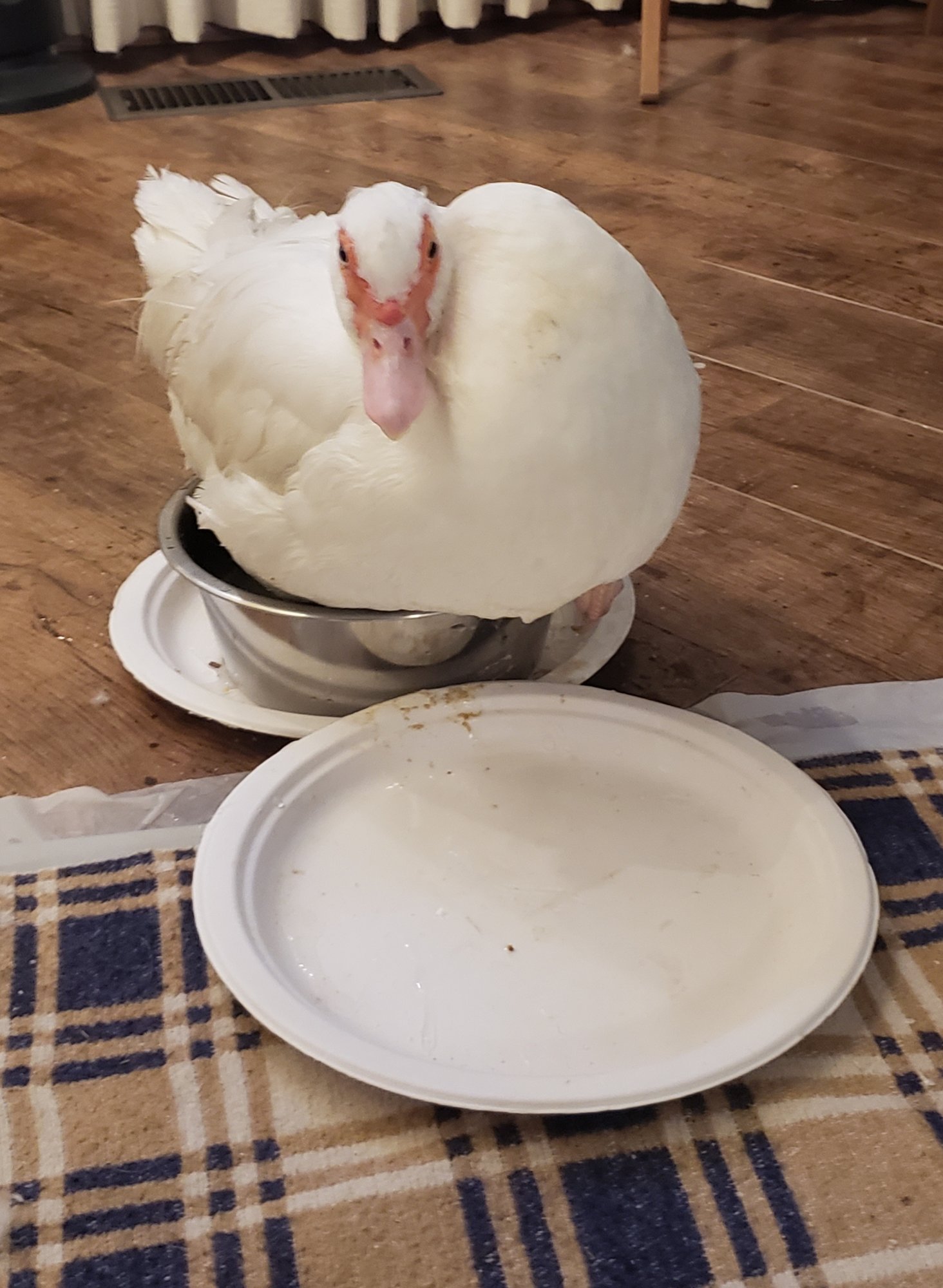 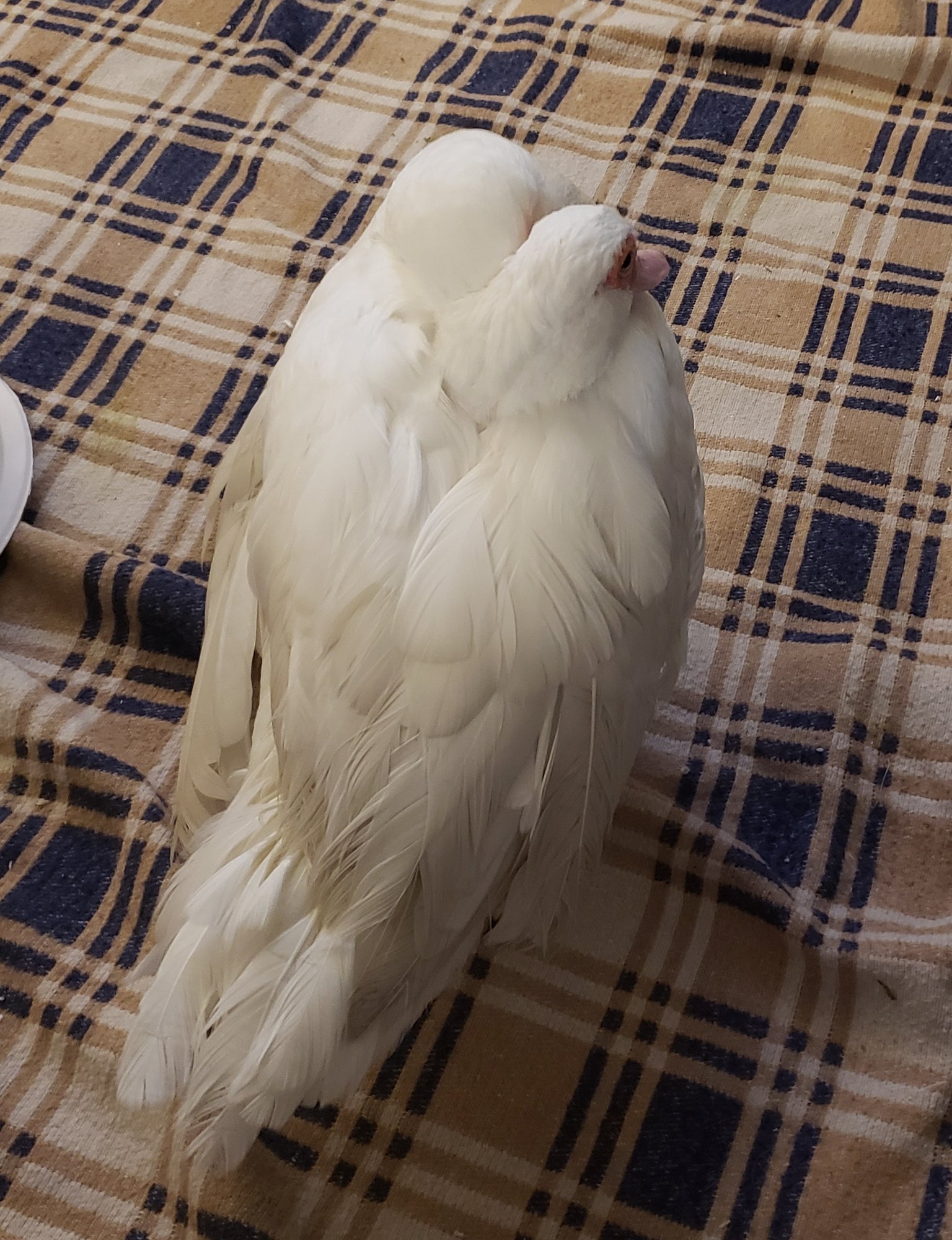 Has the vet given any advise on what to do for a brace or what could be done for her neck? Just looking at her now I am not sure she can straighten out her neck far enough for a brace. Has she been able to make her neck normal position at all since the attack? Massage may help placing her in a nice warm tub and gently massaging her neck. Shes a beautiful girl I hope someone has some ideas. Only thing off the top of my head is the foam insulation for water pipes > it's soft and could be taped since it's cut down the middle to fold over pipes? @casportpony @Pyxis

My duckling looks and is acting a little weird