Health authorities still search for cause in bird flu death 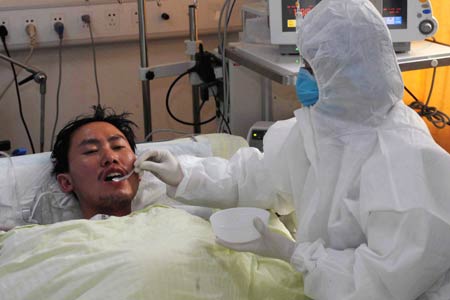 Health authorities in south Guangdong province have yet to find the cause of the highly pathogenic H5N1 virus, commonly known as bird flu, that led to the death of a bus driver, a local disease control official said Sunday.

The 39-year-old man surnamed Chen in Bao'an district of Shenzhen was hospitalized for fever on Dec. 21 and tested positive for the H5N1 avian influenza virus. He died of multiple organ failure Saturday afternoon, the Guangdong Health Department said in a statement.

The department also said that during the previous month prior to his fever, he had no direct contact with poultry and hadn't traveled out of the city.

Chen's wife said he had a habit of doing morning exercises every day near a wetland park and an artificial lake not far from his home, but "no proof has been found that his infection is connected with the migratory birds there," He Jianfeng, director of the Epidemics Studies Institute of the Guangdong Disease Control Center, said Sunday.

"We also don't know whether he had eaten poultry before he fell ill," He said.