I am having a problem with one of my Rhode Island Red chicks being super aggressive and I'm a bit concerned that she is actually a Roo. I got 4 Rhode Islands about 3.5 weeks ago, so they are about 5 weeks old. From the very beginning one of my chicks was different from the other three. Not only was Little Brown (the chick in question) darker than the other three, he/she was smaller too. The three other chicks would cluster together and lay together to sleep and Little Brown was always alone. I actually thought for a while that he/she was sick. Anyway.....a few days ago we got 2 barred rock chicks that are approx. 3 weeks younger than my Reds. Little Brown will not leave them alone, he/she will chase after them and peck them over and over again. It got so bad that I put Little Brown in a separate crate with water and food and segregated him/her overnight. The other 3 Reds have no problem with the new barred rock babies. They keep their distance and are obviously dominant, but they don't peck them and basically leave them alone. So, I'm trying to figure out if Little Brown is just an aggressive hen, or actually a Roo. I can't have a Roo in the neighborhood I live in and I CAN"T have him pecking the barred rock babies to death. I have put Little Brown back into the pen with the whole gang for the last hour to see if he/she got the hint from being segregated, but he/she is still pecking them.....not non stop like before, and not chasing after them, but if they try and get close, or try to eat while he/she is eating then they get pecked until they run off. Little Brown is obviously the boss of my gang, but is he/she a Roo boss? I guess I'm just looking for advice, maybe some expect opinions

(these are my first chickens) Sorry this was SO long! I'm just really frazzled and worried. This is one of the three other chicks.....all of the other 3 have the same coloring and look almost identical Another one of the three Let me know what you think, or if you need better pics, or ones that show different parts of the chicks needed for identification purposes. These photos were taken this evening with poor lighting.

Thanks so much!
Gina

Little Brown's comb doesn't look any bigger than your second chick's comb. I don't see anything rooish about her at this time.

I have never owned RIRs, but did have a production red chick that I had to return to the feedstore at about 1 month of age because of its aggressiveness to the other chicks (it was also cannibalistic). We kept the other PR and she is one of our favorites - some chicks are just more aggressive than others.

Well, Little Brown needs a new home. Things seemed to be going smoothly with him/her in with the others but this morning we woke up to one of the little barred rocks dead. We've moved Little Brown to the other crate again and are trying to figure out what to do with him/her. I just can't keep an aggressive chicken like that in my flock. I'm sad today.

Oh - I'm so sorry. That must have been so hard to find this morning.

At 5 weeks they should all be working out their picking order. As long as they have enough brooder space, they should be able to kick each other's rears and figure out who's top and who's not. I'd look for other possible reasons for a dead chick, as 5 weeks old is unlikely to be able to kill another chick, however, 2 week old chicks with 5 week old chicks is often not the best idea due to the age difference and large behavioral difference between the two age groups.

Here is a picture of my RIR roo when he was about the same age as yours. 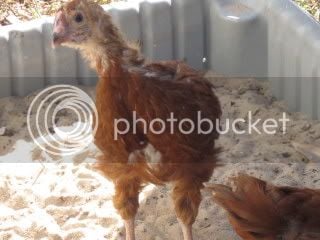 Quote:
Yeah, I cried this morning when the hubbs woke me up and told me. I've only had my barred rocks for a few days but I am attached to all my chickys and I hate seeing helpless animals die.

R
Spotted Eggs is this normal?