I've come seeking guidance on how to break bully behavior. I had a 2 year old girl go broody..the first one in my brood of 7 (3 of them are 2 and 4 are 1 year old). She was broody for 12 days when I finally broke her in my “chicken jail” dog wire cage located in the coop. She was 2nd in the pecking order but when she came out although everyone below her pecked her or mounted her or fought her in trying to reestablish the order, only 2 of the younger girls have continued to the point of drawing blood.

I have thrown them in chicken jail for days and then let them out and supervised them a bit and let them try to sort it out but when blood is drawn over and over my poor girl is jumping in my lap or on my shoulder or hiding in the coop and not eating or drinking (that’s all in the run), well, I can’t be there 24/7 to make sure they won’t kill her.

The two immediately gang rape her when let out, have taken her down to the ground by her wings and, act like a rooster by grabbing her neck..they have ripped her comb too. I have also tried letting one out at a time and it’s the same. I have also given treats only to those out in the run and right in front of the jail birds..no success when eventually let out. Was hoping they would again be at the bottom of the order since they have been “cooped in” for about 4-5 weeks now but no such luck.

I’m so aggravated/angry by this. What else can I do?

Try keeping them separated- but in sight of eachother. They will see eachother all the time and maybe they'll calm down? I'm not an expert but I'm sure someone will come along

Are you sure she's not ill? Sometimes we can't notice it- but other chickens can so they pick on them.

I have a crippled hen that was mauled by a dog as a young chick. Everything was fine with her in the flock until this spring. Now if she is out with the others they chase her down and pull her head feathers out. I can't be there all the time either. It's come to the point that she stays in one of two coops. I have had husband build a shelf where I can put two little bowls with food and water for her in whichever coop she is hiding in. I have no good advise for you. I don't "break" my broodys as this can occur. Jailing doesn't work either. Make sure she (like my Little Buffy) has a place to hide and make sure she has some food. That's the best I can do (and it's pretty pitiful I know). This is my Little Buffy today. I do all I can to protect her. 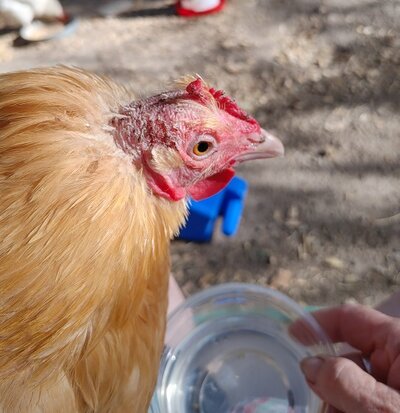 Ltvo said:
he two immediately gang rape her when let out, have taken her down to the ground by her wings and, act like a rooster by grabbing her neck..they have ripped her comb too.
Click to expand...

These two would make a fine soup.

PippinTheChicken said:
Try keeping them separated- but in sight of eachother. They will see eachother all the time and maybe they'll calm down? I'm not an expert but I'm sure someone will come along
Click to expand...

As stated in my original statement, they are separated within the run in an elaborate dog crate and so can see each other all the time

PippinTheChicken said:
Are you sure she's not ill? Sometimes we can't notice it- but other chickens can so they pick on them.
Click to expand...

I would not consider broodiness as an illness.

Although it can lead to illness if the broody is not well taken care of.

There will be shifts in the pecking order by the time a broody is back in the flock, but what the OP describes goes far beyond the usual squabbles.

I would eat them, as other chicken keepers would sooner or later face the same behavioural issues in case of rehoming them.

@azygous wrote an article that helped me with an issue I had with a hen being bullied but I am having trouble pasting the link here. I just searched “bully” but look at articles, not forum posts

Karm said:
but I am having trouble pasting the link here.
Click to expand...

How to take a bully down a few notches?