OK, latest. She is laying down in the crate in the room. I held her for a while - she is not very warm. Under her wings are more tepid than hot. I presume this is because she has had nothing to keep up her heat at all. The room is about 19'C (66'F) but could fall during the night to about 10'C (50'F).

Should I try to get some heat on in there or am I making matters worse? She has not had any food whatsoever, and as she hasn't had much getting through her, I think she is on the point of starvation possibly.

I really want her to get through tonight and hopefully then the vet can sort her tomorrow morning.

She stopped drinking as I said, so we did not force hydrate her.

It all feels a little scary at the moment. She is super wobbly when walking. She sat quite calmly with me whilst I held her to keep her warm for about 30 mins. Now she is sat in the crate, on a towel with other towels over the crate to keep any cold out or warm escaping. It will allow airflow because there are gaps.

She needs some nourishment. Have you massaged her crop some? Can you then offer some soft scrambled egg with some extra water mixed in? Give her plenty of water.

Thank you. She made it through the night. She is on her feet but still quite unstable.

Clearly she is very tired but she is drinking again and I took your advice and gave her a teaspoon of scrambled egg mixed with water. She enjoyed that but as she is likely to be operated on in just over 3 hours, I thought I ought to keep it to a small amount (particularly as the vet said to restrict food). I did wonder about giving her some sugar or honey in her water but I simply don't know if that could be more harm than good.

I did check again on the crop to see if there is any movement. There isn't, it is still as rock solid as it was two days ago. There is no ability to squash it or squeeze it. It is genuinely like she has a stone in there. I've dealt with impacted crops before and usually they feel like there is some ability to have some impact on it before it starts to breakdown.

This reminds me of Betty, some years ago and now sadly gone, who had the same thing. It turned out that apart from all the nasty unprocessed food/material in the crop, there was some plastic she had ingested that was basically blocking things. She survived once removed and we just needed to check her crop regularly from then on in case it had gone pendulous. Sadly she died of ascites a number of years later but she was the same age as Peggy (we bought them together) - she was a Light Sussex and a beautiful temperament.

We now have to leave it in the hands of the vet and hope she has enough energy to sustain her through the operation. She is weak, no doubt about it, but this must have been going on a long time and only small bits of food have got through. It would explain the runny poop that looks like "bits" of things, rather than a processed lump. Grain looks like grain most times and soft stuff, like sweetcorn, is still identifiable (although just the casings). So I guess nothing has been "ground down" in the crop and what little got through, just got through as it was.

Thank you again for your advice. I will update later today when we have been to the vets. We are 2.5 hours away from leaving, it's a 30 min journey, so hopefully we can get her there without issue. She travels well in the car - just sits down as soon as we start moving. Only sad thing is the vets are still not allowing owners in the building with their animals, so you have to hand over your pet in the car park. Not ideal - one of our cats is uncomfortable with strangers and went through Hell because she had nobody familiar to be with her. In the context of the pandemic, this is obviously utterly trivial and I fully realise that, but it is just unfortunate I cannot go in with Peggy today.

She is with the vet. He says he has no option but to operate or she will die. Possibility she might not even make it through the op, so he is giving her glucose etc first to give her some energy etc and stabilise her a bit more.

We are now back home waiting for the call but it could be another 5 or 6 hours because it's a Saturday, there's only one nurse and they have a dog coming in with severe ascites.

It will be an anxious wait. I hope she makes it.

I hope that the vet is able to help her. She may have a long recovery, since crop problems can be a result of other reasons, such a gizzard problem, or intestinal damage, or even reproductive issues.

Thanks @Eggcessive. Long recovery I can cope with - I just hope we get the chance, but I agree with what you're saying. I had wondered if there is something else underlying that has caused this? I keep hoping he finds plastic or something in there like with Betty. Once it was gone and she healed, she was like normal again.

I am not an expert on crop issues, but there are others here that know more. Good luck on her surgery.

She's made it! He said it was a lump of all sorts of very hard fibrous materials that have been there a very long time and were blocking the whole thing up. He said, he hadn't even fully finished stitching her and she was trying to eat the sweetcorn that came out of her! That was over 4 days ago, so nothing was moving.

He found no plastic - but says he thinks this is her problem and has been because during the summer months, she's eaten very large leaves. He said they were not the baby spinach leaves which "had broken down into almost nothing, these were big leaves she must have eaten whilst foraging and they, along with hard stalks/straw/grass and possibly even things like bindweed, have just made this huge hulk of nastiness.

He has stitched up her crop but not her outer skin. He says he would prefer that to naturally heal. That scares me! We will keep her indoors in a crate on a towels with no danger of dirt/straw getting in there. I kind of wish he had stiched her up though. So I suggested putting a surgical stocking on her - he thought this a good idea.

So, a week of layers mash/soft food (scrambled egg) and then hopefully she can go back to the flock. 3 day follow-up next week to see how she's getting on.

Can you tell I am relieved!!!!

Good to hear that she is recovering. That is interesting about not stitching the skin layer over the crop.

We are home. She is tired but drinking a fair bit and has eaten some mash. We are being careful with food to make it small but often so it doesn't overburden the stitched crop.

Yes, I asked about that too @Eggcessive. Basically he said it was because the matter that was in the crop was infected too and some of it will have made it's way into the wound in her skin. So rather than stitching it up, he felt that keeping it open and inserting manuka honey (medical grade in a tube - cost a small fortune) twice a day would be better as no infection would get trapped in there.

We need to keep her indoors for a week. He will see her again on Monday afternoon for a follow-up check.

She is on antibiotics for 10 days. Her colour is a little paler than earlier but then again, she's just had an op.

She is standing up and eating, then drinking, then sleeping standing with both eyes shut. I'll try to take a picture in a moment.

We can give her anything soft - so some tuna, scrambled egg etc (in small quantities) to get her weight back up again.

When we collected her, the nurse said it was the most unpleasant thing she has ever had to assist in. He said "you were lucky you didn't have a chicken covered in vomit!" I asked if it was smelly. "Oh, boy was it!" she said "it was the size of my fist in total and the stench was incredible."

So, clearly that is better out of her. Hopefully now the recovery takes place slowly but without incident and Peggy can get back to being a big chicken with a big attitude!

I'll keep the updates coming - particularly if this helps anyone else in the future.

Here she is alert although she stands in the same position with her eyes closed too. 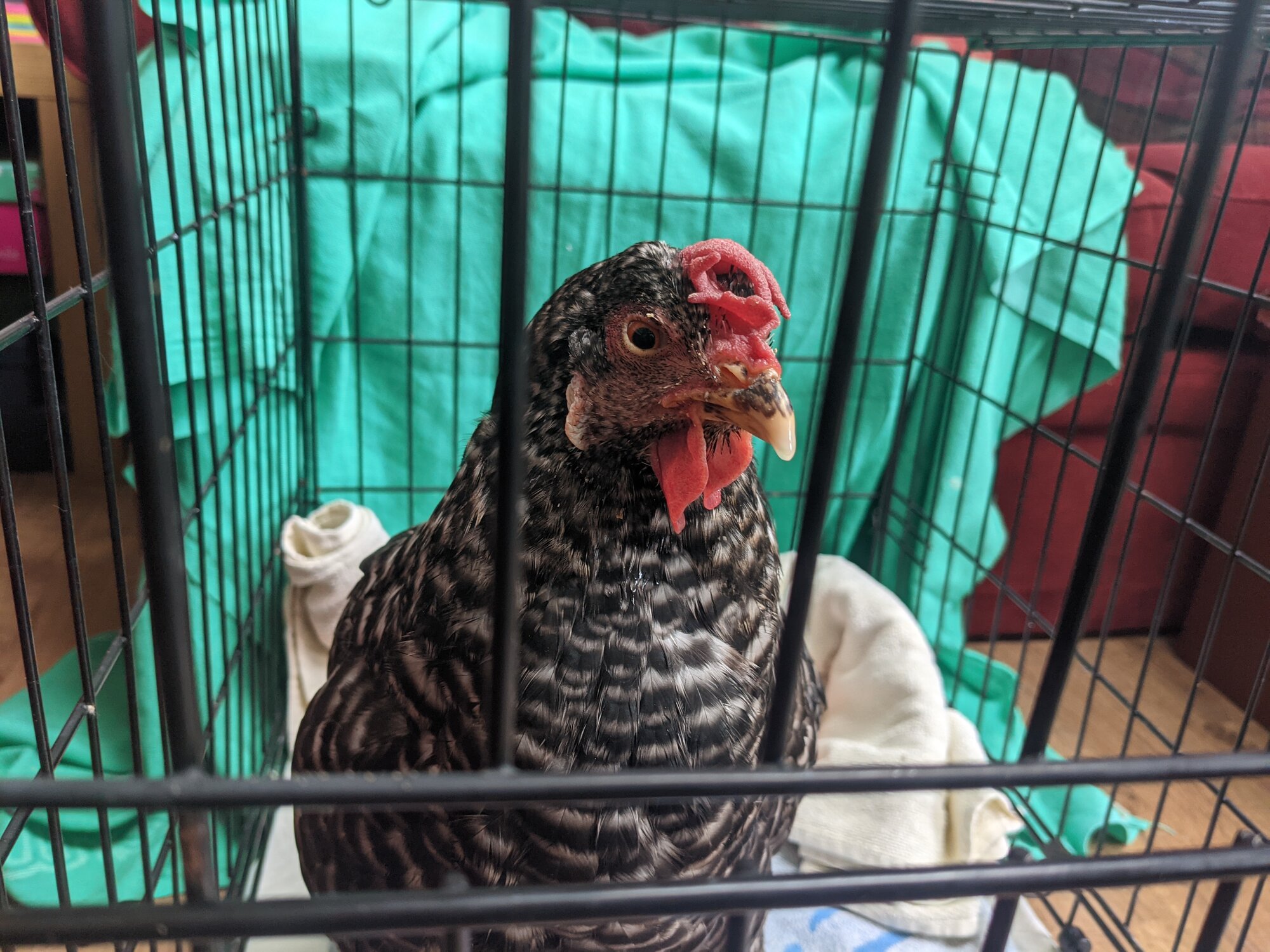 And here's the wound. Not much to see really. 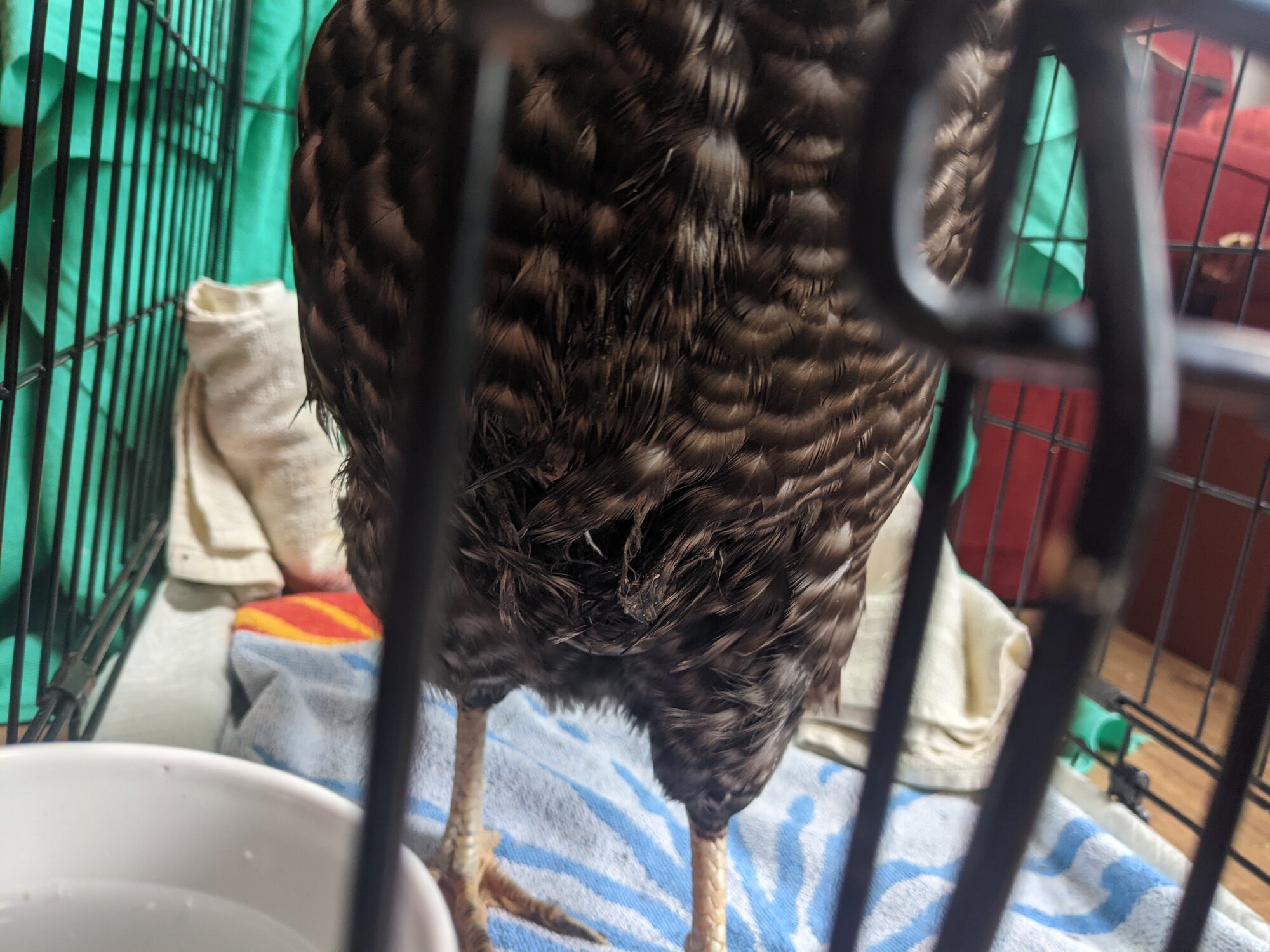 T
Lost one hen yesterday, another with swollen abdomen