When I let my chickens out this afternoon, I had one of my hens that didn't come running out, which isn't unusual for her, sometimes she hangs back. When I checked in the coop she was laying down and wouldn't stand up. I picked her up and she didn't fuss, not normal, and tried to stand her up. She just fell over. I can move both her legs, and she'll move her wings, and tail. She's a 12 week old Wheaton Maran. I'm a total newbie, so I don't have a clue. She was fine yesterday when I put them in last night.

Update: She can move both her legs. When I pick her up, she will stand as long as I hold her. Once I let go, she topples over. She will eat and drink. She's at the bottom of my flock, but I've seen her eat and drink with the other birds. I've got her separated with her own food and water supply. I noticed her toes on both feet were curled up, and one let was tucked under her, and the other was stretched out. 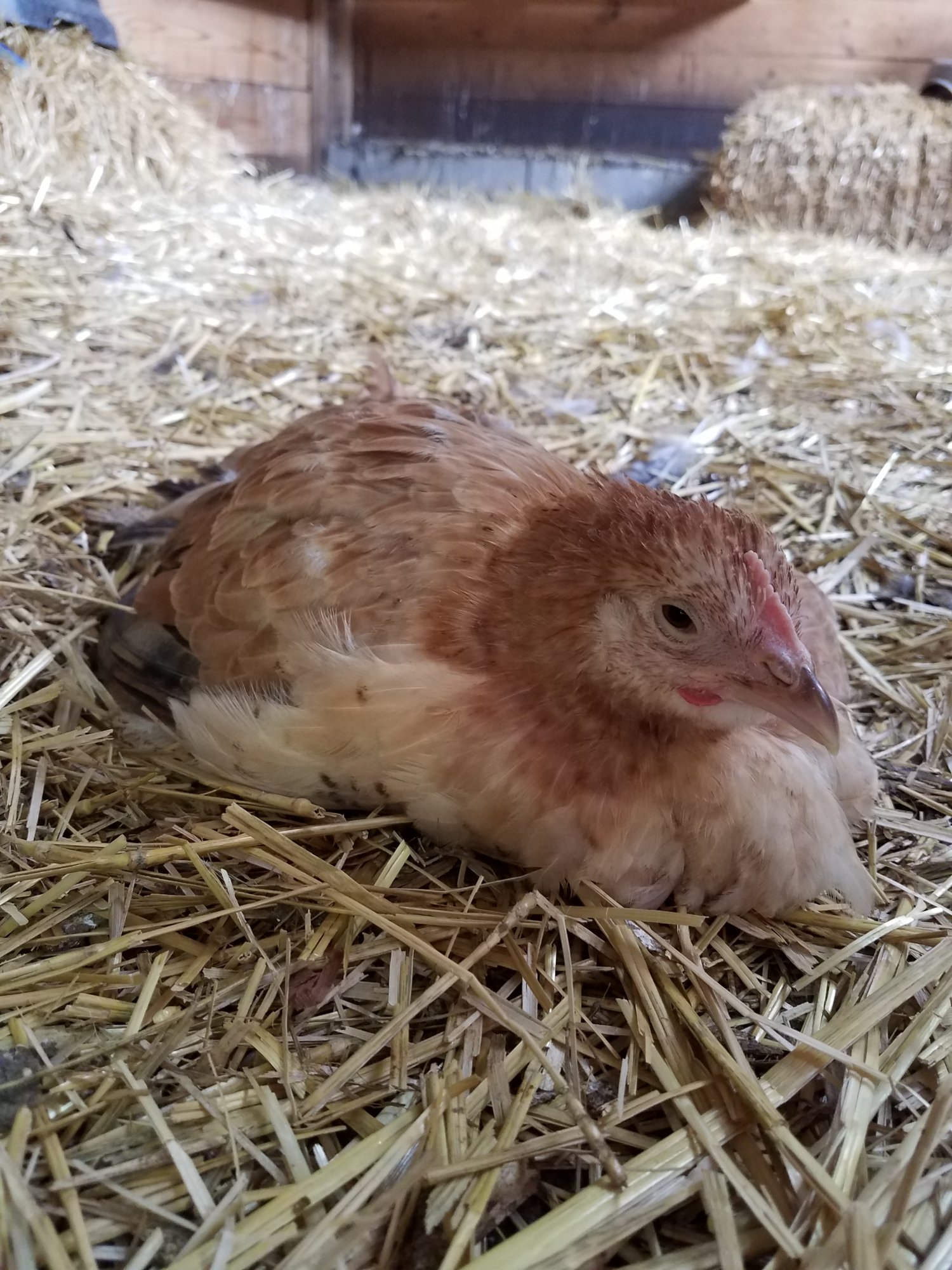 Has she been sleeping a lot?

Not that I've noticed

Is she having runny poops or any with blood. Coccidiosis can really weaken them. Corid will treat that. Was she vaccinated for Mareks disease? Her symptoms may be caused by a vitamin B2 (riboflavin) deficiency, dehydration, or she could be showing some early signs of Mareks. I would use some electrolytes and vitamins in the water, and offer the pullet some chopped egg and put a lot of water into a small bowl of chick feed to make it soupy. Since she cannot stand by herself, a chicken sling may help with her feed and water placed in front of her. Hopefully, she is just weak from being temporarily lame, and not getting enough to eat and drink. Please let us know how she reacts to the treatments.

I've already treated my entire flock for Coccidiosis about 1 month ago, when I lost two birds. After reading this I took some yogurt out to her while I boiled some eggs, and found her dead.

I don't know if she was vaccinated for Mericks, since I bought her along with two other pullets and a young rooster to replace two birds that my dogs killed. I assumed they were because the lady was all about bio security at her place, and they were 8 weeks old when I bought them.

I am sorry for your loss. Many people who raise their own chicks do not vaccinate for Mareks, especially if they have never had a problem with Mareks on their property. Most people who are breeders take great care with biosecurity when others come on their property if they are wise.

If you still have her body, I would refrigerate it and contact your state vet or college poultry lab to get a necropsy don where they can do special testing for Mareks.

Hi
So sorry you lost her.

Unfortunately it sounds very much like Marek's Disease to me. That one leg forward, one back is quite a classic symptom although many birds with Marek's don't exhibit it.
Most independent breeders do not vaccinate.
You say you treated for coccidiosis 4 weeks ago when you lost 2. What were their symptoms and did you have this bird then or was she to replace them....I'm a bit confused about treating for cocci, losing 2 and the dog killing 2.... was that 4 that died or just 2 that the dog killed. The reason I ask is that Marek's compromises the immune system leaving the birds vulnerable to coccidiosis and other parasites and diseases that would not normally affect them, so the coccidiosis may have been as a result of them having Marek's. They don't always show paralysis/lameness/lack of coordination. Some get visceral tumours from it and die quite suddenly with no obvious symptoms, some get sick and die from secondary issues and some show neurological problems. It's a very difficult disease to understand.

I hope no more of your flock show symptoms but would second getting a necropsy done so you know what you are dealing with and take appropriate precautions.