(1) I am new to chickens. Our family has been thinking about adding a few to our family for some time now. We're beginning the research process to learn about what's all involved.

(2) No chicken yet but we're thinking about having four or so.

(3) Still researching breeds. Hoping to find ones that are good with children.

(6) We have four boys and a cat in the family. We recently moved into a house with a one acre lot. We're excited to finally have the space to contemplate adding some chickens into the mix!

Welcome to BYC.
We have great articles in for beginners here in the LEARNING CENTER.
and here is a great one about feeding:
Proper FEEDING
Read as much as possible before you get the chicks.
A

Thank you! We don't have a coop yet. Planned on learning more first. This site looks like a wonderful resource.

I appreciate the links!

Browse through these: COOPS
to get some ideas.
Building one is 1000 times better than anything you will find in a store/online.
(they usually recommend that it houses a certain number of chickens....always decided that recommended number by at least 2..and that is what it will really hold/house)

Welcome Artsy.
Buff Orpingtons are a great dual-purpose breed that are docile and good with children. My niece and nephew below would agree. 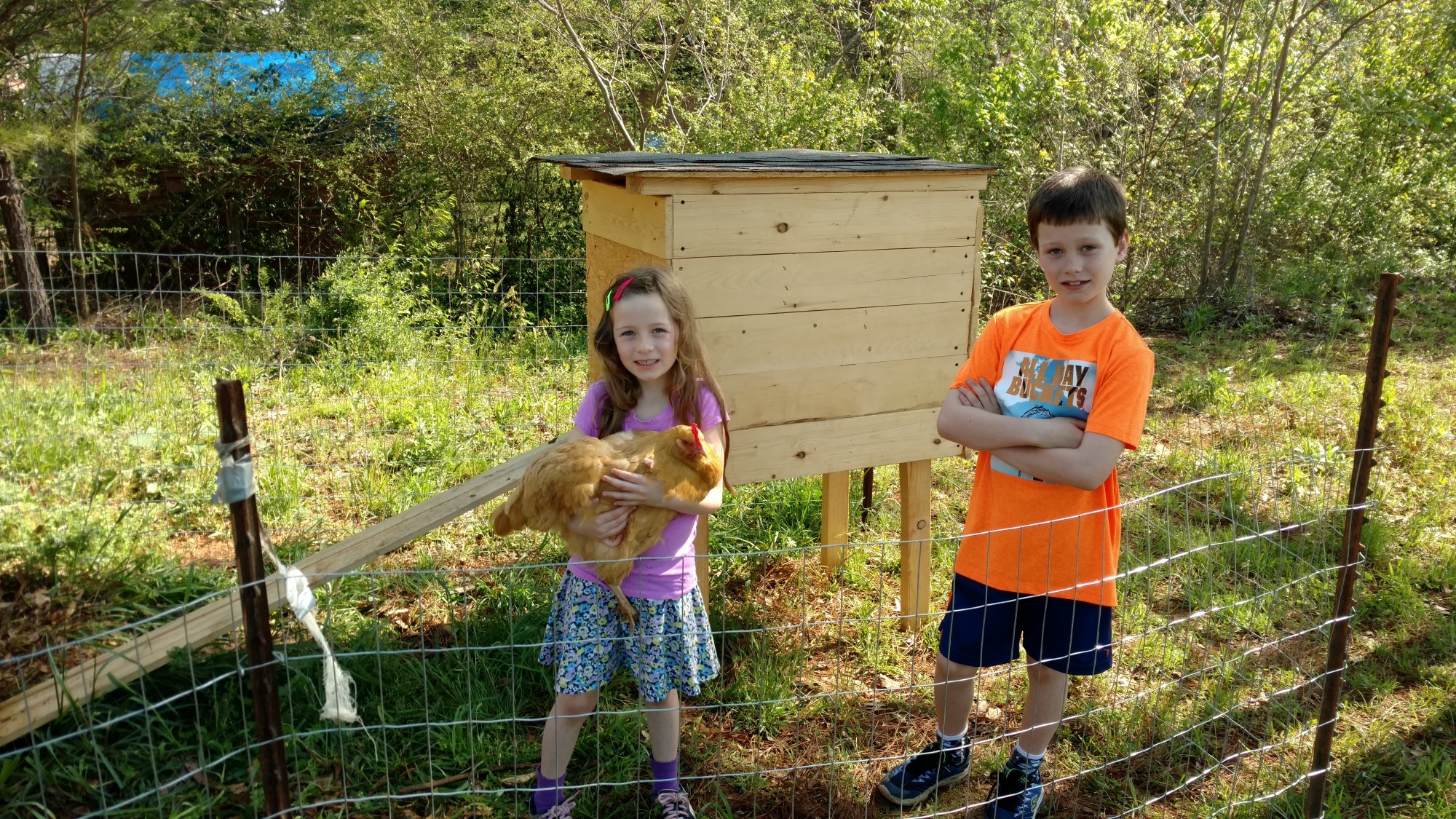 Great picture!! I'll definitely look more into those. I also have concerns that we live in a very "nature friendly" neighborhood. We have everything from Coyotes to foxes in our back yard. Are there some tips and tricks for making sure that our girls stay safe?

Only that fencing will probably be one of the largest expenses that you will have as part of the upfront costs. There are a few very good recommendations as far as how to put up your fence, but I would recommend burying as much as 1' of fence in the ground, or pouring concrete along the perimeter of the fence about 6" deep and then anchoring the fence in that while the concrete is still wet. The reason I say this is that foxes will dig pretty deep to get in to eat those chickens.
There are a few creative ways to help arm against chicken attacks. Having a fenced in yard (perhaps a 1/2 acre or something) and have a chicken-freindly dog in that enclosure and the chicken coop and run inside that fenced yard but not up against one of the sides. So basically it would be a fenced enclosure inside a fenced enclosure. Now this requires getting a dog that won't get lazy to guard duty, that is ok with the chickens and won't spoke them, (because constantly panicked chickens will be unhealthy) and that yet still won't run when he/she sees a fox/coyote.
This just requires alot of training of both the dog, and the chickens.
You could also do the double fence enclosure without a dog and the fox or coyote might not dig as vigorously if they can only see the chickens from a distance - which you could help by planting trees and bushes to help hide the coop & run area.

Having a rooster will also help. Mine are fiercely protective and yes, will attack a fox/coyote to death to protect his hens. (a good one will) But then you have to check with your county/city regulations and/or HOA regs (if you have one) because many do not allow a rooster.

Just off the top of my head - some other ideas - the outer fence could be an electric fence. Just be sure that neighbors and neighborhood kids know that it is electrified.

There are pros & cons of anything you try. Some people raise chickens successfully without using any of the methods above. Some even let their chickens "free range" and out in the country where there are loads of foxes and coyotes and they don't have big problems with them. Other people take great measures to prevent attacks and still loose chickens regularly.

Keep researching and you will something that works for you!

Secure coop and covered run are essential in areas with high predator populations. Sadly everything loves chicken, and not in a good way. Electric fencing is a very good way to convince predators to move on to another chicken coop.
Share:
Reddit Pinterest Tumblr WhatsApp Email Share Link