Hobnob - l will miss you greatly

This is a thread about my wonderful pet chicken named Hobnob. I loved him so much. Sadly, he was killed by a fox on 1st of June. You were a great chicken, Hobnob 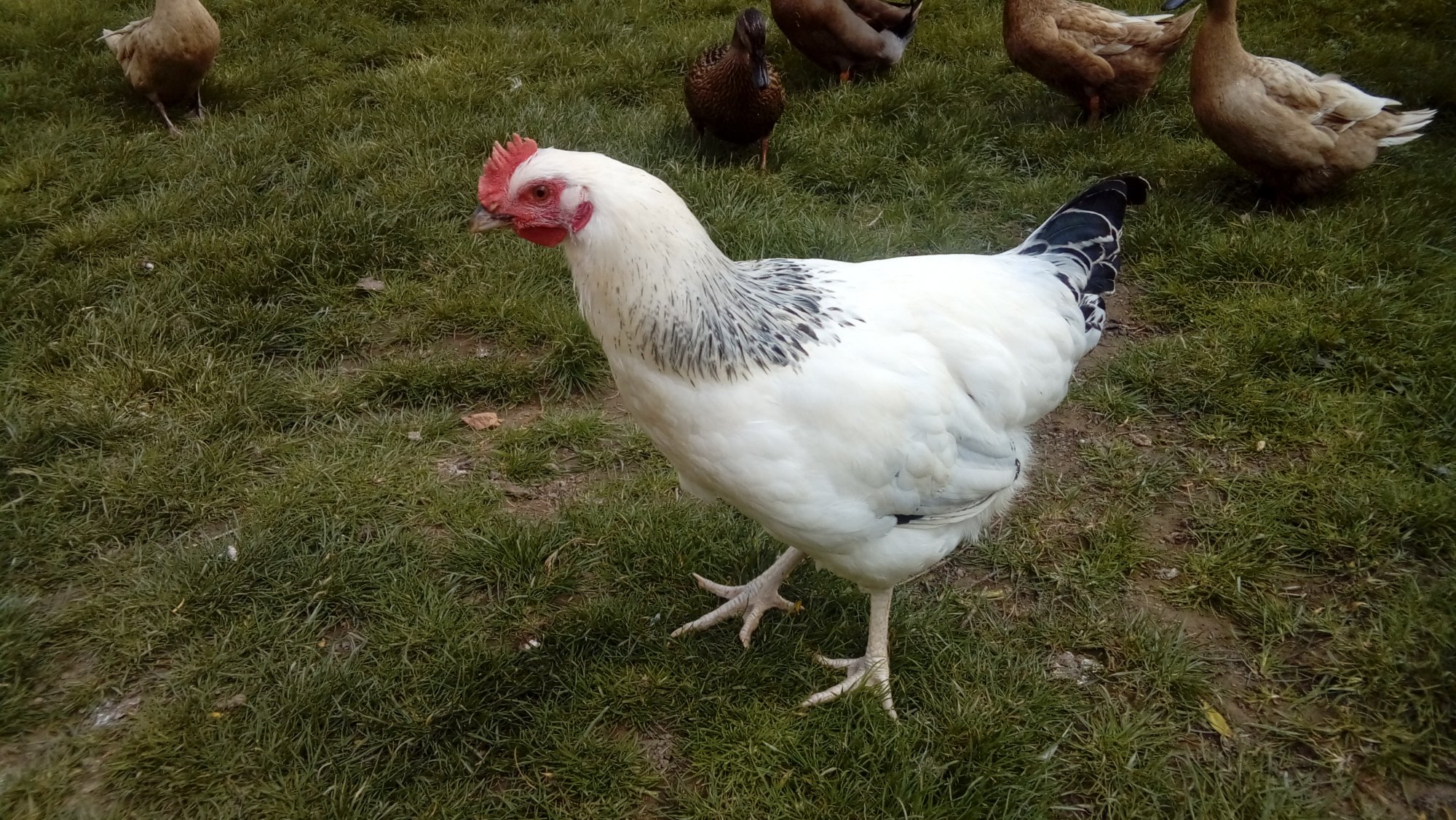 Hobnob's Story
Hobnob was a bit of a surprise. We had a hen that was broody and she was sitting on eggs that other hens had laid in the chicken pen. She was really quiet so I suppose we forgot about her, until one morning I went out there and heard cheeping. I looked under the hen there was a fluffy yellow chick! I ran inside and told my mother and we both moved her to a proper Broody House. One other egg was pipping, and another one had started to unzip. We left her for a few moments and then checked on her. The broody hen had killed the chick, which was really shocking. I had to save the other chicks. None of the eggs apart from the two were anything. We couldn't hear any movement so we left those eggs. We put the two eggs in a box lined with items of clothing and put them in the Airing Cupboard which was the warmest place we could think of. I turned our Brinsea incubator on and when it was warmed up we moved the two eggs into there. Later that day they both hatched. My mother said they could live in my room! Hobnob was the first to hatch. I made a little brooder out of a cardboard box with a normal lamp shining down on it. Hobnob seemed happy, and he was happy when his sibling-chick joined him. They were both alive when I woke up the next morning. The sad thing was, it became obvious that Hobnob's brother had something wrong with him. He gaped all the time as if he couldn't get a breath. He was worse in the evening and when I woke up the next morning, he'd passed. Hobnob seemed sad after that. He didn't like being on his own. We found a little soft toy Tigger and put it in the broody with him. Hobnob loved Tigger. You could tell, because whenever you moved it away, Hobnob started to cheep sadly. Tigger stayed with him in the brooder night and day. It was very cute. Hobnob grew quickly and it wasn't long before he needed a bigger cardboard-box-brooder. When he got to about 2 weeks old, I made him a whole home out of cardboard boxes and he loved it. I think there were six boxes; some were big and some were little. I put it right next to my bed. One room had a rock to perch on. One had a mirror for him to admire himself in. One was a hall way with 1p coins to peck at. One room had a soft toy pig. One was his 'dining room' with his food and water. And the last room was his bedroom, with the lamp and Tigger. I took Hobnob all over the house. Sometimes he came to our living room and sat under a blanket on my lap. Sometimes he went in a big cage in the kitchen while me or my mother did things in there. The only thing I had to be careful about was the two cats. I can't quite remember how long Hobnob lived in my room for. I could've been 4 weeks. Then I had to face the fact that he was too big to stay there. We moved him outside and into a run in a pen with three cockerels for company. We kept him in the run because the three cockerels (who weren't fullgrown) would've picked on him. Hobnob did start to get a little boisterous and he flew at your hand if he was hungry. Hobnob didn't stay in the run forever. When he was big enough to be safe from the cats, we moved him in with the ducks. I think the ducks were a bit surprised but they didn't mind too much. Hobnob was let out round the pond during the day and shut in the duck house during the night. He lived with the ducks so long I'm pretty sure he thought he was a duck. One thing about Hobnob was: he was a very, very, very late developer. I was quite sure he was a cockerel because of his temperament but he had very little comb and wattles, no interest in the hens, and he didn't crow. It got to the point where I half expected to go out to the duck house and find a little egg! I did actually post a thread on BYC asking if he could possibly be a hermaphrodite. The person who replied said it was unlikely. One day Hobnob seemed to suddenly realise he was a male and his comb and wattles got a lot bigger, he started covering the hens, and he started to crow. I remember hearing his first crow. It was hilarious. It sounded like a dinosaur in pain. It didn't take long for him to start crowing properly though. Hobnob didn't only cover the hens; but the ducks too! I'm sure he thought he was a duck! June the 1st was a sad day. Me and my mother were out most of the day, and when we got back we saw poor, poor hobnob, surrounded by his white feathers. The fox had jumped over the electric fence, killed Hobnob, but hadn't managed to get him back over the fence. I was very, very sad. I loved Hobnob so much. But I keep telling myself he had a wonderful life, living outside. And I'm sure he's happy up in Heaven. Everything's quiet without him- every time I look at the ducks I think of Hobnob. I think the ducks miss him, too.
I love you, Hobnob and I'll remember you forever and ever.
​

It's always hard to loose an animal. Especially one like Hobnob.

Thank you Hamiam. It is hard

So sorry for your loss! It's evident that he knew he was loved and while his life was short, it sounds like it was very full!

Thank you for the reply

How sad. Sorry for your loss.

Awwww what a wonderful story! Thank you for telling us about your dear Hobnob and I am very sorry for your loss. He knows he was loved

How do I get over this death?