My hen just hatched a clutch. Three out of five survived. Based on colors I’m pretty confident one is female and one is male. The other is probably male but I’m unsure.

My chickens free range so the rooster has the run of the three acres while my hen is in a pen with the chicks until they are grown.

So will I have to get rid of one of my roosters if The chick turns out to be male? Or is the yard big enough that they shouldn’t bother each other? Aside from chicks I only have the one rooster and one hen.

The rooster is friendly to my husband. And he will kick me if I forget to put a hood on (I have bright red hair). He hasn’t shown aggression to the hen that I’ve seen. And one time a duck got out of her pen and he just stood on top of her. 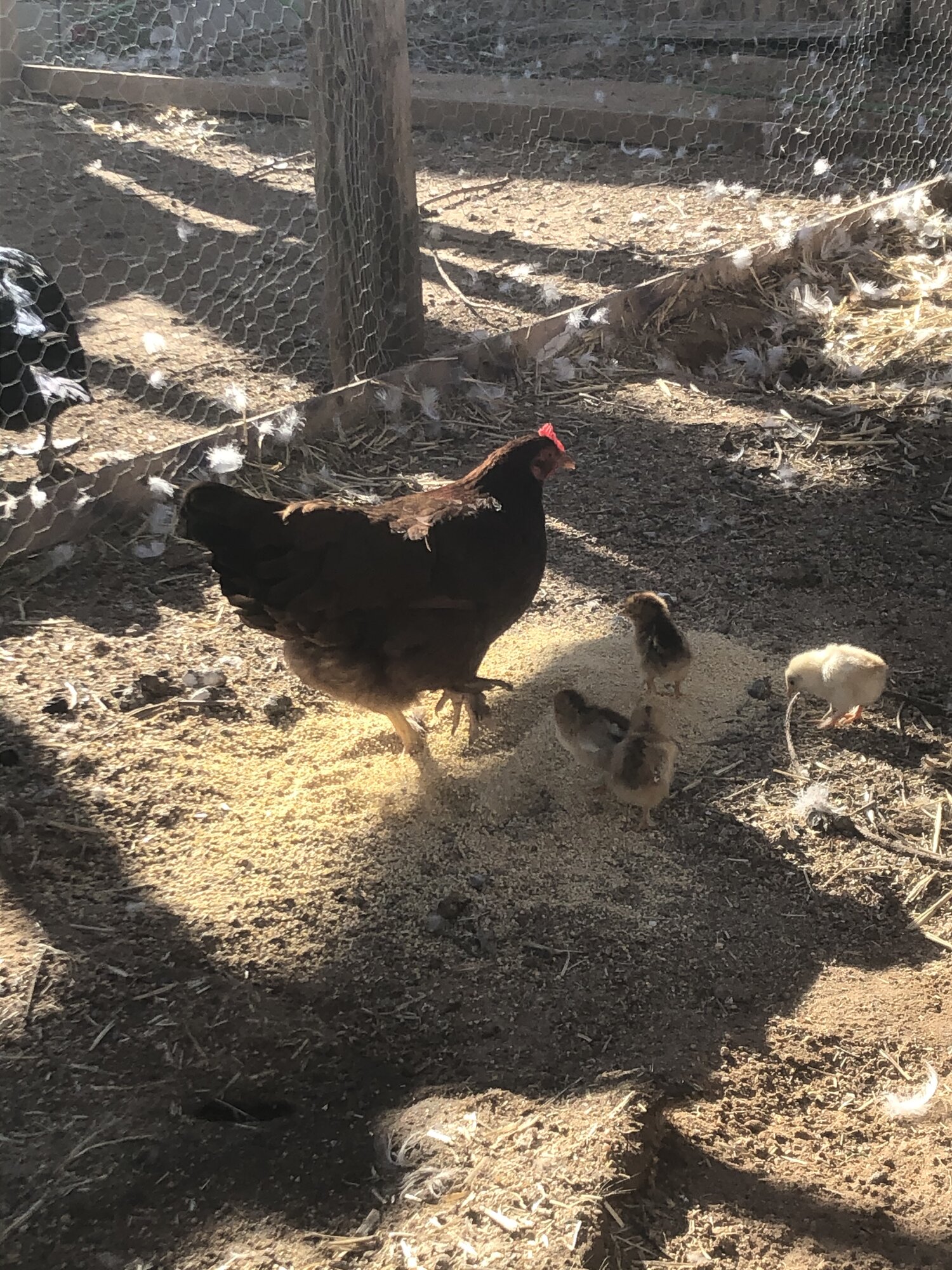 How many hens do you have? In general I'd say no you do not need to get rid of any roosters in regards to space. My only concern would there not being enough females to keep multiple boys happy. Breeding will most likely cause fights if there are not enough hens to go around. Them boys can be greedy at times.

Dfarago said:
My hen just hatched a clutch. Three out of five survived. Based on colors I’m pretty confident one is female and one is male. The other is probably male but I’m unsure.

My chickens free range so the rooster has the run of the three acres while my hen is in a pen with the chicks until they are grown.

So will I have to get rid of one of my roosters if The chick turns out to be male? Or is the yard big enough that they shouldn’t bother each other? Aside from chicks I only have the one rooster and one hen.

The rooster is friendly to my husband. And he will kick me if I forget to put a hood on (I have bright red hair). He hasn’t shown aggression to the hen that I’ve seen. And one time a duck got out of her pen and he just stood on top of her. View attachment 2008155
Click to expand...

What are your dame and sire with regards to color... unless sex linked or auto sexing, I doubt gender can be indicated at hatch.

Honestly, I would get that hen and chicks back to her rooster sooner rather than later. Right now he will protect them and call them to food, most likely. It's in his nature to do so. It's in just about every creatures nature to LEAVE their parents once maturity sets it. It's one way nature prevents excessive inbreeding which causes diminished fertility, immunity, life span and increased disease and deformity. It really is NOT a problem with poultry until after several years of close inbreeding siblings. Sire to daughter and Dame to son mating is commonly used in line breeding to help set certain trait. Blah, blag, blah.. sorry!

If not... hmmm... kicking the female or any keeper is not REALLY acceptable and can seriously diminish a keepers happiness.

Once any (of the new) cockerels mature and start trying to mate their dame and siblings... your current sire *may* ignore and tolerate it until the cockerel decide to step up and actively challenge him... but they may learn simply top avoid him. Spring time can really bring the fight out in the boys... but each situation and chicken is unique. It's never a problem until it is. So plan ahead now or simply deal with it IF the need arises...

Honestly that's too many boys for your girls to live comfortable in most situations. You might consider adding in a few sexed pullet chicks from a feed store... the next time your hen goes broody, just adopt them in the middle if the night. Or consider rehoming or eating any extra boys or allowing someone else to if you're not opposed but not ready to do it yourself either. Best wishes, whatever works best for you!

Congrats on your mama hen and her new family!

ETA: Some roosters can and do live peacefully together most of the time! I keep a stag pen for eating and breeding, but some folks are keeping them as pets also.

You won't know until you know lol!
Roosters are weird, even if you for sure had 2 boys and it was 6 months in the future the answer might not be there.
They're just that odd.

I have seen relative good luck in a father /son set up. It is not a father loving a son, as in people, but rather the son, generally is submissive to the father, and growing up in the flock. If is is going to work, (no guarantees) a father/son have slightly better odds, if the son is raised up under the rooster in the flock.

I second the opinion, of letting the broody hen and chicks with the others ASAP. Otherwise the broody hen herself will become a stranger, and have to fight her way back in. Most generally, the broody hen will be pretty tough if any thing gets too close to the chicks, and by the time she looses that, the others have accepted the new birds into the flock.

Thank you all for the advice. As far as adult chickens I only have the one rooster and the mother hen. He comes over to the pen to visit his hen and chicks and spends a portion of his day with them. So I don’t think re introducing them is going to be a problem. Unfortunately I can’t get new chickens because everywhere I would get chicks would be traveling through the quarantine zone

. I’m not in it but it would be a lot of excessive travel to get around it and to me it’s not worth the risk.
The reason I think it’s a male and maybe two females is they have the same colors the parents did when we got them. So that’s my only real indicator.

I see 4 chicks there?
You'll know gender in 4-8 weeks by comb color.
Whether males will get along will take 4-6 months.

Since the mother hen is red they are not red sex links. You cannot sex them by color. You could have three cockerels there, three pullets, or any combination in between. Only time will tell. And since some are red and one is yellow, at least one parent has mixed genetics. Probably the rooster.

I personally let my broody hens raise their chicks with the flock. My flock typically consists of one mature rooster, a few adult hens, and several immature chickens of both sexes and varying ages. My broody hens protect their chicks from the other flock members who are usually not that aggressive toward the chicks anyway. Sometimes the rooster helps the broody take care of her chicks but usually not. With that big of a flock mine often has other things to do.

In your situation with only one hen and one rooster I'd expect him to take a much more active interest in the chicks. You don't get guarantees with living animals and their behaviors, each one is different, but I'd expect him to find them food, help keep them warm, and protect them. The younger they are when introduced the more likely he is to see them as his and take care of them. I don't know how you lost those two chicks, how big your broody pen is, or anything else, I can't suggest letting him in the pen or letting them out to free range, but I'd do one or the other.

Assuming you have at least one cockerel, and 7 times out of 8 you will have at least one with three chicks, no one can tell you for sure what will happen when they mature with that mature rooster. They may fight to the death. It may go pretty peacefully. Most likely there will be some violence, no telling how violent it will be. I think two things improve your odds, lots of space and them growing up together. That growing up together could be father-son or as siblings. From what I've seen there does not need to be any blood relationship. A mature rooster typically accepts any young chick as his until it matures enough to see it as a rival. I've hatched eggs from other sources, hatched chicks from my flock, and gotten hatchery chicks. It pretty much plays out the same way.

On the hen to rooster ratio. Some people keep one rooster with 25 to 30 hens. Some keep flocks with a very few hens to roosters. They can have the same issues. There is nothing magic in these ratios. I will mention that there is usually a huge difference in the behaviors of cockerels out of control when the hormones take them over during puberty to how a mature rooster typically behaves, but some never grow up.

I typically suggest you keep as few males as you can and still meet your goals. That's not because you are guaranteed more problems with more roosters but that problems are more likely with more males. I think it is prudent to not push your luck too hard. But I also suggest you make your decisions based on what you see., not what someone like me over the internet tells you what you will see. But I also strongly suggest you have a Plan B ready, in this case a place to quickly isolate a male if you see a need. That need may come up very quickly.