how much room does a turkey need? also, how many females per male?

i am building a new coop for all my birds. i currently only have one turkey(male) but i don't want him to be lonely in the new coop. i plan on getting him a few girls but i don't know how many girls i need for one turkey. i don't want any bare back turkeys. he's not aggressive at all so a minimum would work nice for him. also, if i'm going to get more turkeys i need to know how big to make the run. so, how many square feet per tukey do i need? i already know i need 2 feet of roost per turkey.

Two hens are fine. We keep up to seven in a ~35x40 ft. run and all roost in a 7x8 ft. shed. Most of time is spent out of run but they'll return to it to hang out during day (think they feel safer). The more room the better. Some good info:
http://albc-usa.org/downloads.html

does that meen about 200 square feet per turkey? also, is there a way to tell male from female when they are babies? a friend of mine has some that he would give me but they're not sexed.

Flock Runner wrote: does that meen about 200 square feet per turkey? also, is there a way to tell male from female when they are babies? a friend of mine has some that he would give me but they're not sexed.
Click to expand...

Give them as much room as you are able to finagle. We also put up roosts (2"x2"s) where fencing `corners', at about 4` ft. (6ft. welded wire fencing), the toms roost but usually don't fly out. If the hens want to go, they will (`we don't need no stinking assists!'). Some folks use netting - our runs have Hickories/White Oaks in and around them so that's not a viable option. Having additional room/roosts comes in VERY handy when the jakes/toms decide it is time to rearrange the pecking order and start to spar with one another (losers can run away and roost above the fray). Two methods (without flipping day olds over and digitally everting their insides) of sex determination. One: skull shape (phrenology 101

), I've gotten pretty good at sexing by observing the `dimensional heft' of wk. old's heads: males tend toward a more `blockish' shape and females more streamlined `Ovoidal' (appropriately...) - I'm doing better than can be accounted for by chance, so far. Two: those 1.5wk. olds that start to make more than the occasional attempt at strutting are almost always male. Had a bad feeling about this poult, last week, when I took this shot (would prefer another hen). Royal poult with `block head'. Sure enough, the past two mornings he's been out attempting the strut 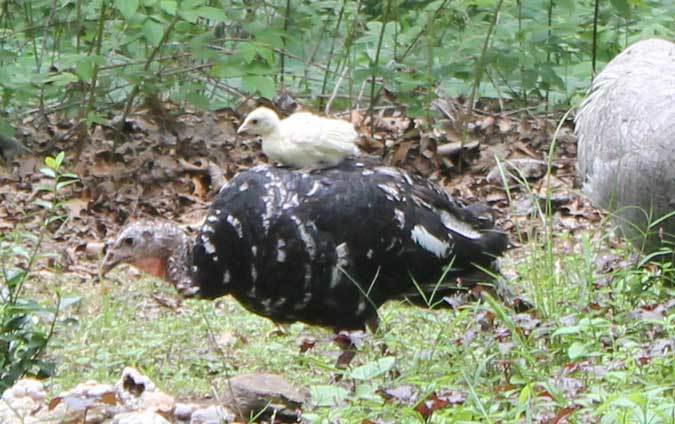 As far as the housing: we put up an EZ Framer shed. It has served as nesting/brooding/roosting location for up to seven turks, over the years (7 is our accepted limit on adults): Out of the 17 I am Raising I thats what I will keep for breeding is 7.
C

Just received my first turkey poults, Midget Whites, yesterday. Was wondering the same question: How much room is necessary as I will have to get rid of some of these.
I know I won't have enough room.
I've been working on a coop which has floor space of about 8'x11' with an enclosed structure above thats only 3x8' (click to enlarge) .
I wanted to place it on high ground where there was grass, but hubby doesn't want to mow around it, so it's now setting on a brick patio. Will they need alot of wood chips and/or straw for scratching in?? I will let them out to free range when they're big enough but was wondering about the inside flooring matter.
The lower portion is half inch hardward cloth up to 3' and then above that is chicken wire. I was told turkeys like to poke their heads thru and they predators can bite it off...and that racoons like to reach in and pull them right up tight to kill them.
They are such sweet, affectionate and curious little birds...I already like them better than chickens. But I love my chickens.
C

just making a small note so I can "subscribe" to the thread if there's a reply.

I wish that I could help with this question but I have no idea. Mine free range all day.

I would like to allow that, but I live on a pretty busy road, right now we're getting lots of extra traffic because of construction on another road. Bummer. I've only got an acre and alot of it is house, polebarn, garage etc. We also try to garden but I don't know how thats gonna work now what with some of my chickens knowing they can leave the fenced area by flying over it...

Thinking of adding a couple turkey's
2 3